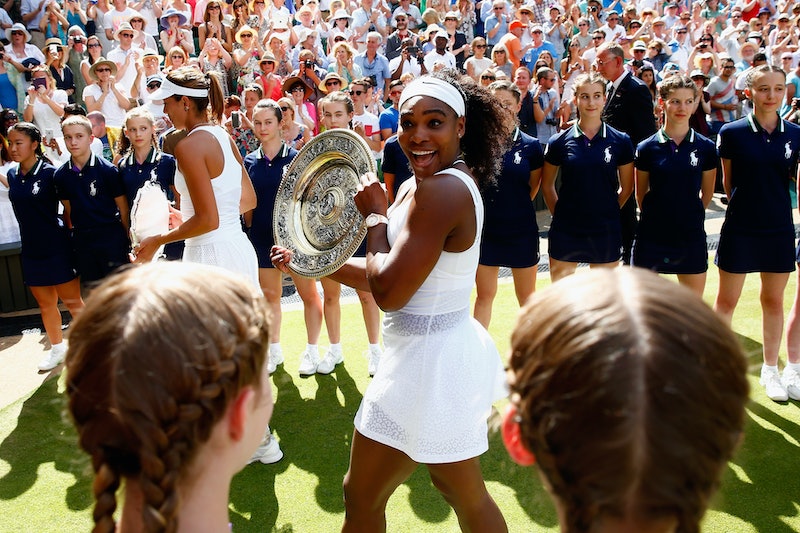 On Saturday, what had already been a phenomenal sports week capped off with a climax that kept American women on the world's center stage — Serena Williams won Wimbledon, securing the 21st Grand Slam title of her career, and her fourth straight. It's not as if anyone really needed more evidence that they're watching one of the greatest athletes of all time, but she went out and proved it once again. So, what's next for Serena Williams?

Well, luckily for anyone who enjoys damn good tennis, you'll have a chance to see her take the court again, and it won't be too long. Williams will be playing in the 2015 U.S. Open in Queens, New York, at the end of next month, barring any injuries that might prevent her from entering. It's scheduled to begin on August 31 and run through September 13, and if she's the last woman standing at its conclusion, she'll have secured one of the rarest feats in pro tennis — a clean sweep of all four Grand Slam tournaments in one calendar year.

In other words, you absolutely won't want to miss it. It's not as though her legacy is in dispute — regardless of whether or not Williams can seal the deal at the U.S. Open, she's clearly on one of the most dominant runs in the history of her sport. She just wrapped up her second career "Serena Slam" (four straight Grand Slam wins regardless of the year), a feat so special that it's named after her.

But to go four-for-four in the same year would be an epically rare accomplishment, and honestly, it's one of the few things Williams could do to burnish her reputation even further. She'd join Maureen Connolly Brinker, Margaret Court, and Steffi Graf as the only women to get it done. By way of comparison, only two players on the men's side have ever accomplished this, and not since 1969.

A win would also give Williams 22 Grand Slam titles, tying her for second all-time with Graf. She's then be just two behind Court, who holds the all-time record for the most Grand Slam titles in tennis history, male or female, at 24.

In other words, Williams' 2015 U.S. Open could be a triumphant exclamation point on her best-ever year, and could bring her one step closer to the ultimate tennis immortality. It'll be tough, no doubt — she's already 33 years old, which is way past prime in conventional tennis terms. But Williams is anything but conventional, and when you watch her mentally and physically dominate on the court, it's hard not to expect at least a few more of these.

More like this
Prince William Reveals Charlotte's Hidden Talent In Ultimate Proud Dad Moment
By El Hunt
7 Expert Tips For First-Time Pickleball Players
By Carolyn Steber
The Nike & Jacquemus Collab May Have Been Inspired By Princess Diana
By Frances Stewart
The 10 Best Longline Sports Bras, According To Reviewers
By Danielle Calma
Get Even More From Bustle — Sign Up For The Newsletter