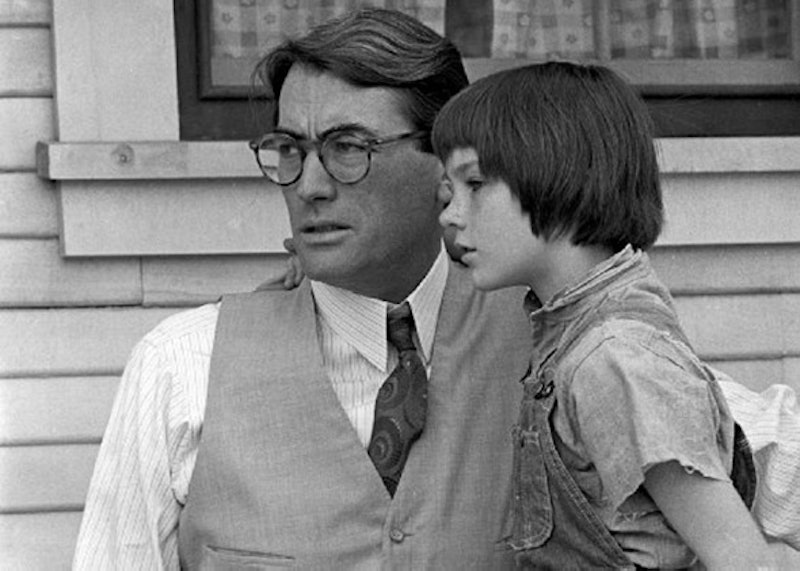 Early reviews of Harper Lee's upcoming Go Set a Watchman have raised a question no one expected: Is Atticus Finch a racist? The man whose actions and wisdom in Watchman's predecessor, To Kill a Mockingbird, made him something of a symbol for all that is good and just is now being called a "racist" and a "bigot."

If you grew up admiring Atticus for his strong moral compass, I hate to be the one to tell you, but Watchman , which comes out on July 14, may break your heart a little. I haven't had a chance to read Watchman myself yet, but those who have provided pretty damning evidence. A New York Times review refers to Atticus as "an aging racist," explaining that Watchman reveals he was formerly involved with the Ku Klux Klan, views African-Americans as lesser than whites, and supports segregation.

A Wall Street Journal review paints the same picture, calling the book "distressing" and "the toppling of idols." Atticus is quoted as asking Scout (who now goes by her real name, Jean Louise, but I can't bring myself to call her that), "Do you want your children going to a school that’s been dragged down to accommodate Negro children?" It's an ugly side, to say the least.

To me, Atticus was about tolerance. In Mockingbird, I remember him teaching Scout and Jem (RIP) that "you never really understand a person until you consider things from his point of view... Until you climb into his skin and walk around in it." The idea of him as a racist is a hard one for me to wrap my head around.

In essence, Watchman sounds like another hard but realistic lesson from Lee — for Scout and for us. People aren't perfect, not even the great Atticus Finch. Yet "[his] complexity makes Go Set a Watchman worth reading," says a The New York Post review, pointing out that Scout viewed her father through the eyes of a child in Mockingbird, but she learns to love him in spite of his flaws as an adult in Watchman. George Stephanopoulos added on Last Week on July 12 that "it enriched the experience of To Kill a Mockingbird and makes Atticus Finch an even more deeply [sic] human."

Interestingly, Watchman was actually written before To Kill a Mockingbird, so the Atticus with whom we're familiar was born from this earlier version. Lee's publisher was intrigued by the flashbacks to the trial referenced in Watchman and encouraged her to rewrite her story to focus on that period of Scout's life instead.

When Go Set a Watchman is released on Tuesday, we'll all have a chance to read the story she originally wanted to tell, and then form our own opinions as to how this impacts To Kill a Mockingbird and Atticus' legacy.