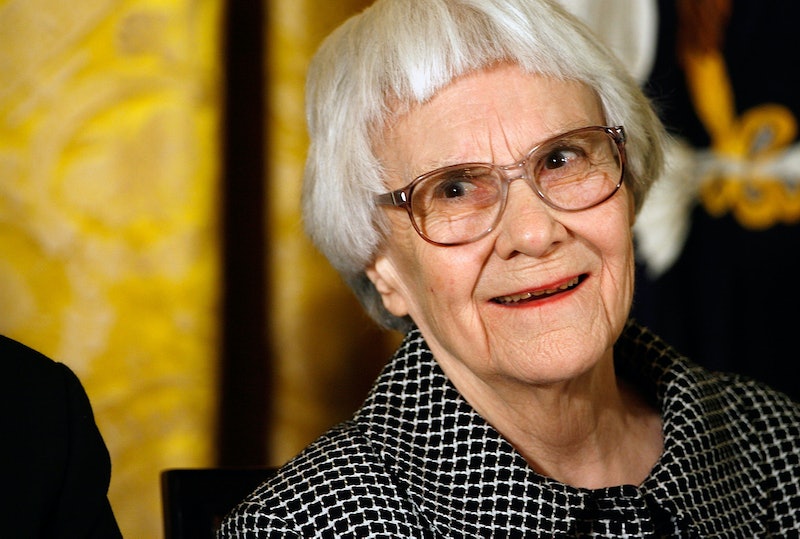 I've already read the Go Set a Watchman excerpt, and I highly encourage you to do so as well (even if you're one of the nine zillion people who have pre-ordered the book already). There's nothing quite like dipping back into a favorite fictional world. Returning to Maycomb with Lee's tomboyish heroine is like coming home again.

From these opening pages, there's a good chance that that Lee's sequel will be just as dynamic and meaty as To Kill a Mockingbird . The first chapter is stuffed with revelations that show just how much the cast of the 1960 novel has changed. While you wait for July 14 to roll around, here's a look at the seven biggest surprises in the Go Set a Watchman preview.

Lee's heroine isn't fighting to be called by her Christian name; everyone seems to accept that she's outgrown her childhood moniker. But the first chapter of Go Set a Watchman doesn't mention "Scout," at all. Hopefully, we'll hear the story of how and when Scout became Jean Louise later on in the novel.

Some things may have changed, but don't worry. Even though she's dropped her old nickname, moved to New York, and taken up golfing, Jean Louise is still the Scout we all know and love.

She's still a tomboy. She "still move[s] like a thirteen-year-old boy and abjure[s] most feminine adornment." Jean Louise wears slacks and loafers, knowing it will ruffle her Aunt Alexandra's feathers.

What's more, she's still the same sarcastic smart-aleck she always was. When she's told — all in good fun, of course — that she doesn't know how to act like a proper woman does toward a man, Jean Louise goes all-out: "I agree with everything you’ve said. You are the most perspicacious individual I’ve met in years, you are six feet five, and may I light your cigarette?"

There's a New Man in Jean Louise's Life, and His Name Is Henry Clinton

That's right: Jean Louise has a boyfriend, and he isn't Dill Harris! Henry Clinton is described as a "lifelong friend" of the Finch siblings. Although we never met him in To Kill a Mockingbird, he moved to Maycomb before the end of that novel, as a boarder living across the street from the Finches.

Hank — as Jean Louise calls him — is a World War II veteran and lawyer set to inherit Atticus' law firm. Since his teen years, he has been practically raised by Jean Louise's father, who looked after Hank's money and helped him to find work after his mother's death.

However, as Go Set a Watchman makes clear, Jean Louise isn't a little sister in Hank's mind. He loves her and wants to marry her. She refuses, however, reasoning that, if she did marry him, it would only be a matter of time before her soulmate sauntered in. Whether Jean Louise and Hank's relationship survives to the end of the novel or not, the first chapter has set readers up with a deliciously angsty love affair.

To Kill a Mockingbird was rife with wounded characters, from Jem's broken arm to Mayella Ewell's horrific home-life. From the first chapter, it appears Go Set a Watchman intends to continue this tradition.

Hank bears a pink scar across his face and wears a partial plate where his upper front teeth were knocked out. Both come from an injury he sustained during the war, which Hank claims was a German rifle-butt to the face, but Jean Louise doesn't seem entirely certain that's what happened. We'll have to wait to find out what really happened, but I'm sure it'll be worth it in the end.

Yes, you read that correctly: Jem. Is. DEAD. He died suddenly, shortly after the war ended. Jem isn't mentioned by name in the novel's first chapter, and his death is described as a horrific event, but it's spoken of only briefly. Hopefully, over the course of the novel, we'll learn more about how Jem died and what kind of man he was before his passing.

Atticus Is Alive, but He Is Not Well

In Go Set a Watchman, the winner of literature's World's Greatest Dad Award is 72-years-old. He's now living with rheumatoid arthritis, and he's almost entirely dependent upon Alexandra for his basic needs, such as dressing and shaving. Atticus doesn't make an appearance in the first chapter, and, to be honest, I'm dreading the moment he does. It's painful to hear about it secondhand; I don't want to see Atticus suffering.

Dill Harris Is Nowhere to Be Found

The absence of one of Maycomb's quirkiest characters is tangible, and it left me with a lot of questions. It's not like I expected him to stay in town and remain true to his promise to marry Jean Louise, but his erasure is entirely unanticipated. So, I'm asking seriously: WHERE IS DILL?!

More like this
The 20 Best Audiobooks To Fall Asleep To
By Aoife Hanna and K.W. Colyard
A 'Bridgerton' Star Just Dropped A Major Hint About Joining The Live-Action Barbie Cast
By Bustle UK
Akwaeke Emezi’s Romance Is *The* Book Of Hot Girl Summer
By Shahed Ezaydi
10 Must-Read New Books Out This Week
By K.W. Colyard
Get Even More From Bustle — Sign Up For The Newsletter