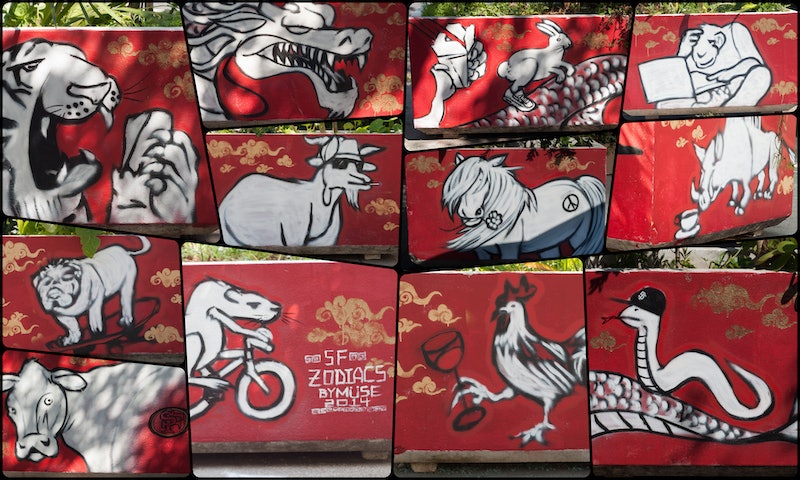 You’ve probably seen the disposable placemats at a Chinese restaurant — the ones with pictures of twelve animals representing birth years that have a brief personality description, often using words like “shrewd” or “vain". It all might appear a bit silly and fortune-cookie-like, but it's more than that: there's astrology involved. Each animal makes up a part of the twelve-year cycle of the Chinese calendar, known as the Zodiac, or Sheng Xiao (which means "birth likeness"). The Zodiac creatures were even once used to date the years on the agricultural calendar, which runs alongside the lunar calendar. Now they are used to describe our characteristics, strengths, and weaknesses, all based on the year we came into the world.

According to Chinese astrology expert Joey Yap, these symbolic animals are names for positions of groups of stars in different constellations. A scholar named Hong Xun from the Song Dynasty (960-1279) arranged the animals into six yin and yang pairs — for example, the Snake is the Yang to the Dragon’s Yin. They are fixed in a complementary order, according to the perceived attributes.

Westerners tend to think the Chinese focus solely on this system in order to determine a person's destiny. But experts encourage us to read up on our birth month and hour in conjunction with our Zodiac analysis so that we have a full understanding of ourselves. So let's start with your birth year: read on to see what it says about you.

Folks born in these years, including Julia Roberts, tend to be a bit shy and sensitive to the world around them. They are calm and gentle, but don’t be fooled by the exterior — Goats have strong opinions of their own and have the resilience to defend what they believe in. Indecisive and disorganized at times, their creative side needs to be nurtured.

The first two terms used to describe Monkeys are quick-witted and intelligent. It’s common for them to have magnetic personalities and they’re quite clever. However, they can be mischievous and naughty, even if it comes from a harmless place. They are the ultimate pranksters and sometimes hurt people’s feelings by teasing a little too much.

Roosters are active individuals who enjoy outdoor sports. They are confident — sometimes to a fault — and don’t shy away from sharing their latest achievements with people around them. Hardworking, resourceful, and courageous, they make the most loyal friends and rarely let you down. It's not uncommon for them to be eccentric individuals.

The lucky flower for this Zodiac is the rose. Loyal and honest, sweet and sincere, Dogs like Ellen Degeneres and Kelly Clarkson enjoy good health and lots of happiness. However, they don’t fall in love easily and experience emotional ups and downs; when they do commit, though, they do everything they can to maintain the relationship.

When trouble makes its way around, people born under this Zodiac sign remain calm and handle things carefully. Their concern for others shines either through their career path or everyday deeds. But it’s not typical for Pigs, diligent yet naïve, to have many friends in their lives. Despite popular opinion, they're not lazy, but they do hate arguments.

The Rat holds the first position in the twelve-year Zodiac cycle. They’re quick to respond and can easily fit into new environments, and women born in these years are often said to be pretty and smart. That being said, roles of leadership don’t come naturally to them — they’re opportunistic, picky, and sometimes can’t rid themselves of narrow views. They do thrive from healthy social lives, though.

Family and work are important to Oxes. They are ambitious people who combine physical and mental strength with the trust that things will always work out — they're positive people. As a result, they will see success in their lives. Nobody’s perfect, though: They're stubborn and aren’t the best communicators, but they do tend to stay in longterm relationships. President Barack Obama and Rosa Parks are both Oxes.

2015 is said to be a good year for the competent Tigers, who are associated with the earthly branch symbol. They can pretty much handle anything that comes along, and they accept challenges without complaint. In China, Tigers are said to be “the king of the animals,” so they like to be the center of attention. Answering to others isn’t their forte; they like to be the boss of things.

Who doesn’t like rabbits? Individuals with this sign are lovable beings who are elegant, polite, and hardly discouraged by the chaos around them. They are probably artistic and have enviable style — like Johnny Depp. What they should always be wary of is losing themselves to daydreaming and holding back from speaking their minds.

Think ambition, dominance, and intelligence, like Danaerys Targaryen from HBO’s Game Of Thrones . Also, Dragons are hot-headed and sometimes get so carried away with themselves that they lack self-awareness. They’re risk-takers and are known to be open and giving with everyone. Expect generosity from these folks, even if they’re not open to your criticism.

Snakes are the most enigmatic animals in the Zodiac cycle. They’re amazingly intuitive and wise beyond their years, but they don’t like to share too much about their private lives. They don’t take failure well (tell me about it) and have a love for the finer things in life — nice clothes, swanky house, etc. Stress doesn’t sit well with them, so it’s best for them not to juggle too many things at once.

People born in these years love a crowd, and you won’t be surprised to see them regularly attending concerts, sporting events, and parties — in other words, they’re popular. They have an easy-going disposition and use a sharp sense of humor in conversation. (Think Ashton Kutcher.) Horses certainly have enough self-esteem; it’s actually difficult for them to care much about other people’s problems.