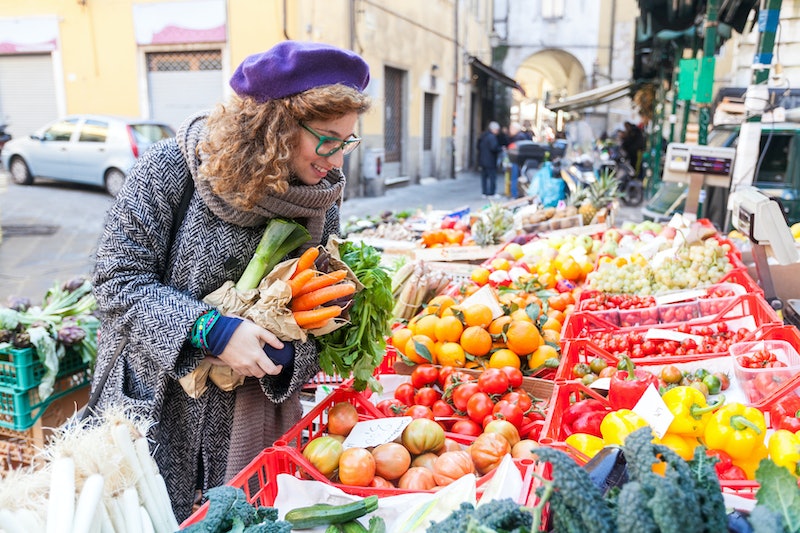 Since it's 2015, we all know by now that we should be eating plenty of fruits and vegetables every day — but unfortunately knowledge doesn't always result in action. Depressing new results published by the Centers for Disease Control show that Americans have plenty of room for improvement. As reported in Time, only one in five Americans is currently eating enough produce (according to government dietary suggestions) — that means 80 percent of us aren't. This problem is bigger than any juicing fad can touch, so we're going to need some serious habit changes instead.

To be fair, fruit and vegetable consumption levels do vary state by state, as reflected in the CDC document, Morbidity and Mortality Weekly Report dated July 10, 2015. In my new home of California, where much of the country's produce is grown (at least until we run out of water), people do better. Yet "better" means 13 percent of Californians met daily vegetable requirements, as compared to to Mississippi's 6 percent compliance rate. I'm not sure why Tennessee hates fruit so much (8 percent compliance), while California manages a sort-of-respectable 18 percent. But basically everyone is coming up short.

Even if the government's fruit and vegetable intake guidelines are too generous, the fact that Americans ate less than 1 cup of fruit and less than 1.5 cups of vegetables daily between 2007 and 2010 suggests that we still need to eat more for optimum health. The CDC suggests that businesses and workplaces should do more to establish norms of fruit and vegetable eating and accessibility. But why would they? Fruits and vegetables cost more, require more preparation, are more perishable, and people don't seem to want them.

Inconveniently, though, lack of interest in fruits and vegetables doesn't seem to be primarily a problem of access. The myth of the "food desert" is persistent but leads us away from the true causes of poor nutritional choices: culture, habit, and preferences. Plenty of people claim just not to like vegetables especially. They formed these preferences in their homes and neighborhoods growing up, and habit change is notoriously difficult. Throw in the fact that we're probably evolutionarily disposed to prefer calorie-dense, fatty and sugary foods, and it's very easy to understand why the modern human eats the way she does.

Still, eating some fruits and vegetables is better than none, so do what you can to work in your favorites whenever possible. Part of the problem is that more stimulating foods crowd out our hunger and stomach space, so if you can start a meal with a salad, vegetable soup, or a piece of fruit, you'll be more interested in it. And hey, look on the bright side: it won't take much to put you in the top percentiles of fruit and vegetable eaters in the whole country! This is one health competition that you can definitely win.