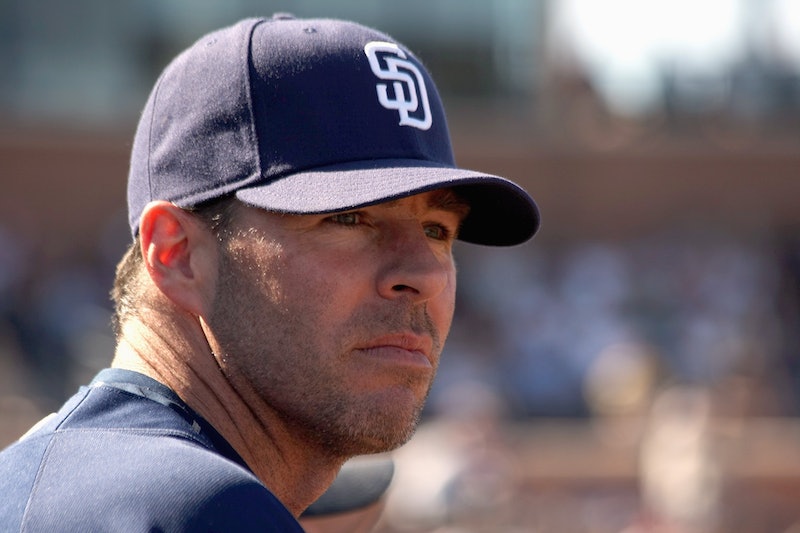 The Edmonds family is already blowing up The Real Housewives of Orange County . Meghan King Edmonds has gotten into several huge arguments with Shannon Beador about telephone etiquette, with no easy winner or loser to point to, while her husband, Jim, has remained relatively out of the show so far, but is still pretty interesting while one the periphery. But maybe these Jim Edmonds facts you didn't know will make you appreciate the guy even more. While he may have gotten off on an awkward foot in the premiere, when he seemed kind of gruff towards Meghan, it seems like this couple really do love one another, and they both also have a secret weirder side (which you probably need to survive reality TV).

Even though Real Housewives has alerted fans to the basics about Jim, so far, most of his screentime has been devoted to whatever Meghan was doing. And hey, that's a good fact to know: he supports his wife! But beyond that, Jim is actually a pretty interesting guy, and there are plenty of new tidbits that might be revealed on the show, or that you can find out from looking at his Instagram, which is filled with pictures of his kids and corny but sweet messages about Meghan, or from his baseball career.

While Jim's pedigree as a baseball star is unquestioned, on RHOC discussion of his career has focused on his time playing for the St. Louis Cardinals. It makes sense, because both his wife Meghan and RH producer Andy Cohen are from St. Louis, but over the course of his career, Jim played for the Anaheim Angels, San Diego Padres, Chicago Cubs, Milwaukee Brewers, and Cincinnati Reds, according to the very handy Baseball-Reference.com.

2. He Has A Very Silly Nickname

The baseball facts just keep coming — Jim was such a famous and good player that he was called "Jimmy Baseball" (also found on Baseball-Reference) or "Jimmy Ballgame," via SB Nation's St. Louis Cardinals section. I feel like a particularly evil caption editor on RHOC could do wonders with that information.

3. He Briefly Owned A Cop Bar

As you may already know, Jim is a restauranteur in St. Louis. But when his steakhouse F15teen closed, he and his business partner reopened it as a sports bar called "The Precinct," going for a police theme that naturally drew cops as some of its most loyal customers. Unfortunately, that wasn't enough to keep the place open, and it closed in 2015.

4. Orange County Is Basically His Hometown

While Jim and Meghan now live in the fancy Newport Beach in a mansion, Jim actually hails from Fullerton, California — which is also in Orange County. So this is like his homecoming.

5. But He Loves Southern Culture

That shirt, if there are any Yankees/musical n00bs like me reading, is filled with the names of some very notable country music stars (like Johnny Cash, Hank Williams, etc.).

Any baseball fans will instantly know this, but for Bravo fans who may be a little sports-challenged, Jim is left-handed, a rarity that made him a prized batter and a skilled center fielder.

7. His Latest Move With Meghan Was A Downsize

After buying the Newport Beach mansion, Jim sold his last home for $6.775 million, according to the LA Times. With just one daughter sharing their new home, the family of three doesn't need a huge place — especially because Jim isn't afraid of letting Meghan do some home improvements.

I'm sure we'll only learn more about Jim as this season of Real Housewives of Orange County continues.