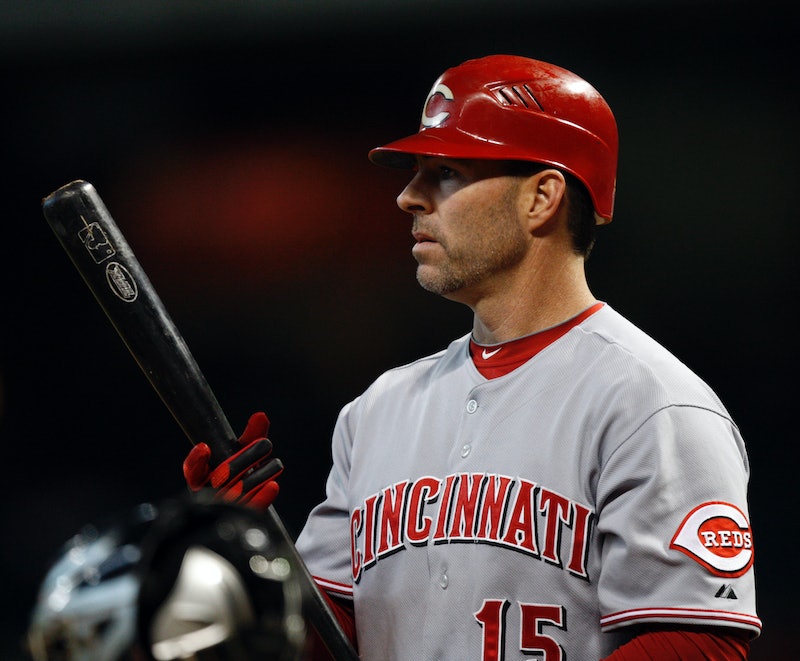 I've never been a really big sports fan. (The Academy Awards are my equivalent to the Super Bowl.) However, ever since Meghan King Edmonds joined The Real Housewives of Orange County , I've become obsessed with every aspect of her life — and that includes learning all about Meghan's husband and former baseball player, Jim Edmonds. And when I say baseball player, I don't mean that he just took this up as a hobby. This guy was basically a center field superstar back in his heyday, having played for the Los Angeles Angels of Anaheim, the St. Louis Cardinals, the San Diego Padres, the Chicago Cubs, the Milwaukee Brewers, and the Cincinnati Reds. Suffice to say, he's kind of a big deal, which got me thinking about what Jim Edmonds' overall net worth would be.

Like I said, I'm far from being a sports expert, however, I know enough to understand that athletes pull in some pretty serious dough throughout their careers, which means this guy's total net worth was bound to be pretty impressive. And, as it turns out, I was right. Taking into consideration his 17-year MLB career, along with his current broadcasting job over at Fox Sports Midwest, Edmonds' net worth reaches a whopping total of $35 million, according to CelebrityNetWorth.com. (Is it too late for me to start majoring in baseball?) And while that number is certainly an incredible accomplishment, there are plenty of ways he can help increase that figure to even greater heights. Such as…

Being Part Of A Reality Series

Now that his wife is starring in such a popular television series, Edmonds' own popularity should increase as well. He may be well known through the sports industry, but dabbling further in the entertainment business could open him up to a whole new fan base. And with great fame, comes great money.

Given everything that he's accomplished throughout his baseball career, now would be a great time for Edmonds to give fans an in-depth look at his journey to MLB glory, along with any personal details he cares to unveil. So not only would he be turning a nice little profit, but he'd also be giving the world an up-close account of who he really is behind the uniform.

Edmonds knows firsthand the ups and downs that come with being on a professional sports team. Why not put that knowledge to use by helping others who are currently going through the same exact thing? It'd help to get his name out there and be remembered throughout the next generation of athletes.

Getting In On The Advertising Game

Athletes are always seen promoting products on various ad campaigns. Edmonds could sign a deal with a sports brand and rake in a handsome profit because of it. The way I see it, it's basically a win-win.

Partnering Up With His Wife

Meghan is the brand ambassador and director of sales at Sweat Cosmetics. And while make-up may not be Edmonds' forte, he could certainly learn about the business side of things from his wife and reap some serious rewards because of it. Plus, how adorable would it be to see these two working together? As if we needed another reason to obsess over them.