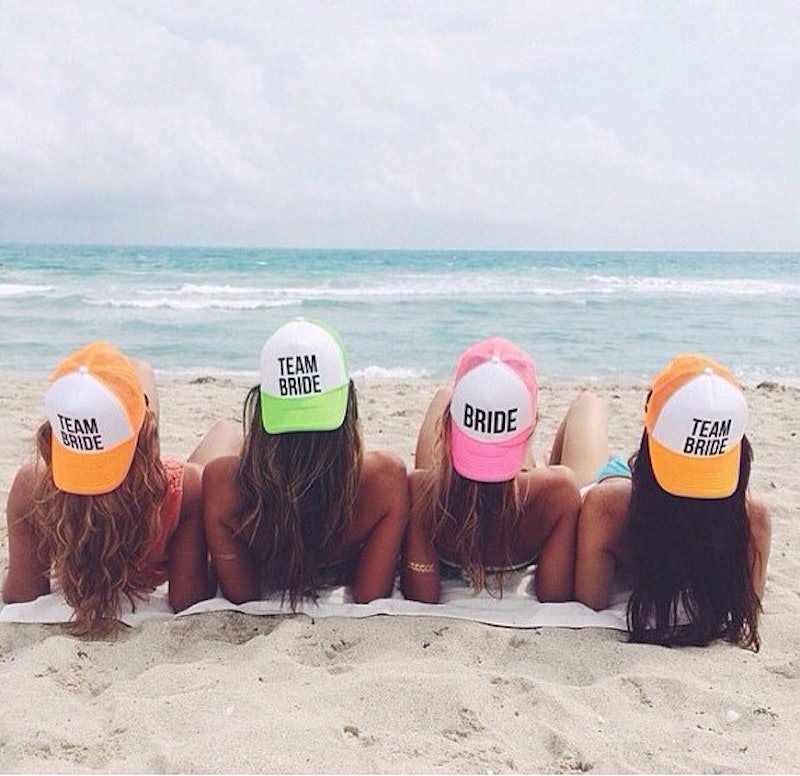 Bachelorette parties are not for everyone. Some brides would rather skip the whole stripper and booze-fueled bash and celebrate her remaining freedom another way. When that's the case, it can be tricky (as the maid of honor) to plan a bachelorette party for a bride who doesn't want a typical bachelorette party. Because at this point, the typical bach party is formulaic in the elements required to have a good time. All you need is two bottles of hard alcohol for each person attending, plus one costume veil for the bride to wear, plus three boxes of penis-shaped whatevers to toss around the room, plus (any number) of strippers. And there's your bachelorette party.

However, if your bride is averse to the club scene and taking shots upon shots and going all wild as a way to embrace her dwindling singedom, how do you even begin to plan a bachelorette party for her? You can't just do nothing. And despite how difficult the goal seems to accomplish, it can be done. You can give the bride-to-be the perfect bachelorette bash without doing any of the typical things she's not into. Here's how to plan a bach party that she will actually enjoy.

Maybe she's not interested in having a huge party, and would instead prefer to have a girls' night with her closest friends. Just to be safe, keep the guest list to less than 10, if possible. The smaller the list, the less pressure on the bride to make sure everyone else is having a good time — because that will certainly be a concern, especially if the party is not the usual bach party.

Incorporate her personal interests into the theme

If she's into yoga, plan a weekend yoga retreat. If she's a bookworm, go somewhere that brings her closer to her favorite characters and authors, like a historic library or a location prominently featured in her favorite book. If she's a craft beer connoisseur, take her on a bar crawl to her favorite pubs, or on a factory tour of her signature beer. If she loves the beach, plan a beach house weekend away with just the girls.

If she hates bachelorette parties, she is probably not interested in spending hers in a crowded, sticky club. If she just wants to have a few drinks and play board games all night, do that.

Pepper in some relaxation

Every single bride-to-be could use an extra dose of relaxation. Take her to a spa, or at least treat her to a soothing mani-pedi. She will love you forever for it.

Avoid all penis-shaped foods and decorations

This may seem like a bachelorette party staple, but if she's not into the classic bach theme, then penis-shaped products of any kind should be avoided. Maybe she'd be happier eating gummy worms that aren't shaped like genitalia, ya know?

Having a strange dude shake his dong in your face is a scenario that some people are just not comfortable with. So if that's not her thing, then there are plenty of ways to incorporate strippers that wouldn't weird her out. Go enjoy a double header of Magic Mike. I guarantee you, everyone will have fun.