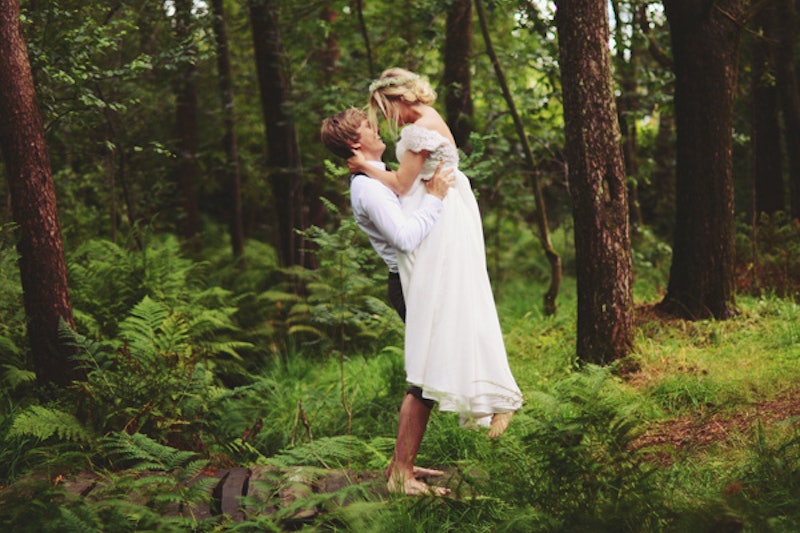 If you’re late to the party, and you might be, “bro-dal” showers are now a thing. If you’re like me, and wondering what the eff that means, then let me explain. Think bridal shower, but without the “bri,” so what do you get? “Bro-dal,” as in bros (dudes), throwing showers for their “bros” who are about to get hitched. Honestly, if women are throwing “bridal” showers, shouldn’t dudes get the same? Well, apparently, they are in some circles.

Never heard of it? Well this past weekend the editors from BuzzFeed, decided it was high time to throw a wedding shower for two of their guy coworkers. According to them, “because wedding traditions deserve to be f*cked with,” they went against the grain and made one hell of a bro-dal shower. What does one hell of a bro-dal shower entail? Well, at least with these dudes and their lumberjack theme brod-dal shower, sandwiches, trail mix, corn, s’mores, moonshine, and obviously cake. Honestly, having not had a bridal shower of any kind (I opted against it) this is something with which I can totally support. I mean, a chocolate cake shaped as a tree stump? Sign me the eff up. Now. No, seriously, I really mean now.

But bro-dal showers aside, what other wedding trends that need to happen now? Oh, here’s a few ideas to inspire you in your upcoming engagement.

Why the hell the not? If we’re really going to embrace equality, then we need to except that maybe, just maybe, a woman might want propose. Honestly, women can't wait forever for their partner to step up to the plate.

2. Bachelorette Parties Centered Around Anything But Penises

As someone who opted out of a bachelorette party, I just don’t get the appeal. Penis straws? Penis cakes? Penis whatever? Why? True story: A penis straw doesn’t make up the for that fact that you signed up for one penis for the rest of your life. In fact, it doesn't make sense at all.

I knew I had to give a wedding favor, out of tradition, but it just seemed silly to me. Did anyone want to go home with a set of matches with my name on it or a CD with my favorite music? Hell now. Instead, I just gave candy. People like candy. But more importantly, people like to go home without dragging something they don’t need or want with them.

If there was anything I learned from being engaged and getting married, it’s that matching colors are everything. Why? I don’t know! If you let go of the color scheme and just go with it, maybe brides can quit stressing out and have fun with it.

I once received a wedding invitation that gave me two options outside of “attend” and “will not attend.” Basically, they went for the jugular with “I plan to attend but won’t show without any explanation even though you already had to pay for me in the advance headcount,” and “I will attend if you give me a plus one, someone I barely know and you don’t know at all, will come with me just so I don’t feel alone.” It was glorious, spot on, and I can’t imagine anyone thinking the former thoughts could argue after those options. Weddings should be light and have a sense of humor. Kick old invitations to the curb.