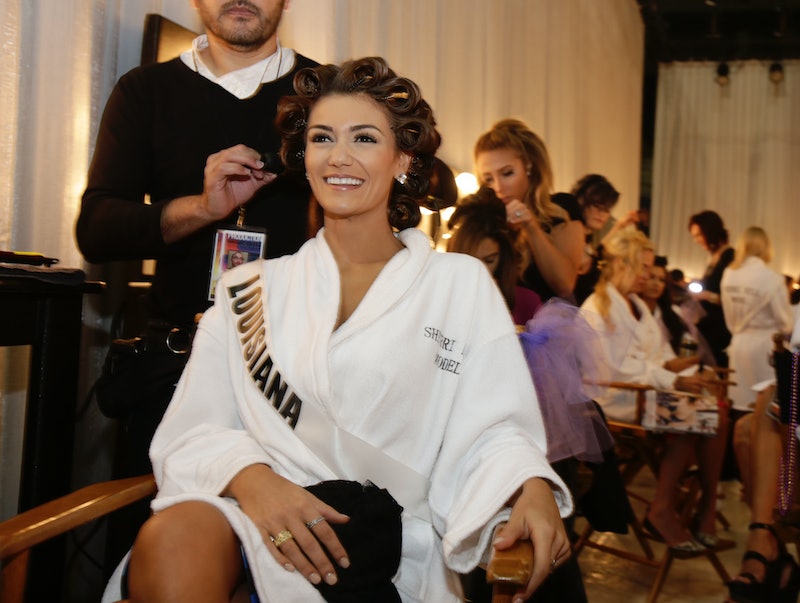 During the first hour of the 2015 Miss USA Pageant, viewers were shown short videos of each of the contestants who made it to the Top 15 that were meant to show us what exactly "makes each of them unique." In most of the videos, we saw what the women's home lives are like, what they're most passionate about, and the causes they support. Miss Louisiana USA Candice Bennatt discussed domestic violence in her video, and while it's incredibly brave of her to share her own history of abuse, and I respect her for supporting other survivors, her comments were extremely problematic.

"When people hear my story, they don't necessarily see me on the outside, and think that I could ever be a victim of dating abuse or domestic violence, but I was, and it just shows you that it could happen to anybody," Bennatt said as the video opened, and these remarks exemplify the issues with her statement. By suggesting that people don't think she could have suffered domestic abuse, Bennatt is insinuating that one's appearance could somehow affect their status as a survivor of such violence. Just because she's beautiful and has won beauty pageants doesn't mean that she cannot have experienced an abusive relationship, and by pointing out others' disbelief at her history, Bennatt is only perpetuating a false, harmful notion.

I know that Bennatt is trying to help other abuse survivors, and by bringing more attention to domestic abuse, as well as working with the Louisiana Coalition Against Domestic Violence, I'm sure she has, but if she wants to have as large and positive an impact as possible, she needs to leave appearances and expectations out of that discussion. "Domestic violence is something that's clearly evident in our society; we don't talk about it enough," she later said in the video. While a public figure like Miss Louisiana USA talking about it will certainly raise awareness, including problematic language brings its own problems.

It's clear that Bennatt is sharing this story in an effort to both inspire other survivors of abuse and inform others that domestic violence is a widespread problem experienced by people of all backgrounds, but there are ways to get that message across without including one's appearance. I hope that as Bennatt continues her work with LCADV, she is able to share her story in a way that is still truthful, but leaves out this false implication that those who look a certain way are less likely to go through this trauma.