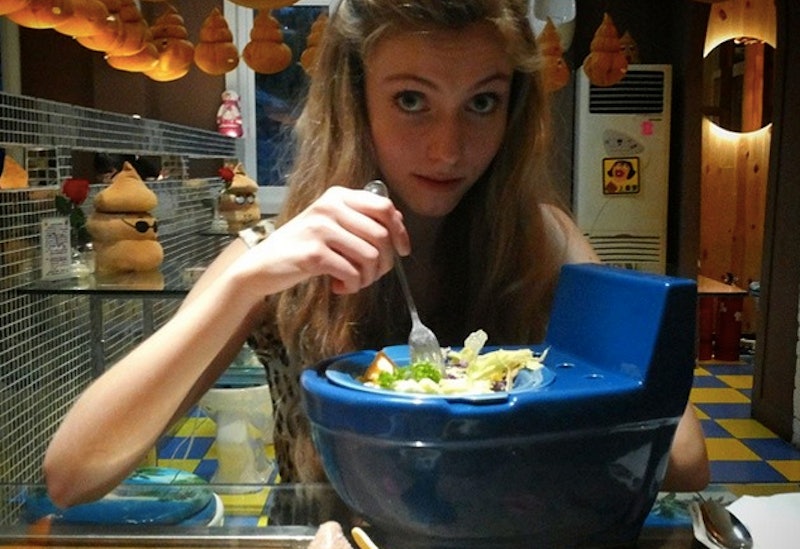 Dining out has so much squandered potential, IM(H)O. Too many folks regard it as an option for simply fueling up without having to prepare the food themselves. Or, it's simply an uninventive option for a date—literally a place to sit still with another human while other humans serve you both sustenance. Come on, restaurants. Although they're not widespread in most cities, themed restaurants continue to exist, much to the chagrin of their employees, I'm sure. And seriously? There are some rather ridiculous themed restaurants you probably never knew about.

There are a lot of "themed" restaurants, emphasis on the quotation marks. I worked at a "themed" restaurant that aimed to make sure groups of single guys got sat next to groups of single girls, everyone felt attractive, and most importantly, everyone got tanked. It wasn't a bad "theme," if we're being real, but it still deserves the quotation marks because there is much higher potential to be imaginative here, folks.

There's room for more creativity than Outback, too. I realize Outback is very committed to this pseudo-Aussie thing, but it still comes up a little weak. For example, did you know some restaurants pride themselves on staff that yells at you? How's that for a theme? Let's dive deeper:

Tokyo presents the charming opportunity to experience life as a mental health patient in this nightmarish prison-themed restaurant. Patrons are essentially bullied into cells with bars by guards dressed like sexy wardens or nurses (can't tell). Menu items include cocktails with fake human teeth and a sausage carved to look like a wang. Also French fries, apparently, judging from the above Instagram record.

With entree options such as Alien Burgers, you know someone's going ham on an intergalactic concept, right? Perhaps they could have thought a bit harder when naming various menu items, but Space Aliens Grill & Bar does boast 30-foot ceilings with a ceiling mural of various constellations. Plus it's in North Dakota, so it likely doesn't have a lot of competition entertainment-wise.

Clearly a Titanic-themed (the movie, not the boat/event so much) restaurant must exist—and not just in one location: there's one in Ireland and another in Australia. The LA spin serves sushi, which seems...a bit dark.

AN ACTUAL AQUARIUM YOU CAN EAT AND DRINK AND CHILL IN AND CAN I LIVE HERE PLEASE BECAUSE IT LOOKS PERFECT.

Upon arrival, patrons get a parka, hat, and gloves so they don't actually freeze inside. There are ice sculptures galore, and opportunities to warm up via soups and hot drinks.

Tucked into Chelsea somewhere (how did I never know about this place??), is a grub hub that gives Trailer Park Boys a run for its money. Everything is fried, illuminated by year-round Christmas lights and backed by "graveyards" (empty liquor bottles...a bit of lingo I sadly picked up just living life in The South). This place actually sounds like the total best, topped off by the fact a partial trailer is embedded in a wall.

I didn't wanna say this, but it's apparent: Tokyo has themed restaurants on complete and total lockdown. I tried to keep the number of Tokyo-based spots at a minimum, but it's seriously tough, given how many they've done and done FULLY. Biohazard styles itself after the Resident Evil video game franchise, taking on a zombie theme. And yes, there are dancing zombies to complete the dining experience. Also, brain cakes, I guess.

This super secret spot's been open and slinging drinks and food on the sly since the mid-'60s. Patrons must enter through an unmarked alley to access the espionage-themed bar. There's even an authentic KGB prison door welcoming (not sure if that's the right word, but OK) diners. Oh, and you need a password to access the joint after 8 p.m.

Yep, this place is modeled after the late metal band GWAR. If you're not too into the head banging community, perhaps you recognize the band from their cameo in Empire Records . Anyway, this place exists with ridiculous, bloody decor and food offerings that hardly line up—like smoked fish and avocado salad (which comes with popcorn. OK).

This place literally translates to "House Of Poo," which...it is. Soups are served in toilet-shaped bowls and meant to be enjoyed perched upon an actual, flushing toilet. So...there is that.