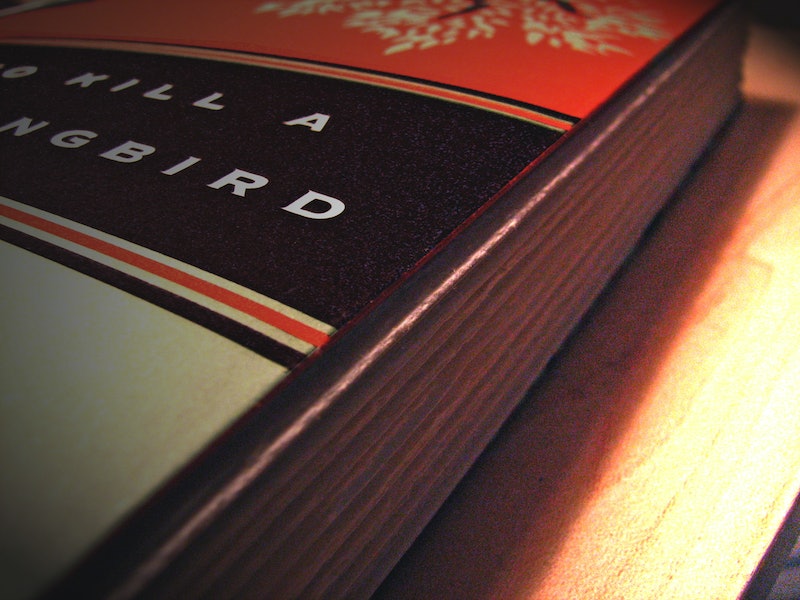 Scout Finch is one of the most memorable characters to ever grace the pages of literature. Never a gal to shy away from saying the unsayable, winning a schoolyard scrabble, defending her Tomboy-ish ways, or standing up for justice (knowingly or not), the daredevil who traded in the name "Jean Louise" for a much heartier moniker is definitely one of the heroes of To Kill A Mockingbird . Small in size, but mighty in spirit, the inimitable Scout is not only the novel’s narrator — the eyes through which readers have all experienced Maycomb, Alabama throughout the last 50-ish years — but she’s kind of fearless badass as well.

Now that the novel that’s all about Scout, Harper Lee’s Go Set A Watchman , is here, it's pretty much the perfect time to remember some of those moments when Scout threw caution to the wind, and did exactly what she thought was right (or, you know, what satisfied her curiosity in any given moment).

Here are six moments from To Kill A Mockingbird when the fearless Jean Louise Finch taught us all what it takes to be a total badass.

She Isn't Afraid to Say What She Thinks

For better or for worse, Scout isn't a girl particularly known for holding her tongue. Whether she's giving her first grade teacher, Miss Caroline, an education on the way things work in Maycomb, or discussing rape and racism with her father, Scout never hesitates to form an opinion, and share it.

She Always Gives the Boys A Run for Their Money

From her early days of keeping up with Jem and Dill, and getting into a schoolyard scuffle with little Walter Cunningham, to taking a swing or two in defense of her father Atticus' legal advocacy of Tom Robinson, Scout is never intimidated by prescribed gender roles of 1930s America. Plus, the girl can rock a pair of overalls like no one else.

She's Credited With "Knowing to Read Since She Was Born"

Much to her first grade teacher's chagrin, Scout was taught to both read and write cursive well before she arrived in Miss Caroline's classroom. While disheartened by the fact that these skills earn her a reprimanding on the first day of school, she keeps on reading and writing with the best of 'em. Scout isn't going to let anybody — especially the likes of Miss Caroline, who simply has no idea how the world works in Maycomb, Alabama — hold her back.

She Recognizes a Hypocrite When She Sees One

When Scout's third grade teacher, Miss Gates, discusses Adolf Hitler in class, stating, "There are no better people in the world than the Jews," Scout immediately makes a connection between Miss Gates' feelings about Hitler, and her open racism towards African Americans. Never one to be taken for a fool, Scout recognizes Miss Gates' hypocrisy, wondering how she can feel such a strong defense for the Jews of Europe, while holding such relentless hatred for the African Americans in her own hometown.

She Stands Up to a Mob of Grown Men

When a mob of shotgun and pitchfork wielding men pay a not-so-friendly visit to Tom Robinson's jail cell, where Atticus Finch is standing guard with little more than a novel and a reading lamp, Scout jumps in to save the day. Having followed her father to the jail, along with Jem and Dill, she runs to her father and Tom's rescue, deescalating the situation with some Scout-style conversation, and shaming an entire mob of grown men into hanging up their weapons and going home.

In true novelistic form, everything comes full-circle at To Kill A Mockingbird's end when Boo Radley kills Bob Ewell. Scout, in profound defense of Boo, defends Sheriff Tate's decision not to arrest Boo for the crime, noting to her father that charging Boo, and forcing the notoriously hermetic man to endure public court proceedings, for what was truly an act of justice, would be akin to "killing a mockingbird." Although Scout undergoes many a coming-of-age transformation throughout the three years that To Kill A Mockingbird encompasses, she definitely begins and ends a total badass.

I can't wait for Go Set a Watchman — and all the Scout badass-ness that's still to come.

More like this
16 Novels That Paint A Realistic Portrait Of Abortion
By K.W. Colyard
At 14, Jenny Han Wrote Rom-Coms About Her Friends & Fan Mail To Leo DiCaprio
By Alyssa Lapid
The 'Hocus Pocus' Sequel Finally Has A Release Date & It Makes Total Sense
By Shannon Barbour and Radhika Menon
Everything To Know About 'The Hunger Games' Prequel Movie
By Grace Wehniainen and Radhika Menon
Get Even More From Bustle — Sign Up For The Newsletter