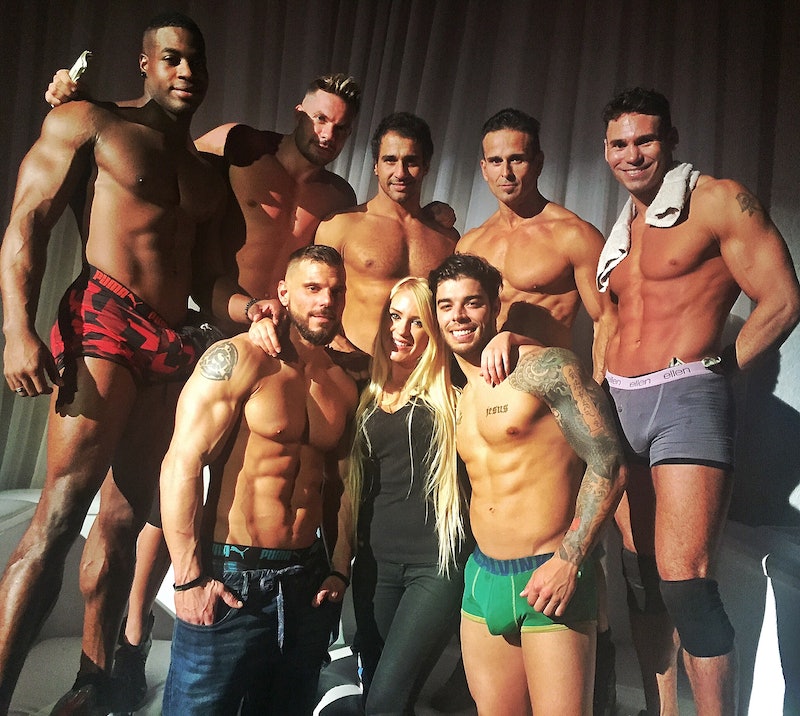 "I had a little old lady cut me with scissors once. She was trying to cut my G-string off," says Scott Layne, owner and president of The Hollywood Men male strip show. "I turned right into her and she stabbed me." But luckily for Layne, and the men who use their good looks, charm, and dancing abilities to earn dollar bills on Friday and Saturday nights, grandmothers smuggling sharp instruments are a rarity.

Arriving at Los Angeles' Supper Club on a Friday night to see my first male revue, the line outside the club explodes with young women. Ladies in high heels and minidresses clutch wads of dollar bills and grin from ear to ear. I wonder if it is their first time, too. I wonder whether they've heard this is the strip club that prepped Channing Tatum and his castmates for Magic Mike , or if they've been here a dozen times before, and those smiles are a product of knowing exactly how far their dollars will take them.

As I scramble to figure out where to enter, a limo pulls up in front of the venue, dumping an entire bridal party — adorned in miniature tiaras and petite white veils — onto the front steps of the club. A woman to my left approaches the bouncer: "How would I go about buying my friend a lap dance?" she asks. There is a palpable sense of excitement surrounding the entry to the club, and an excess of estrogen and Chanel No. 5 clouds my senses. Up until this point, the closest I've been to a strip club was a midnight showing of Magic Mike . But tonight I was going to get up close and personal — very personal — with a handful of male entertainers to see what all the fuss is about.

My mind is running wild with scenarios that are all some variation of this: I'd be plucked from the audience and dragged on stage, strapped into a bondage-type contraption — spread-eagle — and be sprayed with whipped cream from head to toe. But as Layne assures me before the show, real male strip clubs are nothing like the acts audiences see in Magic Mike XXL. "Magic Mike is heightened reality — it just doesn't happen like that," the former Chippendales dancer says. "The audience they portrayed in the film is totally unrealistic. They portray women as sex-deprived, flesh-toned ATM machines," he says, noting that an opposite approach is taken at The Hollywood Men.

"Women are the show here. I put them on a pedestal. It's not a misogynistic thing. Women are here to be treated like ladies and respected. In [Magic Mike], they did just the opposite. Women don't want to have whipped cream sprayed all over their faces. They don't want to be raped on stage or put in a bondage rack and f*cked like an animal, it was appalling in the second film how they portrayed women," he says.

I admittedly enjoyed the second Magic Mike film quite a bit, but am intrigued by Layne's pro-women statements, and anxious to get the show started. Entering the club, the first thing I notice is the seating arrangements, or lack thereof. In place of chairs and tables, the sunken stage is surrounded by a bevy of beds (not unlike a memorable Sex and the City episode) covered in white linens and plush pillows. "I wanted to provide a place not just for ladies to go out and ogle over good-looking men, but a place where they can be ogled over by good-looking men," Layne says. "The ladies are the show, and we are the catalyst." Providing women with cushy beds to relax in certainly helps set the tone. "Whatever I can do for to improve their experience, I will. Women view this type of entertainment differently than men do. What I like to provide is a place where ladies can let their hair down."

And the male dancers in the show agree — the night is all about the ladies. Mario, who's been dancing with The Hollywood Men on and off for six years, portrays a rock n' roll cowboy on stage. "Here in Hollywood, we get up close and personal," he says. "Unfortunately, there are a lot of rules. It's a male revue show, and we're all adults here, but there are still rules. We can't get too crazy. In Magic Mike they did everything. We are limited to what we can do. We do lap dances, but we aren't supposed to simulate sex ... It's a fine line."

As Mario references, in the Magic Mike films, women are utilized — quite intensely — in every performance. Layne echoes these claims: "There's a little bit of harmless debauchery, a little spanking, but it's all in good taste," he says of The Hollywood Men. "But the movie has the wrong portrayal of women and their reactions. If you treat a woman with respect, that's when the money comes out. The director of the film obviously has no idea what a male strip club is like. They don't shower money ... they want to stick it in."

Andre, a blonde and oh-so-built dancer from Milan, credits The Hollywood Men with his ability to live in the United States. "It was the first job I got," he says. "This job gave me a chance to have a normal life with a working visa. They are my family." He also emphasizes the importance of making each individual woman feel special. "When there's a crowd of hundreds of women, how does that work?" I ask. "I studied marketing in my country," he says. "It sounds weird, but I use marketing techniques here. There are certain ways to talk to women, to play with them. It takes skill. I use my Italian passion, eye contact of course, and the most important thing is a genuine smile. You have to show them that you're having fun and enjoying their attention." In tonight's show, Andre plays a vampire, complete with a coffin and a finale in which he — wait for it — showers on stage.

After I'm seated in bed, a shirtless man in little more than a bow tie approaches to take my drink order. A large screen displays photos of tonight's dancers intercut with a reel of one-dollar bills falling in slow motion. The room is almost exclusively white, save a faint pink tinting from the overhead lights. Layne, who is also the show's emcee (Think the Matthew McConaughey to Channing Tatum's Magic Mike), takes the stage, and the women go wild.

"Are there any birthday girls tonight? Cause we'll let you practice blowing out the candles backstage," he jokes, finishing his opening monologue with this doozy: "... so open your thighs and fantasize!"

More uproarious applause, and the women — I truly don't see a single male in attendance — are given their first flesh offering: a group number, featuring six core dancers and very little clothing. "There's longevity for certain characters. There will always be room for a fireman or a policemen, all those hero routines. You can always revamp them with new costumes for music, but if it ain't broke, don't fix it," he says. "But then along comes Fifty Shades of Grey, and obviously you're gonna glom onto that. The way I taught our guy to do [the routine] is you focus your attention to only the girl on stage. That way the girls watching can vicariously live the fantasy because they are privy to that privacy."

As promised, firemen (carrying a young woman out on a stretcher) and cops (or, as a giant screen says, "cocks") are in attendance, along with a Spartacus-inspired number, Mario's rock n' roll cowboy routine, a Latin lover dance, and, of course, Andre's wet n' wild vampire act. While a flimsy, often brightly colored G-string lies beneath, many layers of clothing adorn every man before he gets to that crucial bum-exposed moment. A few strippers even wear their heritages proudly on their perfectly sculpted bums. "Brazil" and "Italia" cover up bright red and green G-strings. "I usually have the costumes made. Or, if it's a costume that's a real uniform, I want to go with authenticity. So I'll go on eBay to get firemen helmets, and if they're beat up, all the better," says Layne. "One thing I don't like is too much velcro, because it breaks the fantasy. Women like natural, attainable fantasies. There's nothing sexier than seeing a guy bend over and take his pants off, but as soon as it's 'rip!' you can't get into the fantasy."

Layne not only emcees the show, but is also the company's accountant. Additionally, he does its music editing, visuals, web design, and choreography, and he builds the props for every set. "My dad was a woodworker, so I learned how to be a carpenter. I like to build things in my free time." During the show, every act is paired with a woman's participation on stage. Whether she's strapped into a makeshift bondage prop or a stretcher, the audience's involvement is key. But unlike in the fantasy world of Magic Mike, if a dancer goes too far on stage, there are consequences. "If a guy goes up on stage and embarrasses a woman, he's fired," Layne explains. "I fired the best-looking guy in my show, who used to do the Christian Grey act, because he was drunk and took the role to another level. She came off in tears. It was a bachelorette party, and this was the girl's last night of freedom, and she leaves in tears. I fired him."

As the show progresses, more bow-tie-clad men make the rounds, making sure women aren't without a drink in their hands. A rock version of Ginuwine's "Pony" comes on the speakers, and the crowd goes, for lack of a better term, apeshit. A man dressed all in black — perhaps he works in security? — catches my eye. He smiles at me as he walks by, and continues to glance back at me until he eventually turns a corner. I wonder if I have genuinely caught his attention or if he is simply employing the same "every girl is special" mentality Andre educated me on earlier.

As the final act draws to a close, the music suddenly cuts off. The dancer, Ricky, pauses for a moment, unsure of what to do. Layne quickly jumps onto the mic: "Let's give him a beat!" he commands, having women clap their hands in unison. "It turns out someone was stepping on a cable that carried the audio feed," the seasoned emcee tells me after the show. "Part of being a performer is improvising when necessary, and Ricky handled the issue quite nicely. When you look like he does, women don’t really care ... as long as he ends up naked."

As the show ends, women swarm the stage, anxious to claim their "grand slams" — a lap dance and photo with the dancer of their choice — and I take it as my cue to vacate the magical, sweaty, wonderland. But as I reach the door, I hear a familiar voice: "Are you leaving?"

I turn around to see Mario, in nothing more than his undies, pouting. "I didn't even get to give you lap dance!" he laments.

While I didn't get a lap dance from Mario or his six-packed friends, you certainly can. Catch The Hollywood Men every Friday and Saturday night in Hollywood.

More like this
Dakota Johnson Reveals Why Filming Fifty Shades Was “A Battle”
By Rachel Mantock
Daryl McCormack On His Unusual First Audition With Emma Thompson
By Olivia-Anne Cleary
Hannah Khalique-Brown Has Her Sights Set On 'Strictly'
By Frances Stewart
Sadly, You Can’t Stream 'Minions: The Rise Of Gru'... Yet
By Morgan Leigh Davies
Get Even More From Bustle — Sign Up For The Newsletter