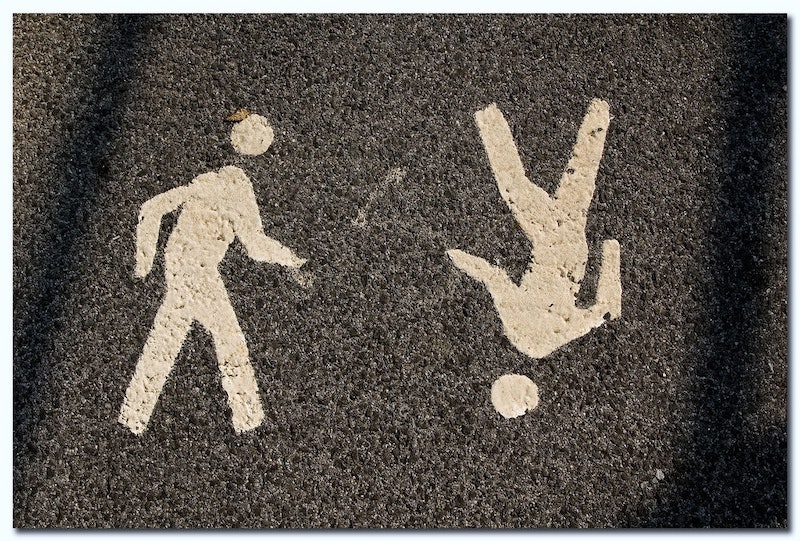 When people say "mankind," "brotherhood," "fireman," and other masculine "generics," people get that these words don't actually mean only men, right? Not always, according to a recent survey of about 1600 Redditors by University of Helsinki linguist Laura Hekanaho. More than a meaningless sound, the word "man" often serves to exclude women and gender-nonconforming people. Even when people understand they're meant to be neutral, Hekanaho argues, "the use of masculine generics in English supports a male biased world view as women are, lingually, invisible in these generics."

While most (98 percent) of participants in the survey viewed "mankind" as an all-encompassing term, only 42 percent considered “All men are created equal” gender-neutral, only 48 percent considered “All men have freedom of speech” generic, and only 22 percent perceived women to be included in the sentence “All men should vote.”Supporting the conclusion that the exclusion implicit in these terms contributes to a society where "man" is synonymous with "human," 53 percent of the Redditors agreed with the statement "Language can affect the way we think and our perception of things." Revealingly, a full 28 percent of men but only eight percent of women believed gender-neutral language was not important.

In addition, 24 percent of participants felt that the English language required a third, gender-neutral pronoun. Some people are already using pronouns like "they" and "ze" along with the gender-neutral honorific Mx., but these new words have yet to make their way into the mainstream lexicon.

There are many words, however, that have achieved mainstream usage and are totally acceptable alternatives to man, mankind, and other terms that sound suspiciously like they're just referring to men. The next time you're tempted to use a masculine generic, use one of these instead.

I love this word because, by calling people "individuals," we acknowledge that nobody fits perfectly within a category — not even "people."

2. "Family" Instead of "Brotherhood"

When John Lennon called on us to "imagine all the people" as "a brotherhood of man," he was contending with some serious logistical difficulties.

3. "Humanity" Instead of "Mankind"

Unless we want to send someone else to the moon to take another leap forward for the sake of womankind — but that would be pretty expensive.

4. "Firefighter" Instead of "Fireman"

This term is more descriptive than "fireman" anyway. That could just mean some creepy dude who sets everything on fire.

In addition to combating the classification of restaurant professionals by gender — because why should it matter? — this term leaves room for people who don't identify with either gender.

If we're going to be all-inclusive, why not include animals as well? For example, "All creatures have the right to be treated kindly" (but maybe not "All creatures should vote").

Unfortunately, even some gender-neutral terms still evoke the image of a man, like "philosopher" and "physicist." So, while changing our language is one step, we still need to actively challenge our assumptions — no matter what generics we're using.