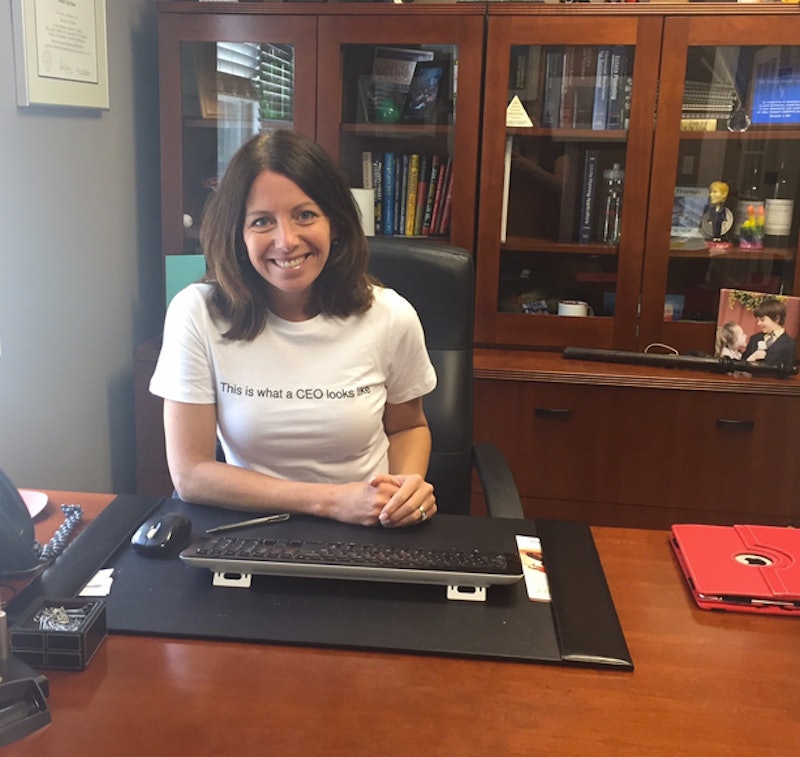 Have you ever had the frustrating experience of referencing "my doctor" or "the company's CEO" or "the director of the program" and having someone respond with a question starting, "Does he..."? The Tumblr Tumblr This Is What We Look Like and the corresponding hashtag #ThisIsWhatWeLookLike aim to dispel the assumptions behind these kinds of comments. If you hear "philosopher" or "anesthesiologist" — the professions of the site's founders — and picture a man, these women, who post selfies in "This is what a ___ looks like" shirts to Tumblr and social media, want to change that.

And if you don't think you're prone to these assumptions, try solving this riddle used by psychologists to measure implicit bias:

A father and son are in a horrible car crash that kills the dad. The son is rushed to the hospital; just as he’s about to go under the knife, the surgeon says, “I can’t operate — that boy is my son!” Explain.

If this story left you scratching your head, thinking, "Is the surgeon a ghost?" or "Does the son have two gay dads?" you're in the majority, even among self-described feminists. If you thought, "The surgeon is his mother," that's likely because I already revealed where I was going with this. But try this with your friends, and you'll be really surprised. It took me a while to get it the first time I heard it.

The This Is What We Look Like campaign wants us to know that the image above could contain future surgeons, especially since girls get discouraged from STEM fields at an early age.

Despite what we may see in ancient Greek and Roman statues, philosophers are not just old men stroking their beards.

The assumption that only men occupy the professions on these shirts, which are sold on This Is What We Look Like's Teespring site, has insidious effects on women. Fields like philosophy and computer science are often considered the territory of the "brilliant," and a recent study showed that the more "brilliance" a field supposedly requires, the less likely women are to enter it — not because they're not smart enough but because they don't believe they are. In just the third grade, girls have less confidence than boys in their math abilities despite no actual differences in performance.

The gender imbalance in executive roles is also a huge problem, with people associating leadership abilities with men and penalizing women who exhibit them. This punishment of "bossy" women also starts early, which Sheryl Sandberg's Ban Bossy campaign aims to rectify.

The shirts are likely inspired by (or at least reminiscent of) "This is what a feminist looks like" T-shirts, which aim to show that, contrary to stereotypes of feminists as man-hating lesbians with poor personal hygiene, anyone can be a feminist.

For other awesome feminist fashion news, check out buddingSTEM, the clothing line that two moms started for little girls who like "boy" things. Because what dinosaur enthusiasts, anesthesiologists, classicists, and CEOs all have in common is that they can be of any gender. Images: thisiswhatwelooklikecampaign/Instagram (6)

More like this
5 Ways To Stand In Solidarity With Women In America From The UK
By Sophie McEvoy
How To Fight For Reproductive Rights, Based On How Much Time You Have
By Courtney Young
Why You're Seeing Green Bandanas At Abortion Rights Protests
By Lexi Inks
The 3 Dating Apps Queer Women & Nonbinary Folks Actually Like
By Emma Carey
Get Even More From Bustle — Sign Up For The Newsletter