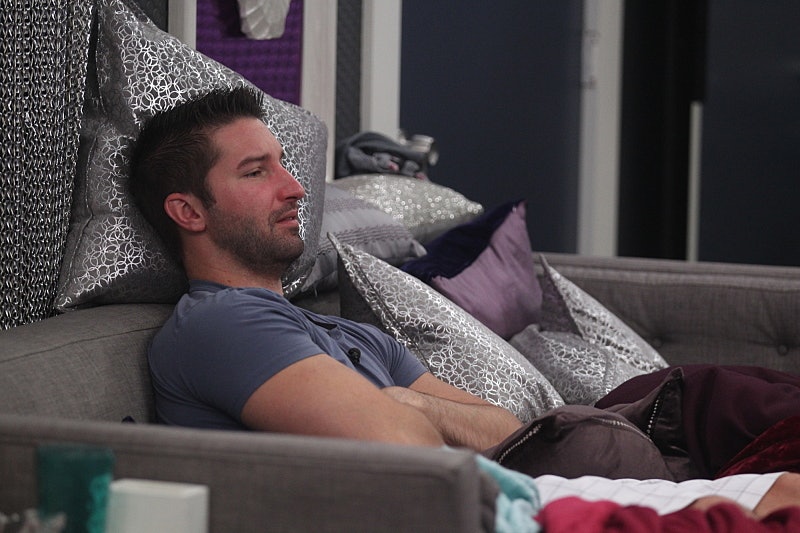 Unless you like your Big Brother houseguests completely aloof to how the game works, you probably rolled your eyes to the heavens on Sunday's show when Jeff didn't know that there were two HOHs in Big Brother . This is not the first time Jeff has said something that has made him the worst (in my eyes). Over the past few weeks that the houseguests have lived in the Big Brother house, Jeff has made some sexist comments regarding the women of the house.

At this point, CBS has yet to show any of the comments on television, which makes me wonder if fans who only watch the show on TV, and not on the live feeds, are really getting an accurate depiction of Jeff as a houseguest. A lot of people in the house, especially twins Liz and Julia, are really starting to get creeped out by him. Essentially, anyone watching the feeds is seeing a totally different Jeff than TV-only viewers. CBS has not responded to Bustle's request for comment on Jeff's remarks.

I understand that some things require extra airtime on the three weekly broadcasted episodes of Big Brother, and I understand that those things take priority. I'm talking about when the twin twist was figured out, competitions, ceremonies, and general game talk that will fill in viewers on people's alliances and strategies. Those things are very important to the broadcasted shows. I just hope that CBS also finds time in the next few days to let viewers see what Jeff has been doing in the house. It's clear that many people who have seen this behavior on the feeds are disturbed by it.

The houseguests have also discussed Jeff's comments among themselves, and it's clear some of the women are uncomfortable around him. Austin has told Liz that if Jeff makes her uncomfortable, she should tell him that he is harassing her. Meg has called out both Jeff and James for saying vile things about women.

Big Brother is supposed to be about being real, and not airing the very real things people are saying inside the house seems to contradict that. Plus, because the feeds exist, we all know what is being said anyway. This is why I'm still holding out hope that one of this week's episodes will put Jeff's behavior in the spotlight. Here are more examples of his revolting comments.

PLAY. WITH. HER. Are you serious, Jeff? You realize you're on a live feed 24/7 where people can hear these things, right? Actually, forget that these are things America can hear, and worry more about the comments themselves. They're disgusting, predatory, and completely out of line. I'm not the only one who thinks so, as Jeff's behavior was also discussed on Bustle's Big Brother podcast.

I have one thing to say when you're sitting in that chair on Thursday, Jeff, and Julie Chen is about to read the results of the eviction vote...