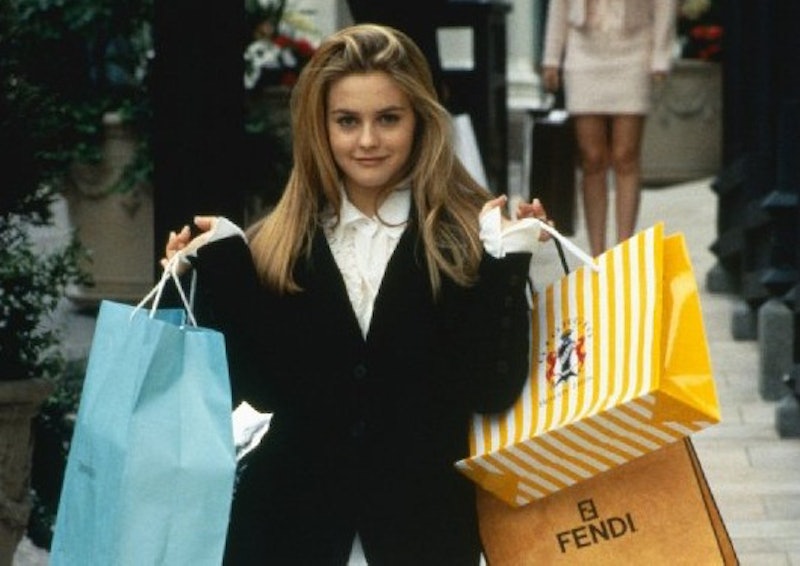 Cher Horowitz' colorful, designer-heavy wardrobe is as much a part of why millions of people have watched and loved Clueless for the past two decades. Sadly, most of the film's iconic costumes are missing after Alicia Silverstone gave away Cher's Clueless outfits. The 38-year-old actress revealed what happened to her stylish character's memorable outfits to Jen Chaney, author of the book As If!

“I didn’t do a very good job at saving any of them," Silverstone said. "I was stupid about that whole thing. I think I gave them all away." So, let's get this straight: Silverstone ended up keeping her costumes after the movie wrapped, but then parted ways with them later on. The knee-jerk reaction here, especially for Clueless fans, would be a collective "That was way harsh, Alicia!" How could the star of one of the most beloved films of its time decide to just give away her iconic costumes? Couldn't she have just donated the clothes to a film museum for a Clueless 20th anniversary fashion retrospective? Wasn't there a charitable organization who would have loved to auction off Cher's best outfits, from her plaid yellow suit, to the red Alaia dress, in order to raise funds for Pismo Beach disaster relief?

In all seriousness, only Silverstone knows why she gave away her Clueless costumes away. We can't blame her for wanting, at some point in the last 20 years, to move on from the movie and focus on other projects, not only in her acting career, but also as a mother and animal rights activist. Fans just wish that Silverstone knew how much the costumes mean to so many, and that she did not get rid of them so easily.