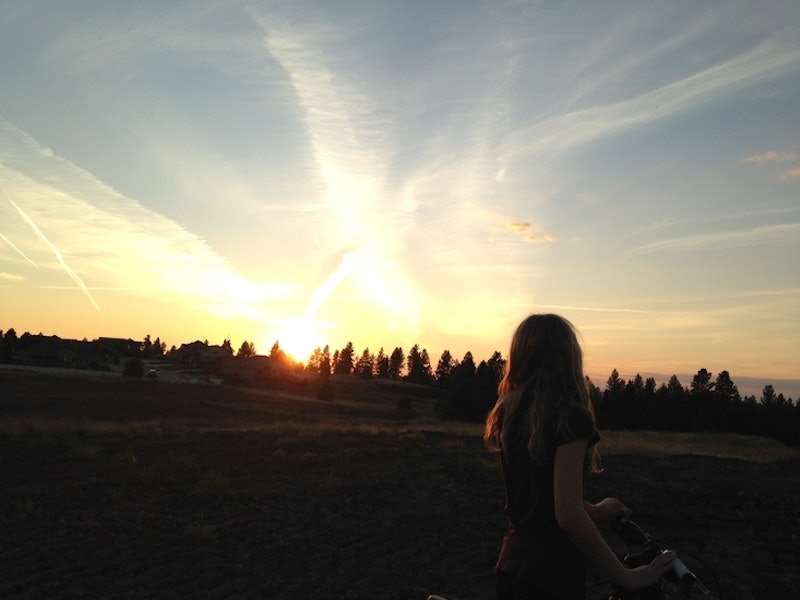 It doesn't matter if you take a day trip to your aunt's house a few states over, take a plane to the beach for a weekend, or if you have the funds and time to tour East Asia for a month — traveling by yourself is one of the most important things you'll ever do.

The first time I traveled by myself, I was 11 years old and I took a plane to my grandparents' house in upstate New York. My mom was a wreck and only agreed to let me go because my dad was certain that doing so would be really important for me. (He was right.) It was a genesis of sorts — not that I'm a world-traveler now, but that I am most proud of the ways I am independent. That part of me was born of all these little experiences, in which I had to assume full responsibility for myself in an unknown environment where really anything could happen. (Of course that wasn't the case on a half hour plane to my grandparents' house, I'm talking about in the greater scheme of it all.)

I've heard it time and time and again: countless people who claim it was traveling by themselves or moving to a new city that truly began to build their confidence in who they are. I've experienced it enough to also believe it to be true. Here, all the reasons you should consider traveling by yourself at least once while you're in your 20s.

You teach yourself what you didn't know you were capable of. You set out to accomplish something and by the end you are the one who saw yourself through. You had an amazing experience and it was because you had the courage to pursue it. It builds confidence in a way that you simply can't attain just cycling through the rote tasks of everyday life.(That facilitates a different kind of confidence, of course, but that's not the point.)

It's A Way To Liberate Yourself

You See Parts Of The World You Wouldn't Have Known Existed

It's the town you drive through in between the airport and your hotel. The wrong turn you took that led you through a random neighborhood that you never would have discovered in the first place. It's the places you didn't plan to go that tend to matter more than the ones you did.

You Learn How Other People Live

You assimilate to the culture, even if just a little, and you realize that so many elements of lifestyle you assumed to be inevitable certainly are not. It was the little bit of the world you were aware enough to consume, and it opens your mind to the knowing that there are other ways, different routes, qualities of life you knew you wanted but didn't know were possible. (They are.)

You Have To Assume Full Responsibility For Yourself

For getting yourself from point A to point B, for your budget, for the mess you didn't clean up and got charged for, and for every little thing that you didn't realize other people were picking up for and directing you toward.

It Develops Your Self Awareness

You have to be conscious of what you need and when, what makes you comfortable and not, and you have to learn to listen to your instincts — above all else.

It Develops Your Awareness For What's Happening Around You

It's not even just a matter of sensing potential danger, but also simply knowing where you are, being able to place yourself, letting your sixth senses kick in and tell you where center city is, how far you are from base, whether or not someone is actually following you or you're being paranoid, and where to go/what to do/who to tap on the shoulder and ask for help if that's ever the case. (Sounds crazy, but is actually, sadly realistic in the world.)

It Makes Everything Else Seem A Little Easier

If you can navigate your way across a country with little more than a bag to your name, tax season and high school friend drama and the overall uncertainty of daily life seems just a little more palatable.

You Expand Every Part Of Your World

You learn what you need to keep yourself sane during a 9+ hour flight. What you like and don't, what your instincts sound like when they're alarming you and not. You learn how other people live. You learn about little towns and neighborhoods you wouldn't have otherwise known existed. You learn that normal is a subjective, and that there are more faces and places and moments and lives on Earth than you can even fathom in your little, tiny bubble.