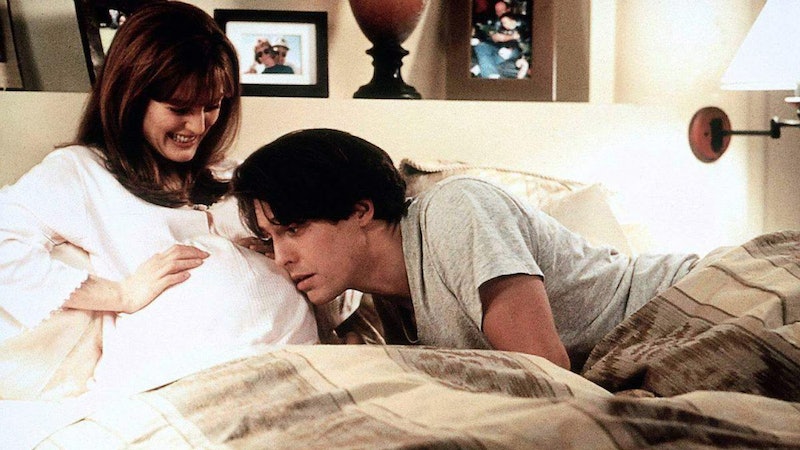 Hugh Grant has made a lucrative career out of being the most charming, fumbling, and British man in the room. The mid-to-late '90s were peak Hugh Grant times. He was all over Hollywood, wooing leading ladies, spilling lemonade, and being terrible at that whole commitment thing, but being delightful enough to be forgiven for it. Nine Months, the story of how two very different people in love cope with an unexpected pregnancy, was released 20 years ago — and it is everything you could ever want from a Hugh Grant rom com. Julianne Moore co-stars as Rebecca, a woman smart enough to see through Samuel's (Grant) nonsense and brave enough to go it alone when he freaks out about becoming a father.

Unlike most man-child comedies, Nine Months isn't about a shrill baby and/or marriage-crazy woman who traps a once cool dude. Instead, it's Grant who is painted as the foe — Julianne Moore is, as always, perfection onscreen and anyone who would walk away from her is an outright madman. I always appreciated that in the end, it's not about man vs. woman or responsibility vs. freedom, it's really about two people coming together for something bigger than themselves. It's a simple story with great performances and a script that's just sweet enough without being too saccharine.

Who let this happen?

A movie with this good of a cast should not have been such a chore to get through.

GTFO with that accent, Anne Hathaway.

This felt more of a parody of a movie than an actual movie.

Scary, but in no way lived up to the original.

Look, I know this movie is garbage, but I'm a real sucker for Josh Hartnett cheese fests.

Julie Delpy can do no wrong in my book.

This movie is ridiculous, but it's certainly entertaining.

How to catch every Rom Com trope in 10 seconds or less! It's a total cliché of a movie, but you better believe I will curl up to it with my pink wine.

This scene destroys me every single time. Aside from the aching pain of love, it's got a young Chloë Grace Moretz stealing the whole thing and one of my all-time favorite lines from a movie, "Robin is better than the girl of my dreams. She's real."

Thankfully you only have to endure 94 minutes of the agony.

EVERYONE SHUT UP SANDRA BULLOCK IS SPEAKING.

So much '90s perfection happening in all of this.

The golden era of Brad Pitt.

Jane Fonda, Lily Tomlin, and Dolly Parton are all national treasures...as is this movie.

ZOMBIES AREN'T SUPPOSED TO BE THIS FAST. This was a truly ground-breaking horror film that changed an entire genre. Cillian Murphy's performance was electric.

Quite simply one of the most important films ever made.