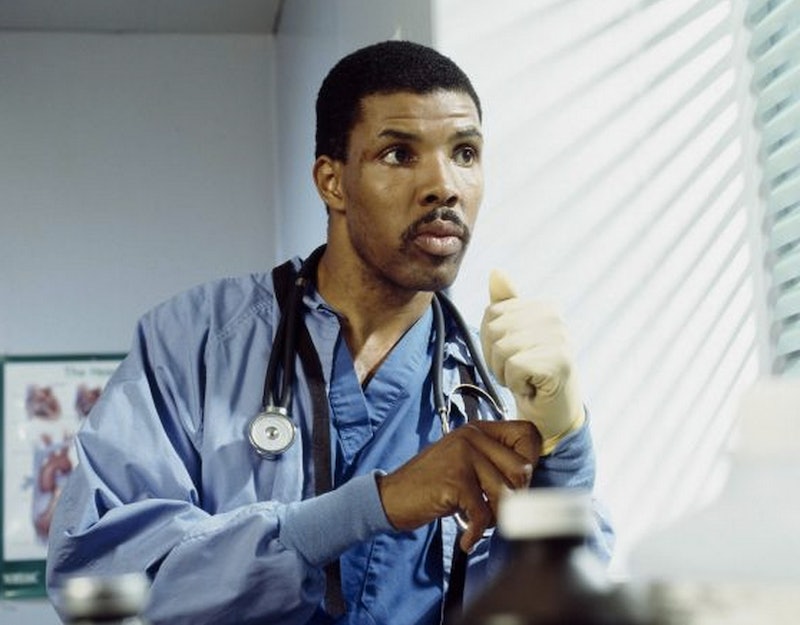 They just don't make 'em like they used to. Long before Dr. Bailey was the tough-as-nails attendant on duty scaring the young, beautiful interns on Grey's Anatomy to get in line there was one Dr. Peter Benton — the stern attendant barking after the young Dr. John Carter (Noah Wyle) — no relation to Taylor Kitsch's would-be blockbuster hero of the same name. NBC's ER is the gold standard of hospitals shows and in my humble opinion Dr. Benton was the best character in its history. He was a lead for the first eight seasons, and it's no coincidence that I had trouble getting through seasons nine through fifteen without him. George Clooney gets lots of credit for playing bad boy Doug Ross (yes, he was super young and super hot) and everyone knows this show launched The Good Wife's Julianna Margulies career as Nurse Carol Hathaway, but both characters pale in comparison to Eriq La Salle's Peter Benton.

A big part of what made him so great is he never fit into any character boxes. Sure, he was an arrogant surgeon but he was also open and vulnerable. He was hyper competitive about his career, but still had a very active (and committed) love life. He was also one half of the best bromances on TV (move over JD and Turk), and yes I am talking about his friendship with Dr. Carter. (Just know that referring to Dr. Carter as many times as I can is going to be a theme here.)

So even though the show's finale is behind us and there are no new episodes featuring my favorite doctor, this list is basically an ode to Dr. Benton, a man I call "the original McDreamy."

Pilot episode, don't care. He was killing it from Day 1. Fun fact: this move was totally improvised by La Salle, who clearly knew what was up.

He Was Kind Of A Ladies' Man

Before she was River Song (or Mama Lance on Arrow) Alex Kingston was very busy being wooed by Benton, and then later Dr. Green. Say one thing for Dr. Benton: he had good taste in women.

Like, really good taste. Elizabeth, Cleo, Jeanie... this dude got some action with some awesome women on the show. I mean, can you blame them? Or him?

He Was Super Hot

I feel like this is a given, but still needs to be said. Because yum.

He Was An Awesome Single Parent (Aww)

You guys, his family saga is bananas. His ex-girlfriend gets pregnant, the baby is born prematurely, then the little guy turns out to be deaf. Later, Benton's baby mama dies (!) and her husband sues Benton for custody. In the battle it turns out he is not the father, but he perjures himself on the stand to get custody of him anyway. Benton ends up quitting Cooks County to work at a clinic with less hours so he can be with his son. Whew. (Also, swoon.)

He Was A Mentor

Obviously, he was the closest with Carter, and together they made the best medical team on the planet. But just because he helped the little interns grow, doesn't mean he ever lost his edge.

He Was A Hardass

Always the tough guy! Seriously, he was grouchy and arrogant and rarely satisfied, but he was always looking out for the patient. Swoon.

He Tugged At Our Heartstrings

Everything about Lucy and Carter getting stabbed was tragic, but nothing was more bittersweet then Benson fighting to save them. He was so protective of Carter and I am getting teary just thinking about this.

Also I Still Miss Him

Feel free to star in the remake or reunion show any time, Mr. La Salle.