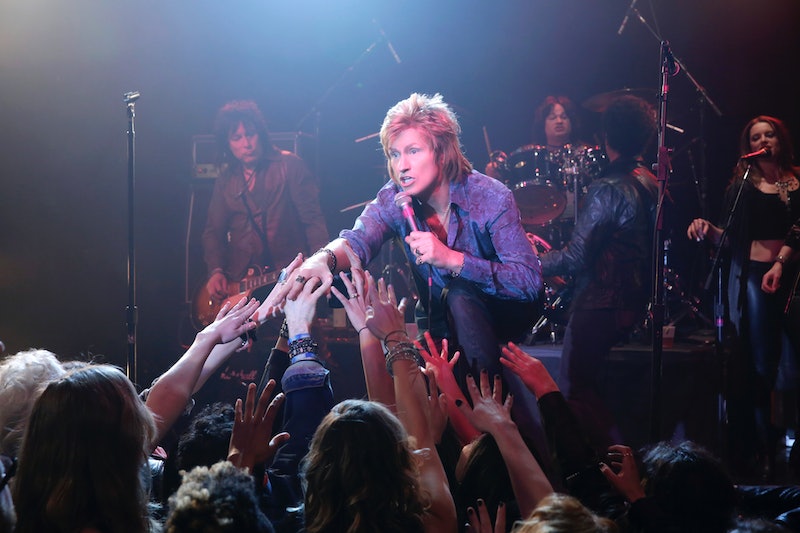 When you name your show Sex&Drugs&Rock&Roll, you're making a lot of promises. You can't wimp out with a title like that. But Denis Leary is up for the challenge. So how does he plan on delivering all of the salacious stuff the title suggests? And, since it sounds too fantastic to be true, is Sex&Drugs&Rock&Roll based on a true story?In the show, Leary plays Johnny Rock, a singer, songwriter, and one-time leader of the band The Heathens in the 1990s. The band released an album and broke up immediately, with bad blood between Johnny and the other members, like guitarist Flash. Years later, Johnny sees a second chance for the band when his daughter from a one-night stand shows up with muscular singing chops and wants to reunite The Heathens — with her as the lead singer.

You never know for sure with rock and roll whether stories like this are real — stranger things have happened. But The Heathens are fictional, and Leary didn't get his inspiration from any tell-all rock biographies or anything. Still, the show does have some roots that extend into the real music world. It's just not what you might expect. Here are some of the show's real-life inspirations:

1. The Title Comes From A Real Song

The show's name, horrible punctuation and all, comes from this Ian Dury song. (It was also the name of Dury's biopic.) Dury, being a polio-afflicted Englishman performing in the '70s, doesn't really bear any resemblance to Johnny Rock, but the themes are there in the song.

2. Leary Drew On Plenty Of Real-Life Musicians For Inspiration

"[Johnny Rock and Flash are] like the Steven Tyler and Joe Perry of Nineties CBGB's bands," Leary told Rolling Stone. "John's character has a little bit of Richie Sambora in him as well — when it's time for a solo, he's the star of the show, y'know? I like the dysfunctional-family dynamic of a band, and those guys are the f****ed-up, bickering parents that keep everyone together. It's the Mick and Keith thing." So it's basically a blend of every big rock personality out there. Let's take bets now one which one will say, "I am a golden god" before jumping into a pool.

Keep an eye out for Greg Dulli, Dave Grohl, and Joan Jett. Apparently, their performances in the show may be too good. "The thing that’s galling thing about Greg Dulli and Dave Grohl is that they’re great songwriters, they’re great performers. They’re big rock stars. But, they’re also great actors," Leary told The Wrap. "Like, we did a lot of improvisation with those guys and they were great. I can’t be a rock star in real life. Those guys are rock stars and they can f***ing act, which is kind of sucky. It’s not fair.” Well, Leary did have that one song. Which reminds me...

4. Leary Did Have a Hit Single

Anyone remember "A**hole?" True story: For a while I thought that Cake was really Dennis Leary because of how similar I thought the vocals are in "A**hole" and "Rock 'n' Roll Lifestyle." That Cake song wouldn't be a bad theme to Sex&Drugs&Rock&Roll...

5. And He Wrote The Sex&Drugs&Rock&Roll Songs

Leary is largely responsible for the show's soundtrack. "Leary wrote two [songs] by himself (including the fist-pumping title track) and tapped Chris Phillips — who helped write his seminal '90s hit 'A**hole' — on two others," Billboard reports. "And, the show brought some real-life rockers into the mix: Both Foo Fighters' Dave Grohl and Afghan Whigs' Greg Dulli pop up in the pilot, with the latter contributing vocals and guitar to the theme song." So, it's a show that does take the music part of things seriously, at least, if in a twisted, Denis Leary sort of way.

It kind of comes with the Nickelodeon territory. I mean, is there anyone from Victorious that hasn't tried to have a singing career? If you go to her YouTube channel, though, you can see her performing songs that are less Nick-like, such as "Wild Horses" by the Rolling Stones, or "Oh Darling" by the Beatles. That music is a little more in line with the aging-rock vibe of Sex&Drugs&Rock&Roll, which is presumably what she'll be doing playing Johnny Rock's daughter. Unless she plans on taking The Heathens in more of a tween direction, which doesn't seem likely. Either way, should make for an interesting show.

More like this
ITV's 'Maternal' Was Inspired By A Very Simple – & Unanswerable – Question
By Maxine Harrison
Cruz Beckham Teased New Music With An Adorable Nod To Mom Victoria Beckham
By Stephanie Topacio Long
Zach Gilford Admits He Forgot Taylor Swift's Name When He Starred In Her Music Video
By Jake Viswanath
Britney Spears Shares & Deletes Photos Of Justin Timberlake From 22 Years Ago
By Jake Viswanath
Get Even More From Bustle — Sign Up For The Newsletter
From hair trends to relationship advice, our daily newsletter has everything you need to sound like a person who’s on TikTok, even if you aren’t.