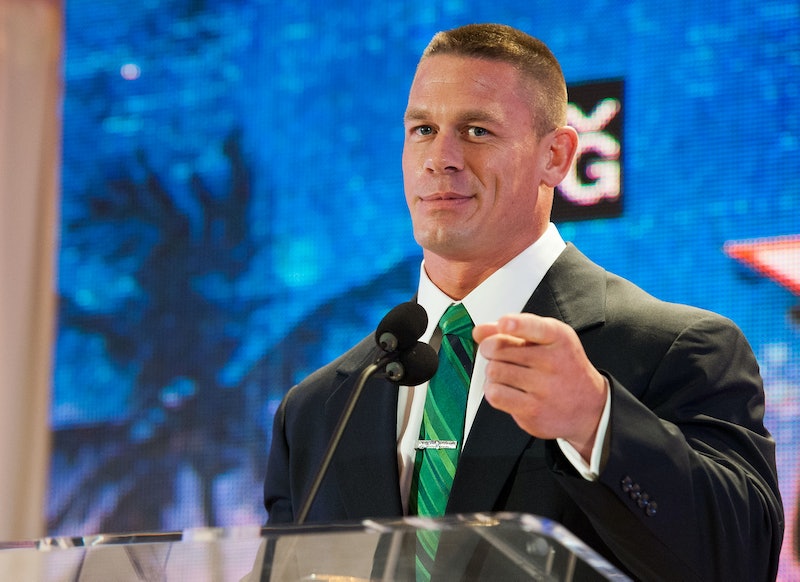 In the lead up to Friday, when I will for sure be sitting in a theater watching Amy Schumer’s first feature length film, Trainwreck, one thing that I’ve been doing to bide my time is to watch any teaser or clip I can get my hands on. It’s either that or camp out outside the theater doors for the next three nights. So, I’ve been watching clips on repeat. And the clip that I love the most? The one where John Cena tells off a fellow theater goer who calls him Mark Walhberg (see below for video). Mainly because I recently found that Amy Schumer, who penned the script for Trainwreck, didn’t even write most of John Cena’s lines. Turns out the WWE wrestler and funny man John Cena ad-libbed his Trainwreck lines. Not all of them. of course, but most of them. So, if this guy is that talented, where can I get me some more?

The good news is that John Cena has acted before, and he will act again. HUZZAH! And you don’t have to sit ringside at the next WWE battle to see it. Not that that would be a terrible thing. Cena has a pretty impressive career outside of bodyslamming big men, and pinning them to the floor (even though that totally sounds like a fun Friday night to me). The WWE wrestler has starred in multiple films, including The Marine, 12 Rounds, Legendary, and The Reunion, and he has guest-starred on Psych and Parks and Recreation.

The big news, though, is what John Cena is doing in the future. Because that is something to seriously get excited about. The actor has just finished up filming the new Amy Poehler and Tina Fey movie. WHAT? YES. That’s right. Amy Poehler and Tina Fey are coming back to the big screen in Sisters, a film about two sisters who throw one last house party before their parents sell their family home — and Cena is going to be in it. That news seriously makes me so excited I wanted to scream a little.

The film also stars a slew of SNL alumni, including Maya Rudolph, Kate McKinnon, Rachel Dratch, and Bobby Moynihan. Throw John Cena’s muscles, and amazing talent for winging it, into that comedy melting pot and only good things can come from that.

So keep an eye on this guy, friends. He’s going to be one to watch. Not that you could look away, even if you wanted to. Not with those guns blazing.

More like this
Alyson Stoner Says She Went To Rehab After Auditioning For 'The Hunger Games'
By Jake Viswanath
15 Romantic Movies On Netflix That Are Perfect For Snuggling Up On The Couch
By Rachel Simon and Grace Wehniainen
'Elvis,' 'Walk The Line' & 10 Other Movies Where The Actors Actually Sing
By Radhika Menon
What’s New On Netflix: The Return Of 'The Umbrella Academy'
By Arya Roshanian
Get Even More From Bustle — Sign Up For The Newsletter