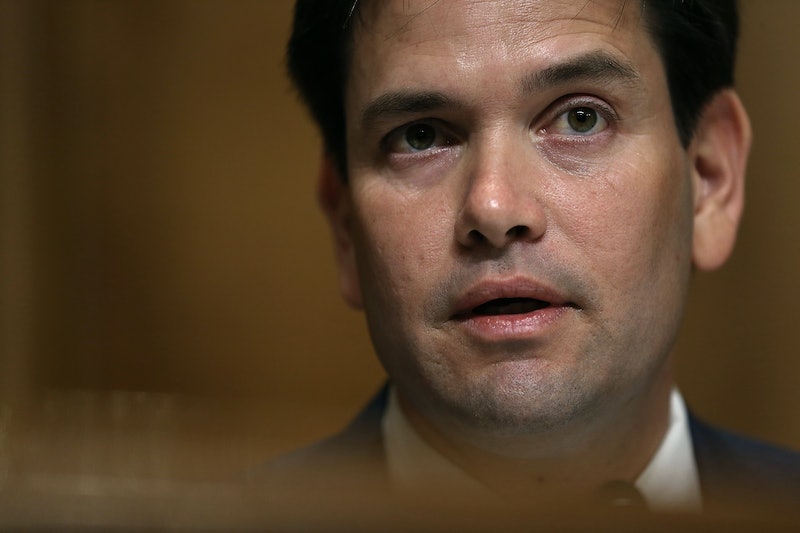 Prior to Tuesday's landmark Iran announcement, President Obama reportedly made calls to the respective heads of each Congressional party, hoping to curtail any surprise ambushes on those who might object. But while Democrats on the Hill largely supported the move — with Bernie Sanders tweeting his approval and Hillary Clinton calling the deal important for relations in a closed-door meeting — Republicans balked. All in all, the GOP reaction to Obama's newly-minted Iran nuclear deal was anything but friendly. But that's definitely no surprise.

"I have said from the beginning of this process that I would not support a deal with Iran that allows the mullahs to retain the ability to develop nuclear weapons, threaten Israel, and continue their regional expansionism and support for terrorism," said Florida Sen. Marco Rubio in a statement on Tuesday. "Based on what we know thus far, I believe that this deal undermines our national security."

Rubio added that he believed Obama had "consistently negotiated from a position of weakness" and that the administration had shown its hand too many times.

"I expect that a significant majority in Congress will share my skepticism of this agreement and vote it down," said Rubio, calling on the next president to effectively wipe the slate clean once again and trash the deal. "It will ... be left to the next President to return us to a position of American strength and re-impose sanctions on this despicable regime ..."

Rubio's GOP counterparts were equally displeased. "Iran's Supreme Leader should know that a future American president will not be bound by this diplomatic retreat," said Wisconsin Governor Scott Walker in a statement on Tuesday morning. "Undoing the damage caused by this deal won’t be easy [but] when the United States leads, and has a President who isn’t eager to embrace Iran, the world will follow."

Walker, who officially announced his 2016 presidential bid on Monday, elaborated on his own Presidential course of action during a recent interview with Fox News host Sean Hannity, explaining:

As president, on my very first day going forward, I would pull back, I would terminate that bad deal with Iran completely on day one. I would then put in place crippling economic sanctions against Iran, and I’d convince our allies to do the same. This is not a country we should be doing business with.

With the GOP field growing wider by the week, Obama has offered up a veritable feast for conservatives looking for a few fresh talking points during the 2016 Primary Debates. And with topics like gay marriage and abortion rights beginning to sound wearily repetitive, a change of conversation like the president's Iranian diplomacy measures will no doubt provide more than enough material to argue over.

As it currently stands, Iran should prove to be a meaty debate topic: a February survey by Gallup showed that only 11 percent of Americans had a positive view of the Middle Eastern nation, while eight of every ten citizens said they viewed the country unfavorably. Compared to other talking points that are harder to unpack in so little time (*ahem*, healthcare), Iran is an automatic win.

When you think of it that way, it makes sense then that the GOP has absolutely pounced on the opportunity to go after Obama's Iran decision. And man, are they not holding back one bit.

"This is the most dangerous, irresponsible step I've ever seen in the history of watching the Mideast," said South Carolina Senator (and 2016 hopeful) Lindsey Graham in a visit to MSNBC's Morning Joe on Tuesday. "You've ensured that the Arabs will go nuclear ... put Israel in the worst possible box [and it] will be a death over time sentence to Israel if they don't push back," added Lindsey, directing his commentary to the president.

Yep, it seems that after months of tense negotiations and broad pushback from the Right — and with the ink hardly dried yet — the internal battle over the Iranian nuclear deal is far from over. In some ways, it's just begun.