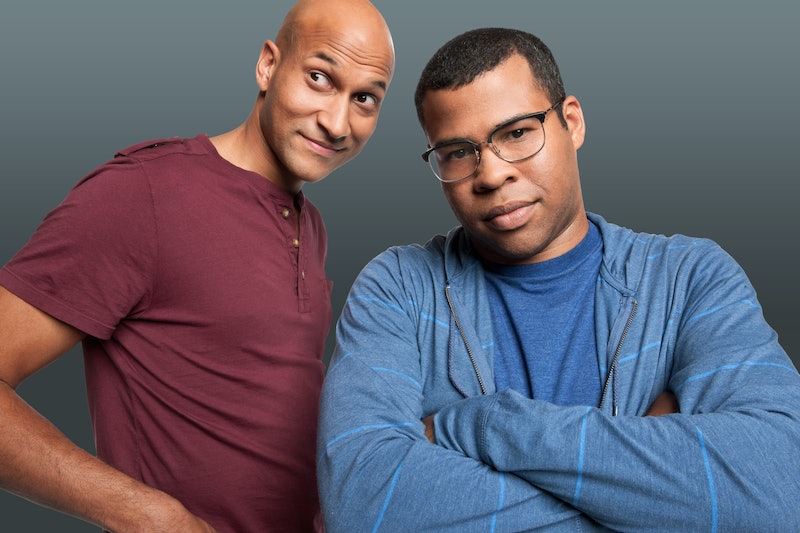 Keegan Michael Key and Jordan Peele are supporting women on their show lately. On the Key & Peele Season 5 premiere, the comedians sang a "Pirate's Song" all about respecting women, and in Episode 2 they continued their feminism streak in the sketch "Menstruation Orientation," which followed the guys as motivational speakers who teach men how to act around their women when they are going through menstruation. While some of the sketch was a tad stereotypical, overall the sketch and the conversation that led up to it took strides to showed how men should act with their women.

Before the sketch began, Key and Peele had a conversation about sexism and understanding women. Peele began by asking Key, "Do you think you're a sexist?" Key responded totally honestly, "Much to my chagrin, I think I am." The comedians began talking about how they speak with their women and their relationships, and Peele stated that he was a sexist too. He was a sexist against men because of how they talk to women. The whole set up was absolutely perfect for the sketch to come but I can't help but think that both of the comedians could have gone a little further in their message and comedy.

The sketch was all about the two men as strange characters dressed in the craziest suits talking to rather reluctant men about what women go through when they are menstruating. Key and Peele go through excruciating detail about how uncomfortable and terrible menstruation can be, at one point they even try to compare what menstruation would be like for a man. "Imagine if you had locusts flying out of your d**k every month," Key's character says. And the best part is they're not wrong. Menstruation freaking sucks and Key and Peele really highlight that we're strong for enduring it.

They're main message of the sketch boiled down to one line, "Be nice to your bitches when they’re bleeding." And I know what you're thinking, didn't their sketch from last week talk about not calling women degrading words like "bitch" and "hoe"? Well, the men stand by that statement as they clarified their earlier sentiments. "Don’t call her a bitch, but get your bitch some chocolate!" Key & Peele are right. Chocolate is king and Key and Peele are brilliant in every way.