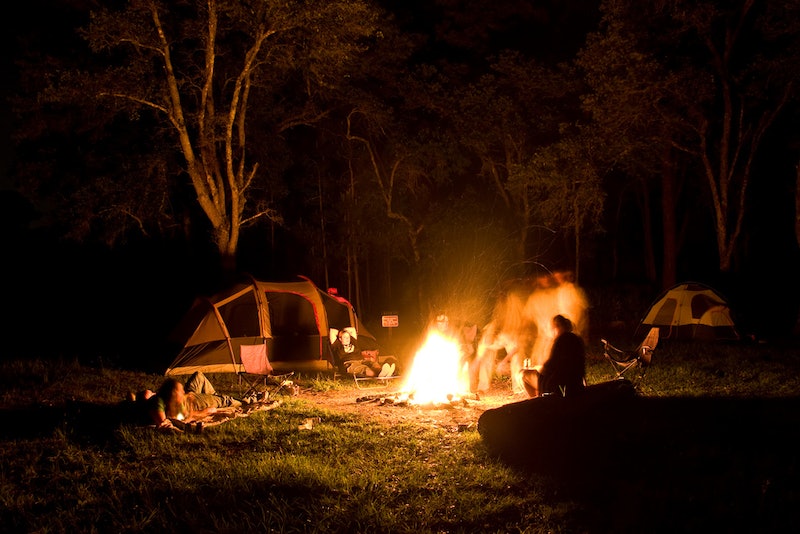 Confession: I have never been camping. And to be honest, after these staying up way to late reading these creepy camping stories from Reddit, I'm not sure I ever want to. Ever. Just sayin'.

“Tell us your best true spooky story” threads are particularly common on AskReddit during the Halloween season — but that doesn't mean they don't pop up at other times of the year, as well. Case in point: Yesterday's summer-themed edition of this popular topic, posted by Redditor GrayDust. Like the best AskReddit threads, this one started with a simple question that leaves the door wide open for any story that might fit under its umbrella: “Campers of Reddit, what is the most paranormal event that has happened to you while you were camping?” GrayDust wisely marked the thread “serious,” as well, ensuring that no Loch Ness Monsters would be appearing asking for the requisite $3.50.

And you guys? The stories are pretty freaky. Not all of them remain unexplained, but many of them do — and they're all the more effective because of it.

I suspect that a lot of the creepy things that happens during camping trips scare us mostly because the wilderness is kind of the ultimate Great Unknown. You're away from civilization; there's no telling what else might be out there with you; and let's face it: There's nothing quite like being alone in the woods (or in the desert, or wherever) to drive home exactly how small you are in the grand scheme of things.

But sometimes, it's good to remind yourself that the world is bigger than you are — even if those reminders come in the form of terrifying encounters with unexplained creatures in the great outdoors. Here are 15 of my favorite stories; head on over to AskReddit for more. Who's got the s'mores?

In my head, this is a sci-fi/horror/thriller story in which each of Annihilating_Tomato's friends were hacked by some mysterious shadow organization called “The Collective,” with the end game being world domination. But maybe that's just me.

At least this one has positive connotations, right? The world may be scary, but it can also be wondrous.

No, not that The Silence... Or maybe it was, and these poor campers just don't remember. One thing's for sure: The moment all wildlife ceases making noise… you'd better start paying attention.

Because storm giants is obviously the only explanation for this one.

Possible explanations brought up by other commenters include sleep walking and cckaufmann's brother moving him or her for the lulz. Regardless, though, “To this day I have no idea how I ended up in the middle of the woods still in my sleeping bag” is one of the most frightening sentences I have ever read.

6. They're Playing My Song

To be fair, I would have freaked out, too. Waking up in the middle of the wilderness to find that every single person you went out there with is gone? No thanks.

8. The Scream in the Night

Banshees. It's got to be banshees. Except that it was probably a fox or something, but still. Banshees, I tell you.

Alternatively, one might call the movie based on this event The Ghost in the Boathouse… but I think Footsteps is much more ominous. The full story is a little lengthy, so this is just an excerpt; head on over to the permalink to see what happened next.

I'm not sure which explanation is more terrifying: Ghost girl crying… or real girl crying.

They may have looked like wild boars… but personally, I think davidgclarkjr definitely found bigfoot. A whole herd of bigfoots (bigfeet?), even.

Oof. This could have gone very, very badly. But hey, it's good to know that the Sword of the Morning knows what's up:

These kinds of happenings are fairly common, although I'm not at all sure why. Is it truly supernatural, or maybe just our subconscious at work? The jury's still out.

My first thought? Earthquake. Brians89 swears no earthquakes or aftershocks happened during that period, though; s/he also says that that part of Malaysia doesn't have a history of earthquakes. Do with that what you will.

There's probably a perfectly reasonable explanation for this one, but, well… maybe you should just read the rest of the story here.