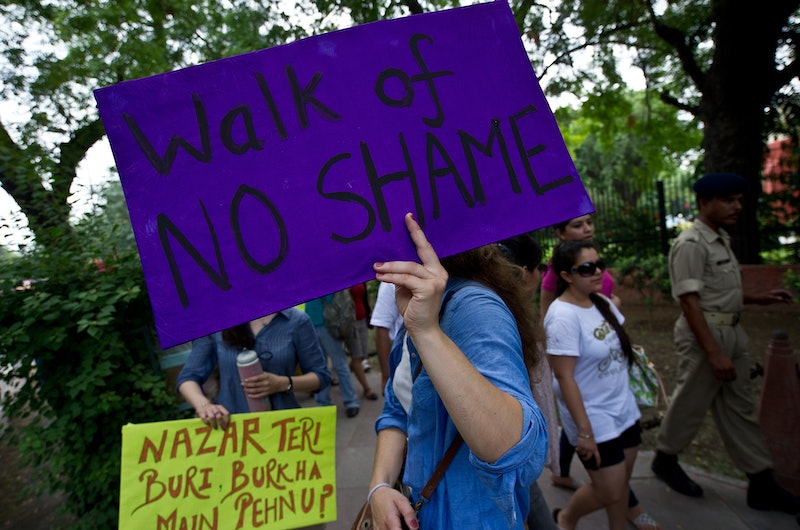 Public sex is admittedly illegal in Calgary, where the encounter took place, but you know what is just as illegal in Canada? Posting "intimate images" online without the subject's (or subjects', in this case) consent, thanks to the Protecting Canadians from Online Crime Act. Plus, it's just a shitty thing to do.

Rather than ignoring the trolls or, god forbid, taking their slut-shaming to heart, Frulling decided to take them on. "I don't see why I should get bashed for it when the guys don't get bashed for it," she told Vice in an interview. If you need rest a little after the epic fistpump you involuntarily performed after reading that sentence, you may do so now.

Frulling recorded a video ingeniously entitled "Trampede (The Original)" discussing the experience. "Some people have asked me if I regret it, and what I can tell you is that I don't," she shrugs. Later, she instructs the haters to "keep hatin'" and happily munches on a cucumber.

Can I get a praise hands emoji? I think I'm in love. (Alexis Frulling: call me.)

Some women, however, are doing their best to change that. Like Frulling, Danish activist Emma Holten chose to fight back after images of her body were posted online without her consent. Unlike Frulling, Holten was just 17 when they were taken. Six years later, the photos were still available online despite repeated attempts to have them removed. In response, Holten chose to reclaim her body through a series of powerful nude photographs. "It's still my name and it's still my body," she told One Woman Army in 2014. Despite international attention, Holten's original nude photographs are still available on revenge porn websites.

On the other hand, she's clearly got the hang of how to deal with it. "I can't say I'm really proud about it, but I'm not really ashamed," she chuckles in the video. Somehow, I get the feeling that she'll land on her feet.