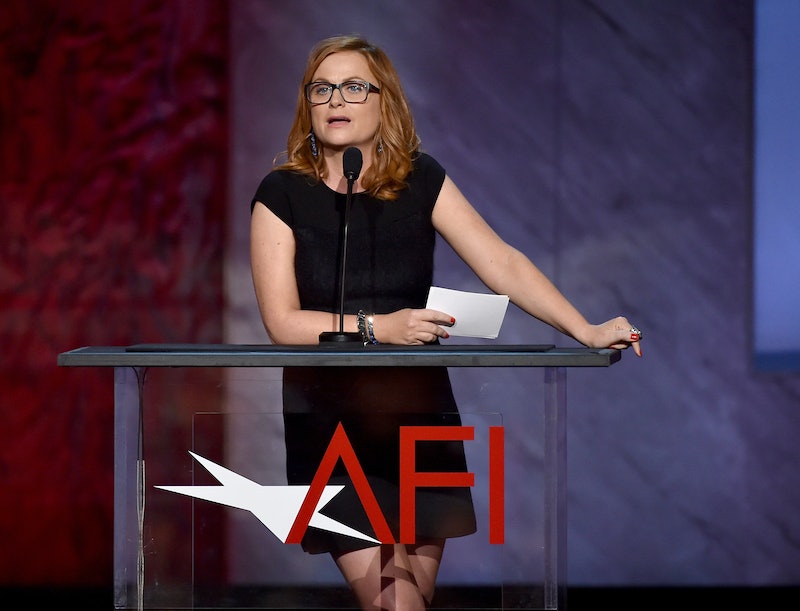 This will probably come as no surprise to anyone, but Amy Poehler is nominated for an Emmy at the 2015 ceremony, because Leslie Knope and Parks and Recreation might be gone from our television screens, but they are not gone from our hearts. While celebrities have been responding to the Emmy nominations all morning, since they got the benefit of not being asleep when the list was made public, no one's reaction was as perfect, as poignant, and as absolutely freakin' hilarious as that of the 43 year old actress. In fact, Poehler's Emmys reaction should live on in infamy, and we should give her her Emmy from now just for winning the Internet.

According to New York Times reporter Dave Itzkoff's Twitter, he asked Poehler for a quote regarding her nomination, and her NSFW answer is just everything, you guys. Poehler is currently in London promoting her latest film, Inside Out, in which she plays Joy, and I'm sure that, were Inside Out not a Pixar movie for children, Joy would respond to such a nomination in the exact same way that Poehler did. Because, sometimes, it's not just Leslie Knope that is the living embodiment of Poehler's Inside Out character; Poehler herself has quite a fair bit of exuberant Joy at the helm of her own team of emotions.

Incidentally, Poehler's response is also the exact same response that just about everyone had when they heard that she was nominated, because this has been a long time in coming, and this is also incredibly well deserved. So, if anyone asks you how you, or the 43-year-old herself, feels about Poehler being nominated for an Emmy for bringing so much joy into our lives via the indefatiguable Leslie Knope, then you can tell them, with great passion and exuberance, "F*** YEAH!!"