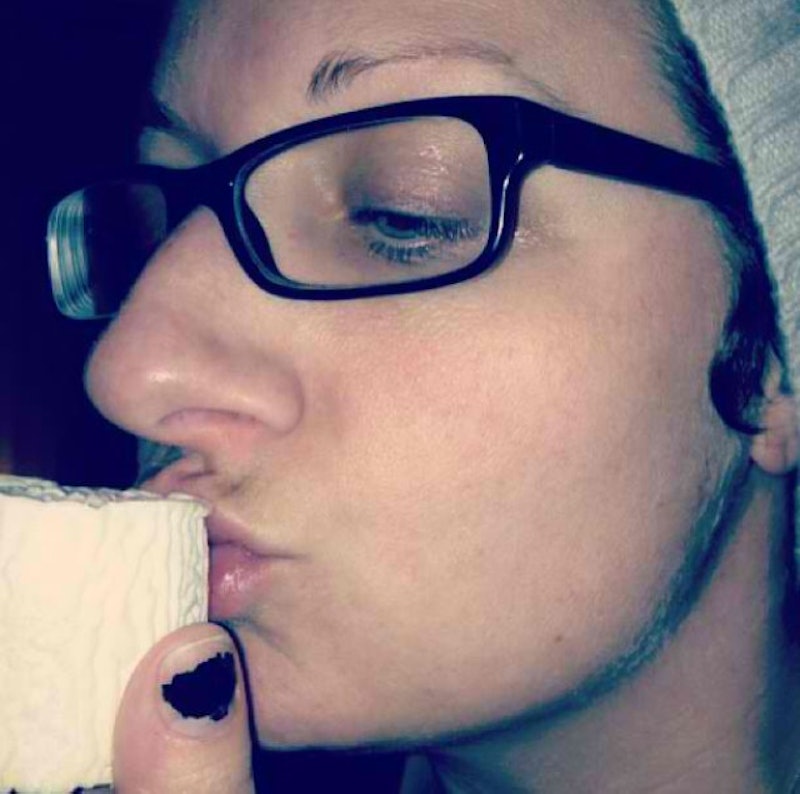 I’ve gained weight and I’m affectionately calling this my “Bridget Jones” phase. I announce it to everyone I see these days. If I haven’t seen someone in a several months, I immediately beat them to the punch and gleefully ask them if I remind them of anyone. No? Are you sure? I’m Bridget Jones! I recognize that it’s completely absurd, and probably makes the other person feel moderately awkward, but the need to put it out there first is so strong that I really have zero control over the words as they fall out of my mouth. I apologize for the gain and I apologize for talking about it, the whole time knowing the truly polite thing to do would be to just leave it alone.

I think I want everyone to know that I’m completely aware of my obvious weight gain. However, unlike Renee Zellweger, this isn't for a role. I’ve gained weight, according to my doctor, because of love. I guess that’s a far better reason for it than, “Well, you’ve let your addiction to Lombardi’s Pizza get totally out of control, Chatel.” Seriously; their pizza is deadly and just a few blocks from my place.

So how exactly did I collect all this love weight? Well, it didn't help that I fell in love in Paris and spent the beginning of my relationship in bed eating croissants and baguettes and drinking wine in between romps with my now fiancé, Olivier, a French man who eats as I do, but still remains rail-thin. I had gone to Paris with a broken heart and an empty stomach, and within in a couple of months not only was my appetite back, but with a fury. I had come out of a relationship in which my body was consistently criticized, and found myself in a new relationship where my body was not only praised for its curves, but constantly fed.

At first it didn't bother me. I had a glow in my cheeks, and I'd finally remembered how to laugh. But when I returned to New York City and just kept on eating as if every meal was my last, it got out of control. My jeans went from being snug to stopping mid-thigh with zero intention of going up any further. I blame Olivier, both jokingly and seriously. His response is always something positive followed by asking me what chocolates he should bring me from France when he comes to visit. Le sigh.

When I first approached my doctor about my weight gain, I suggested a gland issue. I had heard about these elusive issues that could make people gain or drop weight quickly. I had always hoped that should I end up with any gland situation, it would be the kind that causes double cheeseburgers to drop from my hips 30 minutes after consumption. No such luck. The doctor asked me if I had any major changes in my life. I explained what was new and what was the same and, based on his prior knowledge of my health, both mental and otherwise, he said I was "just happy." He said this was like the weight that a lot of couples take on after they’re comfortably married for a couple years. However, I just got a head start on it. How nice for me.

It’s in my most miserable moments that I lose weight. I not only can’t eat or just don’t eat, but when I do manage to make the effort, I can’t keep it in me. It’s as if whatever misery or heartache that’s plaguing me takes hold of my innards and forces my body to reject anything I put into it. While some people find themselves making love to pints of Ben & Jerry’s when they feel like their world is falling apart, I’m on the other end of the spectrum. I’m either pushing food around my plate trying to take bites, or have my head in the toilet. It’s not pretty. But because this is the case when I’m sad, the case when I’m happy is — voila! — extra poundage!

I have been trying to lose the 25 or so pounds that I’ve gained, but it’s not as easy as it was even just a couple years ago. My metabolism isn’t what it used to be, so a few runs a week and opting for salad over other treats every other meal isn’t cutting it anymore. Part of me is really angry about this, but then there’s this other part, this new part of me, that shrugs and thinks, Who the hell cares? Who really cares about my weight? It doesn’t change who I am, it’s not putting my health in jeopardy, nor does it stand in the way of me being able to physically do things I once did. Sure, I can’t get into 80% of my wardrobe at this point, and I feel like my closet mocks me on a daily basis for this, but other than that, does it really matter? If it’s not a phase, should I really cry myself to sleep about it every night? Would that be even remotely fair in a world with so much actual suffering and despair? No.

I choose, instead, to accept it. I accept that I won’t drop 10 pounds a month like I could at 25. I accept the fact that in photos from this time last year, I was smaller and my face was less round. While I don’t fully accept my body, I accept the situation. And for me, part of that acceptance is steeped in jokes, making fun of myself. It may not be completely healthy, but it’s how I deal. Because that’s what I’m doing: dealing. If my greatest concern is worrying about running into my ex-boyfriends, then I think I’m doing OK.