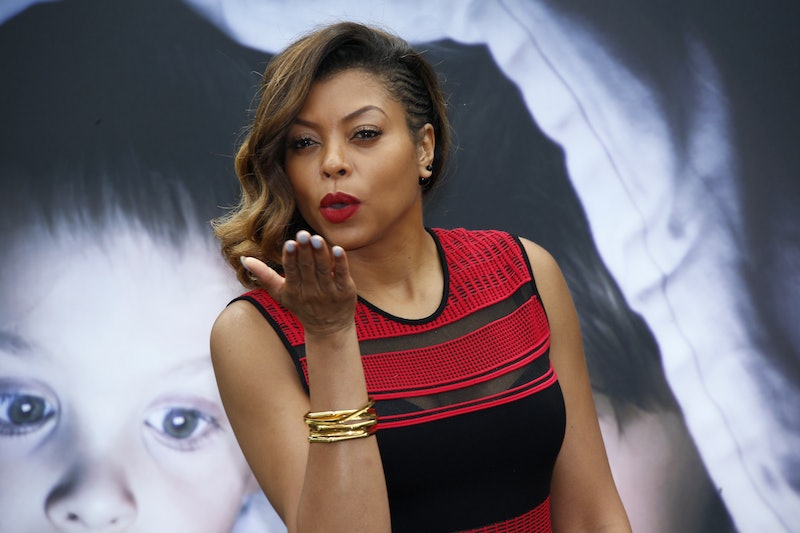 Empire on the whole may have been a bit snubbed (only three nominations? And no nod for Best Drama? Really?), but you know who most certainly wasn't? Taraji P. Henson, who was nominated for Lead Actress in a Drama series. It's a shame the record-and-ground-breaking series didn't pick up more awards love, but at least Henson got the nod she so heartily deserved.

Plus, we can always comfort ourselves with the fact that she's going to absolutely slay the red carpet — like her inimitable on-screen counterpart, Cookie Lyon, Ms. Henson knows how to bring the drama in a major way. Basically, we know she's going to look amazing, so the only question that remains, is how? What exactly will Taraji P. Henson be wearing at the 2015 Emmy Awards?

Let's do a little analysis of Henson's recent fashion history, and make some predictions. Luckily for us, over the past few months since Empire's premiere, she's made quite the glorious array of red carpet appearances, so there's a lot to choose from. Her style M.O. tends towards bodycon gowns, and she sports a lot of black, red (and red's cousin, the ever-trendy oxblood), as well as other jewel tones — sometimes, cut-outs and sequin detailing make their way into the mix as well. So, armed with this ultra-scientific research (plus, the names of a few designers she's been known to frequent of late), let's get ready to do some Emmys fashion forecasting!

Henson wore this to-die-for peekaboo number at the Billboard Awards this year — that, paired with all the sequins she's sported over the years, makes me think something like this could be in her future:

If she decides to take a leaf from Cookie's playbook, she might also want to take this fur fabulosity out for a spin:

At the NAACP Image Awards, Henson stunned in this showstopper. Will she repeat history with another Georges Chakra gown? This fire-engine red confection would be right on the money:

She could also give this simple-yet-stunning dress a try:

Or, this embroidered fish-tailed gown looks suitably dramatic for the occasion:

Last, but not least, this cut-out number (on the right) would look absolutely amazing on her:

Henson positively stunned in metallic, beaded Bibhu Mohapatra at the premiere of Empire, and I could definitely see her returning to the brand. If she does, this regal dress would make quite the badass option (it looks like mourning garb from Game of Thrones, and I mean that in the best way possible):

And, of course, you can never go wrong with a cape. I mean:

What do you think Henson will wear to the Emmys? Here's to all the stylishness that's sure to come!