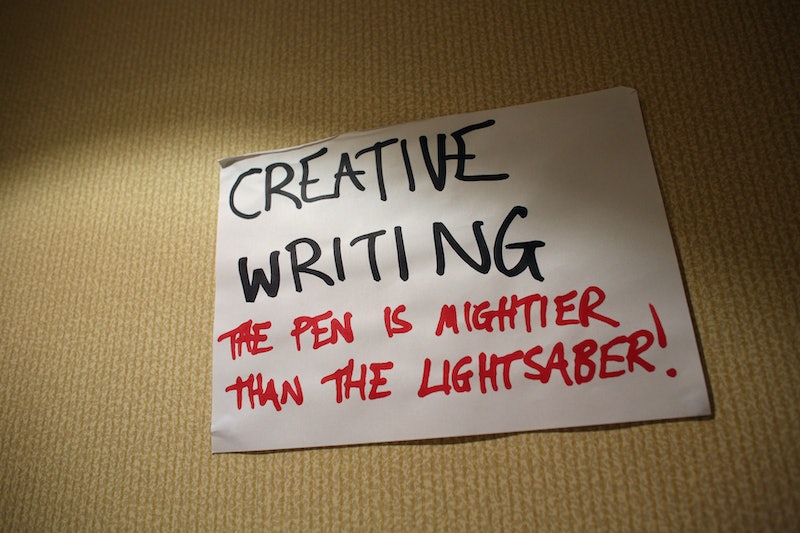 If you're a creative writer, you probably have a complicated relationship with your identity: after all, creative writers have heard the same questions and comments a million times. I've thought of myself as a writer since I wrote a book called Girls & Mermaids when I was 6. By the time I was 16, I couldn't just be a writer. If I wanted to sign up for writing electives, I had to be a creative writer or a journalistic writer. OK, sure, I could be both — just not at the same time, in the same classroom.

Once I arrived at college, a small liberal arts school that attracted dozens of would-be CW majors, I learned something worse: being a creative writer came with a stigma. According to that stigma, I didn't want to do the meaningful scholarship required in other (i.e. non-CW) courses; I was flighty, artsy, yet not wild enough to be a painter; worst, I didn't read. For the first time, I felt self-conscious about considering myself a writer: after all, I didn't want to be like those other CW kids. I didn't want to be a poser.

Now I'm not as insecure as I was in college, and I know other people's behavior doesn't have to reflect on me. These days I teach college composition, and I have a soft spot for those students willing to come out as Creative Writers. Surely they know what that makes them — or they're oblivious and potentially in for a rude awakening. Forget that! I want them to own their love of writing.

So this fall, on the first day of class, I'll tell my students that I majored in Creative Writing — and I'm a writer. If any of those CW-kids want to dish about their choice of major, I'll happily commiserate with them about these 15 things us budding authors are totally tired of hearing.

Um... everything? Nothing? Life, love, and death? This one character who does this one thing? Do you seriously want the answer to this? Do you have two hours?

This maxim is one CW profs are guilty of repeating. Yes, creating a visual (i.e., "showing") is important, but, c'mon, so is clearly establishing a character's setting or location or any other number of expository things (i.e, "telling"). Balance, people!

When doctors or other random people in my life discover I'm a writer, they always ask me this. It doesn't matter that I've been known to read 200 books a year — as soon as this question is posed, I can't remember a single title other than The Catcher in the Rye and The Brief Wondrous Life of Oscar Wao . So, thanks, J.D. Salinger and Junot Díaz: you're always on the tip of my tongue.

Depending on my mood, this can seem more invasive than a question like, "What do you think about during sex?"

5. "Can you tell me which part of that story is actually true? I promise, I won't tell. But, c'mon, did that really happen? I'm not judging. I swear."

Will it mean anything to you if I say prose poems? Sestinas? If I tell you that I write about appetite and desire, doesn't that just sound lame? (Yes, it does, and it also forces me to sell my poems way short.)

Just because I'm a writer doesn't mean I like The Dead Poet's Society (actually, I couldn't even get through the entire flick).

8. "Let me tell you about this one time... oh, wait, promise you're not going to write about that!"

I will never make that promise. And if any writers you know have, my bet is that they're lying.

9. "I just don't get how you can, like, actually enjoy writing."

The same way I don't get how you can spend, like, a hundred years eating and breathing and sleeping without trying to record your experience of being alive? Gotcha.

10. "I could never be a writer — I have literally the worst vocabulary."

I'm never sure how to respond to the excuses non-writers make for why they're not writers? What am I supposed to do, tell you your diction sucks? I'm a writer — not a total jerk.

11. "Why is everything you write so depressing?"

Ugh! Why are you such a narrow-minded simpleton-optimist? This is sorta like asking, why's your face your face?

Trying to avoid people like you who attempt to come between me and my writing!

Creative writers know there's not a great way to answer this question: should we name a bunch of esoteric literary magazines or small presses, tell you the story of how our novel revisions are going, direct you to our agents... or just shrug and say, "Here and there?"

I'm convinced there are very few good ways to respond to a writer's work. Too much praise and you sound sycophantic; too much pausing and you're carefully selecting your words... obviously, to mask your disappointment with the writing.