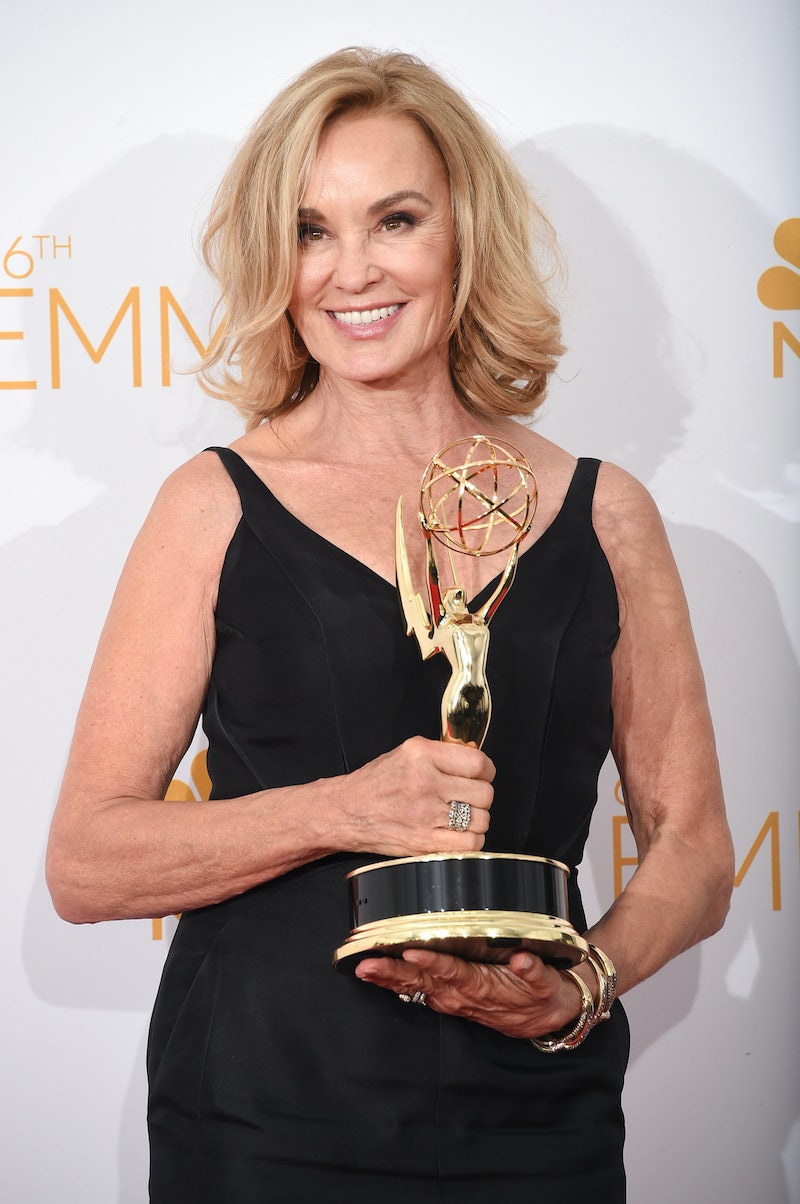 Emmy nominations were announced this morning and it's no surprise the fabulous Jessica Lange has been nominated for Outstanding Lead Actress in a Limited Series for her role as Elsa Mars in American Horror Story. The 66-year-old actress is an award-winning veteran by now, securing three Emmys, two Oscars, and five Golden Globes during her career. So while I am almost positive she'll be taking home the win, I can only predict what the actress will wear to this year's awards show.

I've gotten slightly better at the whole what-celebrities-will-wear-to-what-awards-show thing over the years. If I don't pin-point the designer, I at least have an idea of what style they'll go for. Okay, so my Rihanna MET Gala gown prediction was way off — but come on. Who really thought after her year of tight and cleave, she'd show up on the red carpet in an elegant Big Bird-esque gown? Not I, friends.

You heard it here first: I can (almost) guarantee any gown Lange wears will be far from the stylings of our beloved pop princess.

Over the past five years, the closest thing Lange has worn to a statement gown was her orange J. Mendel asymmetrical neckline column gown for the 2012 Emmys. She even channeled her inner Anna Wintour and rocked a pair of gold sunglasses for that extra cool flair.

In 2013, she changed it up a bit, wearing a stunning black Escada Pre-Fall 2013 gown with a sheer, nude bodice and black firework detailing.

So while she may be known for playing it safe, Lange likes to spice things up every once in awhile, and I'm thinking lucky Emmy award number four (hey, the odds are in her favor), calls for something spectacular.

For the past two years, she's worn black, but judging from her 2013 Escada gown, she's not opposed to a color combo. Therefore, I'm thinking this white slip look would be right up her ally. I've also noticed that Lange is partial to any kind of sleeve, but a strapless gown would do wonders for her figure.

Basically, Lange needs this dress in her life. First of all, royal purple would look fabulous with her skin tone. Second of all, the cinch at the waist and cut out on the shoulder are subtle yet sexy details for a woman with her sophistication. I'm probably just going to buy this for her.

This gown screams elegance, which is what Lange is all about after all. I can picture it now. She's called up to the podium, kisses the presenter slightly on the cheek, accepts her Emmy and looks radiant in this flowing skirt.