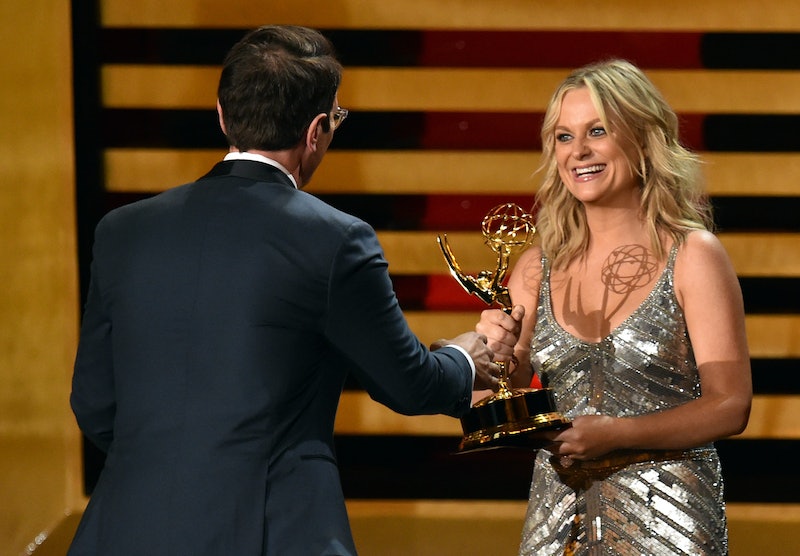 Amy Poehler has had more awards nominations (and a few wins sprinkled in) than you could shake a selfie-stick at. Her latest nod came earlier today with the announcement that Amy Pohler is up for an Emmy for Lead Actress in a Comedy Series for her role as Leslie Knope on Parks and Recreation.

Now, I'm no mathematician, but if we're talking about ratios, Poehler has been up for an Emmy eight times already — and has won exactly zero times. (although she has won a Golden Globe for the role, so all is not lost). She playfully calls herself a "loser," and in 2013 she co-hosted a "losers-only" party with fellow non-winner Jon Hamm.

She's up against some stiff competition in her category this year as women continue to take over the comedy game (and, the world) including fellow Amy, Amy Schumer. Luckily, Poehler has proven that she's a gracious (and hilarious) loser, whether she's hosting a ceremony or contending, she always brings her A-Game to every red carpet the newly-minted red head is on. Whether she wins or not, it's pretty much a given that she'll steal the spotlight at some point or another.

Hey, if you can't beat 'em, you can still outshine them, right?

So in the spirit of upstaging every other nominee at the ceremony this September, here's what Amy Poehler should wear.

Yes, she's nominated for a comedy category, but I think she should bring the dramz to the Emmys with this scantily cut Vera Wang gauze creation. The side cut-outs would add height, and she's already shown cleavage before (remember the shirtless Stella McCartney tux she wore to the Golden Globes a couple years back? A style switch-up might bring her some luck.

I love-love-loved her in Peter Som last year at the Vanity Fair Oscar's After Party, and this highlighter-chic strapless gown could really work with her flaxen hair. Plus, you don't get more quintessentially fall than an orange gown on a red carpet. Instead of an Emmy, maybe someone can just hand her a Pumpkin Spice Latte.

3. Just Be The Statue

Because if Pohler can't get an award, she can at least dress like one.

You'll always be a winner in our eyes, Poehler!