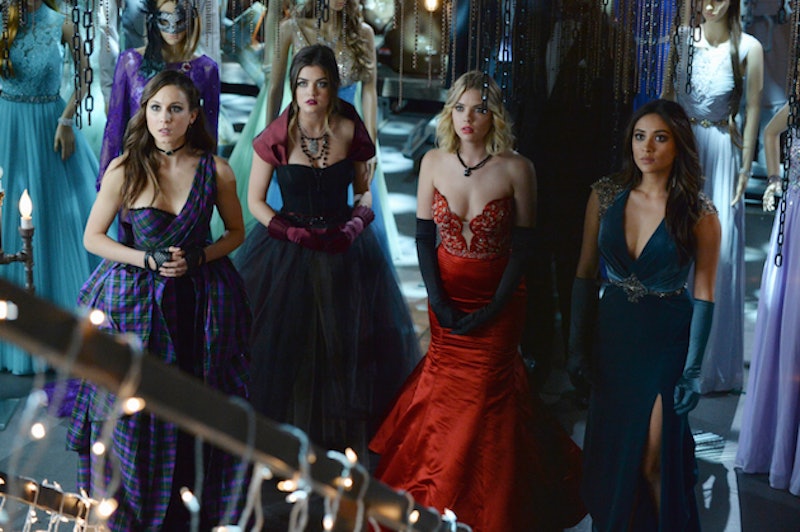 It really is the end of an era: Hanna, Spencer, Aria and Emily are officially graduating from Rosewood High School, and with their graduation comes some obligatory, pre-commencement rituals. Unfortunately for the girls, though, it looks like Rosewood High doesn't want them to attend at least one of these functions. New Pretty Little Liars spoilers from TVLine say that the liars won't get to attend their senior prom due to the girls being a "security risk." (Truer words have never been spoken.) Instead, the girls' mothers throw them their very own prom in Spencer's barn... which is an unfortunate decision, because it seems that Charles might have plans of his very own for the girls. From TVLine:

On the Aug. 4 episode (ABC Family, 8/7c), the girls learn they’ve been banned from attending the Rosewood High prom for “security” reasons, inspiring their moms to throw a DIY dance in Spencer’s barn. They reluctantly agree to make the best out of a bad situation… unaware that Charles is secretly planning to make it “a night they will never forget.” Dun, dun, dun!

As any loyal Pretty Little Liars fan knows, Charles is the big bad under that A hoodie, and he seems to have a serious fascination with the prom. Charles had the girls recreate Jason and Melissa's prom while they were trapped in the dollhouse, and now it seems that Charles is going to follow the girls to their very own dance. Considering that these spoilers are from the Aug. 4 episode "Last Dance" and not the Aug. 11 finale "Game Over, Charles" we probably won't see exactly who Charles is at the prom — but something else huge might just happen.

So, what might go down when the liars have their last dance as high school students? Here are some ideas:

It's unclear whether Ali will be attending prom alongside the other liars (after all, being on the run tends to make you miss a few vital high school moments) but, even if she isn't, that just gives A all the more opportunity to snatch her when the other girls are busy getting dolled up.

Someone Dies At The Hands Of A

We already saw Charles threaten Mr. DiLaurentis, and I wouldn't be shocked if he made good on that promise to off his dad. Other people who could die on prom night? I think it's safe to say that our liars are in the clear, but I'm not so sure about the fate of some of their baes. Lorenzo has gotten pretty close to Ali, and we know what happens when someone tries to take Ali away from Charles: so, could he be on A's hit list?

The Police Finally Find Out About A

The cops know that someone kidnapped the girls, but they have no idea how crazy the whole A thing has gotten. The cops could finally get on the A trail, and it could make Charles act out in crazy ways — like, say, hurting some of Rosewood's finest out of revenge.

The Girls Find Out Someone Has Betrayed Them

We've seen people go over to the dark side before, and it's not like A can work totally alone. Someone close to the girls has to be in on Charles' secret, and might even be working to bring them down. (My money is on Lucas.)

Whatever happens at the prom, one thing is for sure: there will be a lot more than dancing and punch spiking going down.

More like this
Every Horror Movie Reference In The 'PLL: Original Sin' Premiere
By Alyssa Lapid
The 'PLL: Original Sin' Creators Say A’s Identity Will Be “Very Clear” By The Season Finale
By Alyssa Lapid
‘Squid Game’ Creator Hwang Dong-Hyuk Just Dropped A Major Season 2 Tease
By Brian Anthony Hernandez and Bustle Editors
'Stranger Things' Season 5 Will Echo Season 1 In A Key Way, The Duffer Brothers Confirm
By Kadin Burnett and Sophie McEvoy
Get Even More From Bustle — Sign Up For The Newsletter