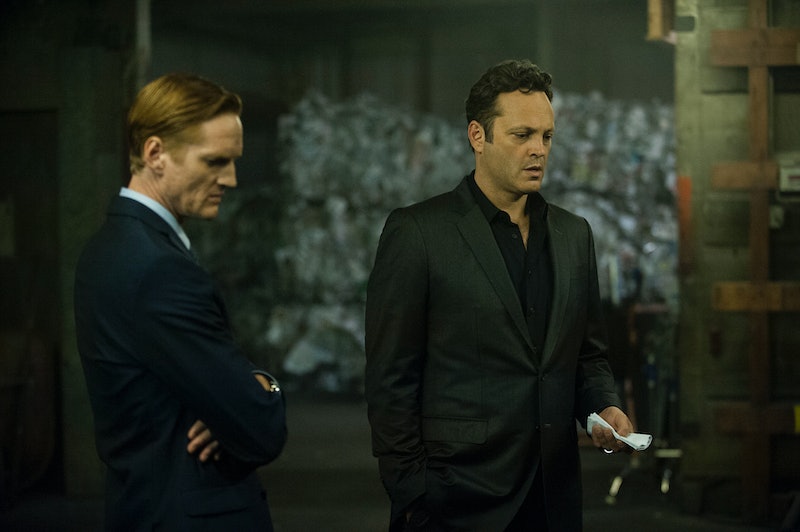 Hello, and welcome to my deep, dark, True Detective hole. There's enough room for everyone down here, don't worry. So come and join me, as I accidentally become obsessed with True Detective Season 2, even though I tried so hard not to become obsessed with it. But it's not my fault the show decided to pull out some Greek mythology, and you guys, I love that kind of stuff. I live for that kind of stuff. So work it into a present-day story, about a shady land-deal, some sketchy cops, and Rachel McAdams? Sign me up. I'm there. Welcome, everyone. And what's the first thing I'm seriously agonizing over? We've seen it happen twice so far now: why are people's eyes being burned out?

It could be nothing. Or it could be everything. I'm really relying on those Greek mythology ties for this one, and there is in fact a story where someone meets that same awful fate with their eyes. Instead of burned out, they're actually pecked out, and this sad fate happens to Ischys.

OK, here's a quick recap of Ischys. He falls in love with Coronis, but Coronis is pregnant with Apollo's child. Apollo goes away, and leaves a white crow to watch over Coronis. The crow sees an affair happen between Coronis and Ischys, and Apollo is so mad about this, he basically throws a hissy fit, and casts a curse while doing so. The curse so badly burns this white crow, it turns it black, which is why all crows are black. Haven't we already seen a black bird on True Detective? At first I thought it was a raven, but now I think it's a crow. Coronis' name is actually derived from the word crow, so now I'm convinced the black bird we saw in Caspere's car and the masked man that shot Ray are both, in fact, crows. The crow protecting Coronis was also supposed to peck out the eyes of Ischys before he got close enough to Coronis, but it didn't, making Apollo even angrier.

I think this semi-mirrors Ray's tragic backstory, in which his wife was assaulted and later had a child, whose paternity is unclear. Ray was so furious, he killed the attacker, which could be read as a parallel to Apollo's curse. But that's not all the myth means for True Detective.

Taking apart all these pieces, I think it really has to do with infidelity. Caspere had an obsession with sex, so maybe he had an affair with a married woman. Maybe Stan (one of Frank's henchmen who was killed in a similar way) did too. There was no "force" to stop them from doing so, even though there should have been — that proverbial crow to warn someone else of what was going to happen. Their eyes should have been pecked out before the tryst happened. However, it happened. It happened to Caspere. It happened to Stan. When the woman's husband or partner discovered the affair after it had already happened, like Apollo, he killed them and burned out their eyes as a warnig to others.

And who is doing this? Apollo, whoever he is in the world of True Detective, though I don't think we've met him (without a mask) yet. So either I've just come up with the greatest True Detective theory of all time, or this season is really going to drive me crazy. Let's wait a few more episodes before we decide which one.