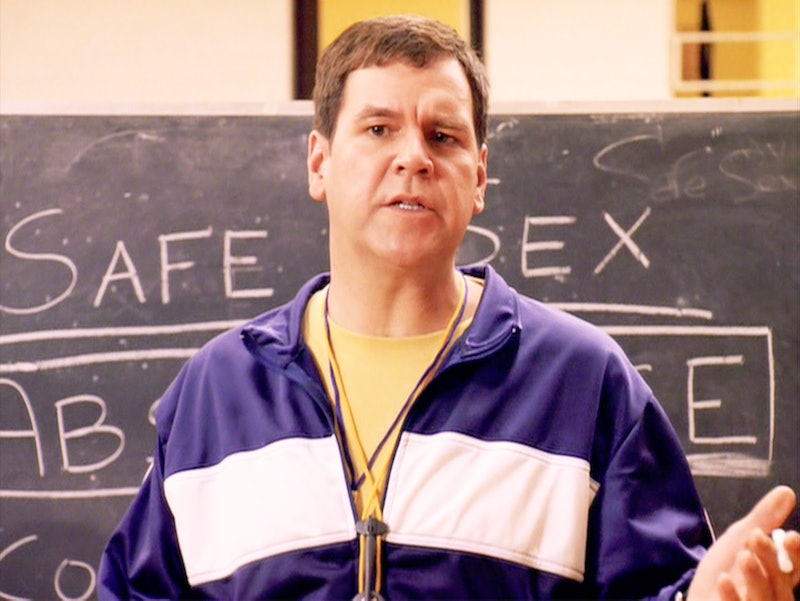 Do you remember what happened the first time you thought to ask, "Hey, where do babies come from?" Some of our parents took the first steps in initiating "the talk" with us and were completely candid, while others waited for teachers to tackle the topic and prayed their kids wouldn't come home with more questions about what exactly went where. All the elementary school teachers in my life — and there are many — tell me they dread tackling sex ed with their students, mainly because some bright, innocent young child always manages to come up with a question that totally throws them for a loop. I find these stories hilarious, of course, because I'm not the one standing in front of a room with no idea how to respond to a bunch of children's earnest sex-related questions.

But no matter how forthcoming our teachers and parents were, let's be honest — plenty of us still panicked over myths such as getting pregnant from a make-out session or a swimming pool.Those of us prone to anxiety then proceeded to lose sleep due to our obsessive worrying about how the heck we were going to handle this immaculate conception. When we finally got our period, the sense of relief was so overwhelming that you'd have thought we'd actually had unprotected sex and then dodged a major bullet by not ending up pregnant.

However, looking back at historical beliefs about pregnancy and contraception, our own teenage beliefs about conception suddenly don't seem quite so far-fetched. The following five myths and practices sound downright crazy, but just a few of these theories possess elements that may sound frighteningly familiar:

1. Your Uterus Wanders Through Your Body (Ancient Greece)

In Ancient Greece, a woman's uterus was thought to exist separately from her body. This meant that it was free to wander around inside the body, rather than always hanging in place. So if a woman wished to become pregnant, it was believed that placing an object with a sweet odor in the vagina would attract sperm to the womb. In cases where women didn't want to get pregnant, the opposite approach was taken — a foul-smelling object was inserted in the vagina because it was believed that it would keep the uterus and sperm far away from each other. The annoyance of remembering to take your birth control pill at the same time every day suddenly doesn't sound so bad, right?

2. Babies Are Made Out Of Period Blood (The Middle Ages)

During the Middle Ages, medical authorities generally concurred that pregnancy was caused by the combination of male semen and female menstrual fluids. However, there were still some dissenters who believed that male semen was the sole element needed to conceive.

It was also widely believed that, in order for conception to occur, both the man and the woman needed to be equally satisfied by the intercourse. Does this sound familiar? If so, it's probably because a politician named Todd Akin publicly stated in 2012 that pregnancy after a "legitimate" rape is extremely rare because "the female body has ways to try to shut that whole thing down.” Akin would have clearly been better off living in the Middle Ages, because scientific facts wouldn't have salted his game and we wouldn't have been forced to listen to him. It really would have been a win-win situation!

3. Tiny People Live Inside Your Womb At All Times (Enlightenment Era)

Preformationism, also known as preforism, was a popular theory in the 17th and 18th centuries. It proposed that, at the time of conception, the embryo was already completely formed, only microscopic in size. After fertilization, the embryo would grow, eventually becoming the size of a baby at birth. By the early 1800s, more advanced microscopes were developed that allowed scientists to see that embryos soon after fertilization were small collections of cells, rather than complete human beings. The idea of tiny, fully-formed humans hanging out in our wombs at all times is slightly creepy, so it's really great that this theory has been fully debunked.

4. Check For Pregnancy By Peeing On Wheat (Ancient Egypt)

The cheap pregnancy tests we find at drug stores aren't always reliable, but previous generations had it way, way worse. But you don't have to take my word for it— check out two of the more out-there (and way less accurate) pregnancy tests women used throughout history.

Ancient Egypt: Instead of peeing on a stick, women urinated on both barley and wheat seeds and then planted them to find out whether or not they were pregnant. It was believed that if the barley grew, the woman was pregnant with a boy. If the wheat grew, she was pregnant with a girl. And, if neither grew, she wasn't pregnant at all. So, waiting five minutes to see if the strip turns pink suddenly doesn't seem like such an eternity... at least when you compare it to sitting around, waiting to see whether or not the grains in your yard are sprouting.

Middle Ages Through The Seventeenth Century Europe: Did you know that "piss prophet" used to be a profession? These supposed experts diagnosed illnesses by inspecting urine, and claimed they could determine whether or not a woman was pregnant by looking at the color of her pee.

The origins of the "lunar effect" theory — the idea that cycles of female fertility follow the cycles of the moon — date back to ancient Assyrian writings, but for some reason this myth has lived on, despite overwhelming scientific evidence to the contrary. One version of the theory proposes that female fertility corresponds with the moon because both the lunar cycle and the menstrual cycle occur every twenty-eight days. Another variation suggests that the gravitational pull from the moon causes women to go into labor. Studies of this theory date back to the 1950s and no correlation has been found — in short, the same number of babies are born on a full moon day as any other day of the year.

Old wives tales die hard, but I'm currently taking a moment to be grateful that there are no miniature humans living inside me and I'll never need to grow a garden of grains to find out whether or not I'm pregnant. It's appreciating the little things that really gets you through the day, you know?

More like this
Young People Are Still Experiencing Period Poverty In UK Schools
By Sophie McEvoy
What Is The Forest Personality Test? The TikTok Trend, Explained
By Georgina Lawton
Hinge's New NFAQ Feature Is Demystifying Queer Dating
By Emma Carey
The Best Time To Date After A Breakup, According To Experts
By Bustle Editors
Get Even More From Bustle — Sign Up For The Newsletter