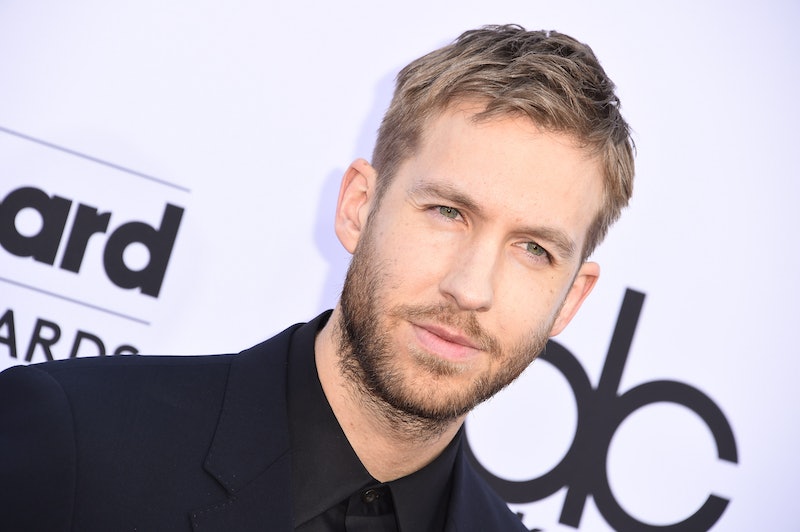 While some of us (aka me) like to maintain a cynical approach to all things pertaining to love, sometimes even the the most painfully practical among us can be swayed by a genuine show of love and affection. Case in point: While doing a round of radio interviews in the UK this week, Calvin Harris gushed about his relationship with Taylor Swift — and let me tell you, after digesting what was said, even I'm wooed by this couple. Not only did Harris amp up the cute/caring/attentive boyfriend factor tenfold, but he also revealed a lot about the nature of his relationship with Swift in a way that's totally endearing.

In fact, I wouldn't be surprised if Harris guzzled a truth serum this week, because the DJ was a total blabbermouth to both KISS FM UK and HITS Radio, where listeners had the honor of hearing T. Swift's new boyfriend get particularly candid.

While dishing about his relationship to KISS FM UK, Harris had this to say:

It’s going absolutely fantastic. It’s interesting, because obviously there’s different things written about it every day and even if we don't do anything publicly for a while, someone will make something up. For me, it could be a lot worse, and I’d still be like insanely happy with her. So, I’m good with it.

*Tries to wipe stupid grin off of face*

Anyway, if those words weren't enough for you, here are some more aww-worthy quotes from Harris' interviews that prove Tayvin is in it for the long haul:

Harris also told KISS FM UK that the rumors "get more and more ridiculous" as time goes on. "From me apparently being allergic to cats, or Taylor and I are moving in together, or we’re getting married next week," Harris said. But it's cool, cause he takes it all in stride: "It's a lot, but you've just got to take it how it is."

2. Besides, He Sort Of Loves Tay's Felines As If They Were His Own

And he sure hangs out with them an awful lot for someone who's "allergic."

3. He Takes The Paparazzi In Stride

"On the other hand, real life is happening," Harris told KISS FM UK of their private life. "There’s a whole bunch of times where we’ve been hanging out and nobody's clocked it. It's not like every single time we go out, we get a photograph taken of us."

Yep, dude has an amazingly level-headed and optimistic outlook for someone who gets cameras shoved in his face practically every day. And that's definitely a great quality to possess when you're dating a paparazzi magnet like Swift.

4. They're Making It Work

When you're both mega stars (and one of you is currently on a massive worldwide tour), doing the long-distance thing is an unfortunate reality. But according to Harris, he and Tay look on the bright side. "The luxury is we can both travel very easily," he shared with the radio station. "I think that's a reason that it works so well... It's really not hard to see each other on a regular basis."

Guess there's no such thing as "long distance" when you've got the beauty of a private jet at your disposal, right?

5. He Appreciates Her For Who She Is And What She Brings To The Table. (Literally.)

Perhaps one of the best quotes from the HITS Radio interview was when Harris confirmed what we all know to be true: Swift is as "special" as we all know her to be. But, of course, he did so in the best way ever, saying: "It's boxes I didn't even know existed, she ticks. It's really ridiculous... She's generally an incredible cook and human being." Awww.

6. They're Cliche, But In The Best Way

You know all those sappy quotes about perfect matches and soulmates and blah, blah, blah? Well, call me crazy but I'm pretty sure saying someone checks boxes you didn't even know existed points to big, epic love — and it sounds like these two have definitely got that.