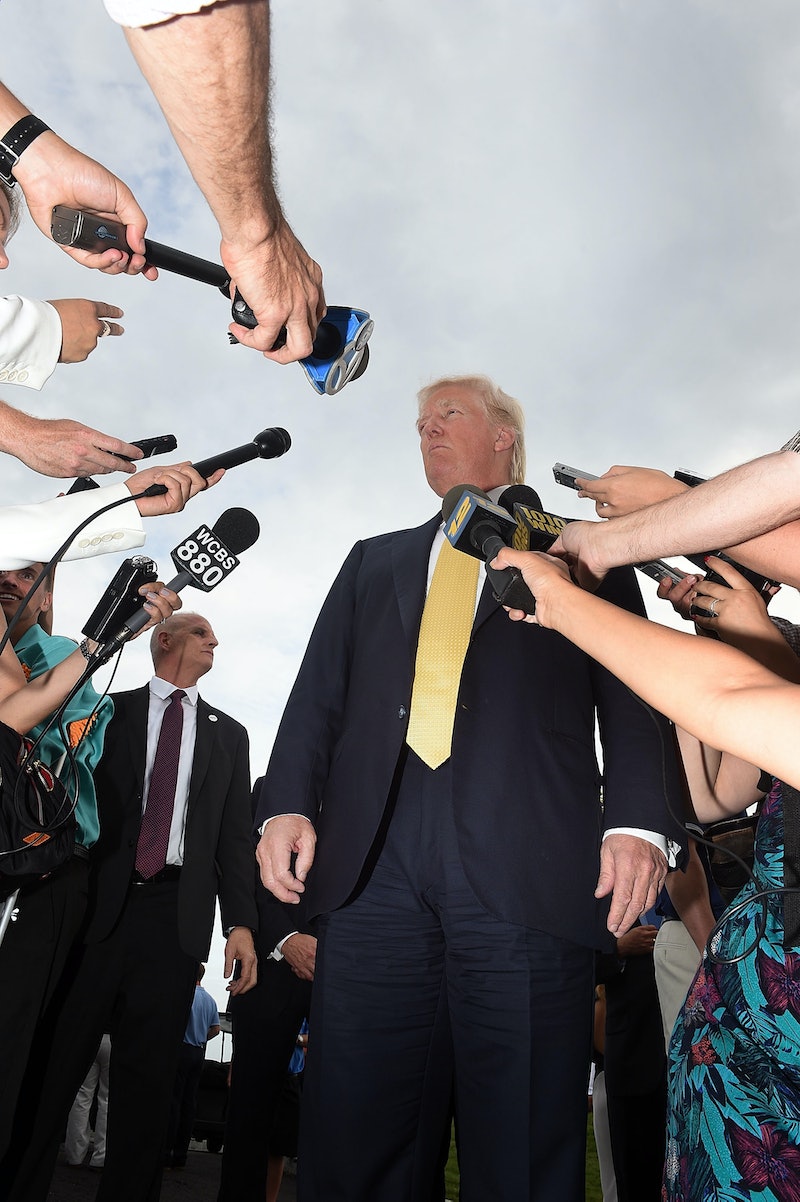 When you hear the name Donald Trump, what's your gut reaction? Do you actually think of him as a presidential candidate? A bombastic real estate mogul? A reality TV star? It's a perceptual question that could be important going forward, and it's a call that some of the places covering him will have to make: is Donald Trump a political story, or entertainment? Or can he truly be both at once?

It's an issue that feels very apropos, especially after an announcement from Huffington Post editorial director Danny Shea and Washington bureau chief Ryan Grim — as of Friday morning, they've decided that Trump coverage will be restricted to the site's entertainment pages, because they regard his campaign as a "sideshow."

After watching and listening to Donald Trump since he announced his candidacy for president, we have decided we won't report on Trump's campaign as part of The Huffington Post's political coverage. Instead, we will cover his campaign as part of our Entertainment section. Our reason is simple: Trump's campaign is a sideshow. We won't take the bait. If you are interested in what The Donald has to say, you'll find it next to our stories on the Kardashians and The Bachelorette.

Obviously, you have to give it up to anyone who's needling Trump a little. The guy's decidedly unpresidential candor practically invites the media to turn him into a pincushion, which is probably part of the reason he's being relegated to their entertainment section in the first place. Generally, when people are seriously hoping to be president, they measure their words a little more carefully, so as to avoid five-alarm chyrons like this.

It's a challenging question, though. On the one hand, you have a man whose idea of cutting a presidential posture is to claim he'll lower oil prices by cursing out OPEC — because saying "you're not gonna raise that f***ing price" is obviously masterful deal-making. But on the other, you've got a man whose poll numbers place him in a contender position in the GOP primaries. So, which way to go? A sideshow, or a seriously worrisome display of America's political id?

Obviously, some fair-minded people are bound to see this differently. But if you're looking for somebody to soothe you, and to reassure you that you don't have to worry about taking Trump seriously, I'll be that guy. Don't worry — it is a sideshow, and there's precisely zero chance for Trump once actual voters start weighing in.

Basically, his ostensible contender status in nationwide polls is telling a deceptive tale. Earlier this week, a new Suffolk University/USA Today survey found Trump leading the GOP's jam-packed primary field with 17 percent support, outpacing the highly electable Jeb Bush by three points. It's enough to make you shudder, right? Whatever you think of the prospect of a third Bush in the Oval Office, it's probably a safer bet than even a month of Trump.

But here's the dirty little secret for the Trump camp: his success looks like it has a very low ceiling. As Natalie Jackson detailed for Huffington Post last month, Trump's been battling for a narrow slice of voters who're even open to supporting him. Polls conducted back in June found that he suffers from abysmally poor favorability ratings — the worst of any presidential candidate since 1980 — and that a dizzyingly large number of Republicans, 59 percent, had ruled out voting for him from the outset.

Those numbers have improved since then, sure — his favorability numbers are on the upswing, and his savvy for courting the media spotlight have given him something of a leg-up. But the fact remains that Trump is benefitting from an unusually large, diluted field of GOP candidates — if he even stays in the race long enough for the field to start narrowing, you'll surely see conservative voters start funneling their support to a more credible national candidate. After eight years of the Obama era, you have to think Republicans will have the sense to prioritize electability.

And besides, even if he somehow won that GOP nomination, which is about as unlikely a premise as any, his chances as a national candidate as about as dismal as it gets. Despite his recent gains with some GOP voters, it turns out that broad-brushing Mexican immigrants as criminals and rapists doesn't help your standing with Latinos.

If the Republican Party failed to learn its lesson after Latino voters torched Mitt Romney in 2012, I can only imagine what the conversation would be like in Trump's case — a recent ABC News/Washington Post poll pegs his unfavorability with Latinos at a staggering 80+ percent. Obviously, I don't think Trump has any chance at the nomination, and perilously few serious observers do. But if he somehow did, it could go down as the first time a presidential candidate doomed their own prospects in the first five minutes of their own announcement speech.

So basically, rest easy. Donald Trump won't become president, and you can feel secure in viewing his candidacy as the lighter, farcical fare that it is.