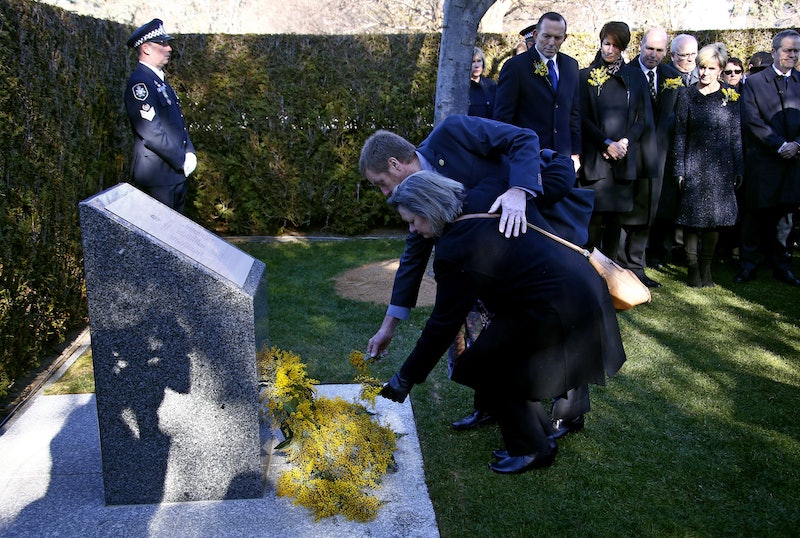 It's been an entire year since Malaysia Airlines Flight 17 was shot out of the sky over conflict-ridden eastern Ukraine. And yet, the families of the 298 victims still have few answers as to who is responsible for their loved ones’ deaths. Led by the Dutch Safety Board, a team of investigators is working to piece together what happened on July 17, 2014 to bring the commercial airliner out of the sky and strew wreckage across miles of ground in the Donetsk region. Preliminary reports from the United States and Dutch investigators claim that a surface-to-air missile hit the commercial jet when it was cruising at an altitude of 33,000 feet, exploding the plane in mid-air and killing all 283 passengers and 15 crew members aboard.

"Today, our people recall this tragedy and share the grief and sorrow of the families who lost their loved ones," Ukrainian President Petro Poroshenko said in a video message Friday.

The Netherlands, Ukraine, and Australia all held memorial services Friday to commemorate those who list their lives on flight MH17, which left Amsterdam on July 17 last year bound for Kuala Lumpur. Nearly 200 Dutch and dozens of Australians were on board Flight 17.

While all but two of the victims’ bodies have now been recovered and returned to their families over the past year, no individual or group has stepped forward to claim responsibility for firing the missile.

"It was a year of horror, of waiting, but it feels like yesterday," Piet Poeg, who lost three family members on MH17, told CNN. "It could be Russia, it could be Ukraine, it could be the separatists. I think it is important that they find out who did it, who was responsible for it."

In turn, Australia, Belgium, Malaysia, the Netherlands, Great Britain, and Ukraine — countries that all lost nationals in the tragedy — have called on the U.N. Security Council to create a tribunal to investigate the MH17 disaster and determine which parties are responsible.

"Justice for the victims from the first moment has been our top priority," Dutch Prime Minister Mark Rutte said this month, reports CNN. "We are now asking support in the United Nations for the creation of an international tribunal."

But Russian President Vladimir Putin has roundly rejected calls for UN involvement in the matter. On a call with the Netherlands’ Rutte Thursday, Putin reportedly called the push for a tribunal “counterproductive and premature,” according to the BBC.

But new video footage released by News Corp Australia Friday could upend Russian officials’ claims that the Ukrainian army is responsible even further. The 17-minute tape — which has not been independently verified — appears to show Russian-speaking separatists rummaging through wreckage at the crash site shortly after the plane went down last year. In it, the separatists express their surprise that the debris is clearly from a commercial airliner that was carrying foreigners.

Australian Prime Minister Tony Abbott reacted strongly to News Corp Australia’s footage. According to CNN, the prime minister said that the video “highlights the fact that this was an atrocity, it was in no way an accident.”

“They may not have known that they were shooting down a civilian passenger plane, but they were deliberately shooting out of the sky what they knew was a large aircraft,” he continued.

Even as Russia and the pro-Russian separatist forces in Ukraine continue to point fingers at the Ukrainian army for shooting down the plane, consensus is emerging among the Dutch-led investigative team around what happened. According to CNN, sources familiar with a preliminary draft of the Dutch investigation report said that it appears a Russian surface-to-air missile hit the plane in mid-air, splintering it and killing all aboard. The missile is alleged to have come from an area under control of the Donetsk People’s Republic and pro-Russian separatists at the time.

The Dutch investigators, however, are not expected to release a final draft of their report into the incident until October. Separatist forces have complicated their efforts by denying them access to the crash site and tampering with evidence at the scene.

"Coordinated access to the wreckage site by the international team of air safety investigators has not yet been possible," the Dutch aviation investigators said in their first report, released last September. "It is the intention of the Dutch Safety Board to visit the site whenever it is possible to safely conduct further investigation of the wreckage."

In the mean time, a Dutch chief prosecutor is also looking into bringing criminal charges against the individuals responsible for shooting the plane down and ending nearly 300 lives. According to CNN, prosecutor Fred Westerbeke has identified several persons of interest but does not have enough evidence to point fingers at any suspects at the moment.

Despite the difficulties that the investigators have had in accessing the crash site, Westerbeke is confident the truth will come out.

"I really believe we will have a prosecution, yes," he told CNN. "Will the suspect be arrested and handed over for prosecution? That is more difficult to answer."

At the moment, the conflict in eastern Ukraine remains far from resolved. Although the pro-Ukrainian forces and the pro-Russian separatists signed a ceasefire back in February, neither side has fully refrained from violence, and Joint Ceasefire Coordination Center estimates that more than 100 ceasefire violations happen each day as the two sides struggle for control of Ukraine’s Donetsk and Luhansk regions. And the incidence rate is only continuing to climb, the Center warns.

The political division has splintered more than Ukraine. Since the widespread protests brought down President Viktor Yanukovych, who prized the country’s relationship with Russia, in February 2014, tensions have risen between the United States and its former Cold War antagonist. As such, the geopolitical rift looks to foreclose any quick and clear-cut resolution of MH17’s destructive end, as much as the families might advocate otherwise.