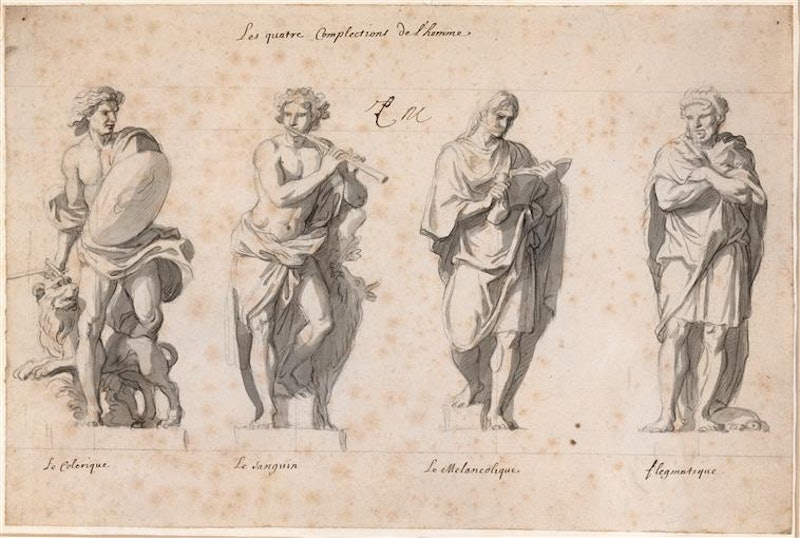 Although there's still tons we don't understand about how the mind works, modern psychology has come a long way. When, for example, was the last time you heard someone attempt to diagnose another person with a condition that stems from the four humors? Hopefully your answer is "never," since the four humors haven't been used as a basis for psychology in centuries. But it turns out that sometimes they're still used as a reference point — and, indeed, you can actually find out what your four humors personality type is with the help of a thoroughly modern test. Who knew, right?

Most of what I know about the four humors I learned studying Renaissance drama in college and grad school (once a theatre person, always a theatre person). They pop up frequently in the works of Shakespeare and his contemporaries, largely as a way to poke fun at specific types of people in the comedies, although they date all the way back to the ancient world. We think the four humors' very beginnings popped up in ancient Egypt and/or Mesopotamia; once the Greeks came along, though, they really started having their day. Somewhere around 400 BC, the working theory became this: That the human body played host to four substances — black bile, yellow bile, phlegm, and blood — which, when balanced, resulted in a healthy, happy person. If you were sick? Well, that meant that your humors were out of whack, typically either by having an excess or a deficit of one or more of them. Ayurvedic medicine in India also had a theory of humors, although admittedly I know much less about that one (that is, I know pretty much nothing at all).

The personality test I will be using myself as a guinea pig on today, however, has its roots in the Greek version, which was the medical norm all the way up until the early 19th century. Each of the four humors was associated with a particular element, bodily organ, and season of the year, as well as an overall personality type and a few specific traits:

But although the popularity of the humors waned as we started to figure out how the body and mind actually work, they've never fallen out of favor altogether. They're still useful as metaphors, particularly in psychology — and there's even a modern test intended to figure out which humor-based personality type you correspond with. It's called the Open Four Temperaments Scales, and it was developed by Eric Jorgenson in 2014. Unlike most of the other science-based personality tests I've taken recently, this one is pretty quick; it takes around five minutes to complete if you're not documenting your results like I did.

Here's how it went for me:

First, you're given a whole bunch of words and asked to rank them on how well they describe you. There's a ton of them, but here's an excerpt to give you an idea of the sorts of words we're talking about here:

And then you're asked to do the same for a number of sentences, all of which vary by theme. Some of them ask about your productivity habits:

Others about how you feel about where you're at in life:

Some ask you how you feel about other people and how confident you are in yourself:

They ask after your likes and dislikes, particularly with regard to the arts:

And, inexplicably, there's this, too:

Which I presume is getting at how skeptical you are. Or something.

That's actually not too far from the mark. I mean, like most people, I would argue that my overall personality consists of different elements from each of the different temperament; I'm also probably a little more high-strung than most phlegmatic people. When I'm at my calmest, though, I'm quite phlegmatic indeed — I've come to cherish the moments I can be lazy (there aren't many of them), but I'm hyper organized and would probably make an awesome administrator if that's what I actually wanted to do with myself. I try to roll with change, but sometimes I find it kind of frightening. And yeah — I can be passive-aggressive. I'm working on that, though.

As always, I'm a firm believer that everyone is more than the sum of their parts. Sometimes, though, these kinds of personality tests can be useful for not only learning more about yourself overall, but for identifying both your better and… let's call them less positive traits. Once you've done that, you can work on improving yourself — because we all deserve to be the people we really want to be. We just have to put in the work to get there.

Head over here to give the four humors personality test a whirl yourself.