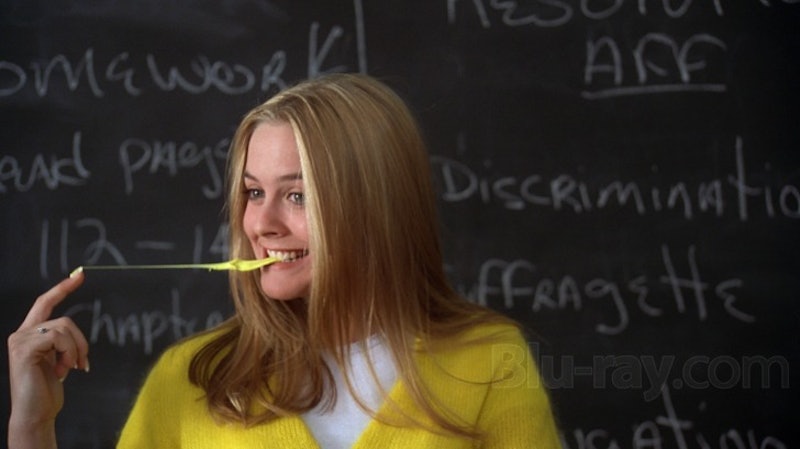 It’s been 25 years since Clueless came out, and outdated tech aside, it’s still as relevant today as it was then. This is in part due to the video for Iggy Azalea’s “Fancy” that came out more than a year ago, but also due to constant cultural references to the Alicia Silverstone-led classic. Some fans of the iconic '90s high school movie forget that it was also reviving another classic. Clueless takes its plot and characters from Jane Austen’s Emma, much in the same way that Bridget Jones’ Diary updated Jane Austen’s Pride and Prejudice. And the update feels, in my mind, much truer than the other Emma adaptation starring Gwyneth Paltrow that came out a year later.

For those who haven’t read the book, the titular Emma is an overachiever who lives with her father; she’s basically the alpha in her small town. Emma, growing up with a perfect life and admired by all, faces her first setbacks when she involves herself in matchmaking, something she is less good at than she imagines. As you can see, there are a lot of similarities between Emma and Clueless, despite their different time periods. Here are the major overlaps:

Emma is well regarded by her family and her community, with manipulation as her major weakness, a flaw that comes more into light as the book progresses. She lives in wealth with her indulgent father after her mother dies. This is exactly Cher’s background and character arc.

Emma makes a project of Harriet Smith, just like Cher makes a project of Tai. Harriet is an outsider because she is lower class, while Tai is the new kid in school. While both defer to the judgment of their mentors, they ultimately know what’s best for themselves.

Both Josh and Knightley start off as brother figures before becoming major love interests. Both are older than their women, with a slightly disturbing prior familial relationship.

Cher/Emma initially try and set up Tai/Harriet with Elton without realizing the very obvious fact that he is in love with Cher/Emma. In Emma, Emma paints a picture of Harriet for Elton, while in the book Cher takes a pic of Tai that Elton treasures. It makes more sense that Elton would want a painting by his love than a photo snapped by her, but either way, the guy sucks.

Though initially appealing, Christian was an unsuitable paramour for Cher because he is gay, while Frank was bad for Emma because he was engaged to another.

Both were deemed unsuitable (stoner and farmer, respectively) for Tai/Harriet, but they were ultimately pretty great guys.

More like this
Then Vs. Now Photos Of The 'Enchanted' Cast In 2007 & The Sequel's Stars In 2022
By Marina Watts
See 'Twilight' Stars Together Again For A Sweet Cullen "Family Reunion"
By Stephanie Topacio Long
'The Princess Diaries 3' May Go Ahead Without Anne Hathaway
By Darshita Goyal
How The Thanksgiving Episode Of 'Gossip Girl' Changed Pop Culture History
By Gabrielle Bondi
Get Even More From Bustle — Sign Up For The Newsletter