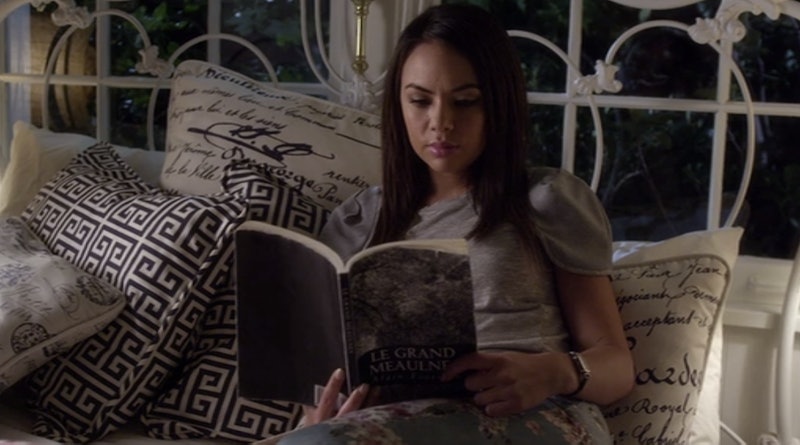 Pretty Little Liars wasn't kidding when it declared Season 6A the "Summer of Answers." We're still episodes away from the finale, and already we're untangling the A mystery piece by piece. We now know that Big A himself, Charles DiLaurentis, is alive, and that he's returning home to Rosewood to confront the father that shipped him off to Radley — and perhaps the liars for one final showdown at prom. The one thing that we don't know (and the one thing we really, really want to know) is who is under that mask. We won't know who Charles really is until the Season 6A finale, but there's a musical clue in Pretty Little Liars Season 5 episode "Taking This One To The Grave" that might reveal something major.

This jaw-dropping Season 5 episode features Mona "dying" at the hands of A, who has framed Ali for the crime. We know now that Mona never actually died, but even so, the episode was still one of the craziest in Pretty Little Liars history. It's definitely worth a re-watch in order to pick up on little clues about A's real identity, but there is one clue you might not have noticed the first time around. It points to one specific character as the guy underneath the mask, and you have to do some more sleuthing to find out just who that person is.

Prior to her "death," Mona helps the girls attempt to prove that Bethany was killed by Ali — not Spencer. The girls go to Mona's room, where she's reading a book and playing a song on the radio. I thought the song choice was curious, so I did some research. It wasn't easy to find, but I did track down one Reddit post by user Ceceice, whom seemingly identified the tune. According to this user, the song Mona is playing is titled "Paris Skies A," and was reportedly performed by Eve Lousieau, who performs Edith Piaf songs. Edward Jay is also credited on the track, and the Reddit user mentioned that the song seemed to be produced for the show, as it cannot be found on any streaming service.

Here it is below:

Why is that weird? Well, it wouldn't be — until you look at the names of the people who wrote the song. When translated from French, the word l'oiseau (the same name as the last name of the performer) means "bird." It's not the only bird reference within the song — "jay" is the name of a type of bird.

So why is that important? Well, the song is allegedly titled "Paris Skies A," which could hint that the song is a clue to the identity of Big A. If that's the case, the song may be hinting at another person who also has a bird in his name — and that's Wren.

So, could Wren really be Charles in disguise? It's looking more and more likely, especially when you consider the clues in the video above... but we'll have to wait to find out. In the meantime check out Bustle's PLL podcast.

More like this
The 'PLL: Original Sin' Creators Say A’s Identity Will Be “Very Clear” By The Season Finale
By Alyssa Lapid
Every Horror Movie Reference In The 'PLL: Original Sin' Premiere
By Alyssa Lapid
10 Famous People You Forgot Guest-Starred In The Original 'PLL'
By Brad Witter
Does 'Locke & Key’s Ending Mean There Could Be A Season 4?
By Sophia Moore
Get Even More From Bustle — Sign Up For The Newsletter