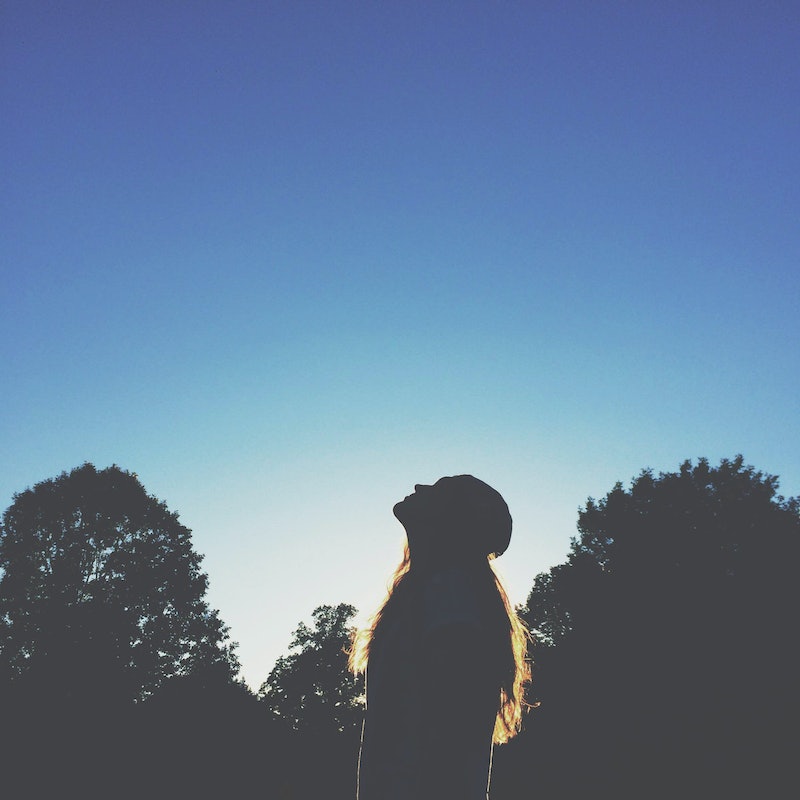 Like many Americans, I grew up in a Christian home — and there really were lots of great things about that. Religion can offer a sense of peace and community, and even some pretty fun holidays. I genuinely enjoyed all those outdoor church picnics and delightfully bad Christmas pageants my parents dragged me to, and if I hadn’t been raised in the church I wouldn’t have met any of my dearest childhood friends. But as an adult, I’ve found myself identifying as agnostic more and more, and happily so.

Just to clarify, as Wikipedia puts it, identifying as agnostic means you believe that, "the truth values of certain claims — especially metaphysical and religious claims such as whether or not God, the divine or the supernatural exist — are unknown and perhaps unknowable.” It's a belief system that, according to a recent Pew survey, is held by up to 23 percent of Americans. (Although, the survey also grouped atheists with agnostics, so that number may actually be a bit lower.)

Being agnostic has brought me peace in a way religion never could, but it seems to me that the term is one a lot of people don’t quite understand or are just a touch uncomfortable using. So much so, in fact, that I’ve even known agnostics who didn’t realize they were agnostic.

1. Most Of Us Are Fine With Religion

Being agnostic does not mean you hate religion. In fact, many agnostics (like myself) were raised religious, and still consider themselves culturally religious. I may not believe Christianity is the one true way to a heaven I’m not convinced does or doesn’t exist, but I will always consider myself a cultural Christian because my family has been Christian for generations. With or without my cultural Christianity, I would have some respect for religion because it has inspired people like Mother Theresa and Mahatma Ghandi to do great things for humanity, and also because religion is a part of our world’s history. It deserves respect.

So, don’t think for a second that agnostics despise religion, because most of us really don’t.

Atheism is just as hard for me to wrap my head around as religion. It really is. But that doesn’t mean I don’t respect and value it as well.

Do I believe that we, tiny humans, can just know that there probably isn't any possibility of a higher power? No. But I don't necessarily believe there's a guy sitting in a room somewhere being God either, so I kind of get where atheists are coming from. I also respect atheism and atheists' perspectives, because their desire to do the right thing does not come from a potential supernatural rewards system. (Not that there's anything wrong with doing the right thing to please your chosen deity, but I've always found it a tad more impressive to be a good person when you feel with total certainty that the end is the end.)

Agnostics understand that there are reasons people believe in the creation of the universe by a higher power, and we also understand that there's reason to believe our existence could have been a strictly spontaneous and scientific phenomenon. But we don't really want to hear any of it, because we've already heard all of it, and we still decided to be agnostic. Please don't waste your time trying to convince us to change our minds. It won't work, and it will just make things awkward between us.

4. We Find Plenty Of Peace In Our Uncertainty

Like I said, being agnostic has brought me more peace than religion ever could. I'm perfectly comfortable not knowing, or even thinking I'm capable of knowing, all the answers to all the endless metaphysical questions we humans think up. The fact is, my entire existence is going to be less than a blip on this universe, and I think it would be pretty arrogant to assume I could ever know with total certainty that there is or isn't a God out there calling the shots. But it doesn't bother me to not know. Rather, accepting uncertainty brings me a lot more peace than fighting it ever could.

5. ...But We're Open To (Almost) Every Possibility

Another reason agnostics choose to be agnostic is because it's so freeing to think that, concerning the metaphysical, anything is possible. Being agnostic means you can question everything, question nothing, or do both. It means you are open to, and can genuinely value, every spiritual belief system without having to pick one to hold onto forever.

It's the most non-committal way to commit to a belief system, and because of this, it's never constricting or suffocating in the way that religion can be, (and definitely was for this agnostic) and it's not as inflexible as atheism can be either. Essentially, agnosticism is spirituality's smorgasbord — and I love it.

More like this
Why You're Seeing Green Bandanas At Abortion Rights Protests
By Lexi Inks
How To Come Out Online, According To Trevi Moran
By Melanie Mignucci
Jujubee’s Humble Reminder
By Sam Ramsden
Aesop's Queer Library Is Open
By Tomi Otekunrin
Get Even More From Bustle — Sign Up For The Newsletter