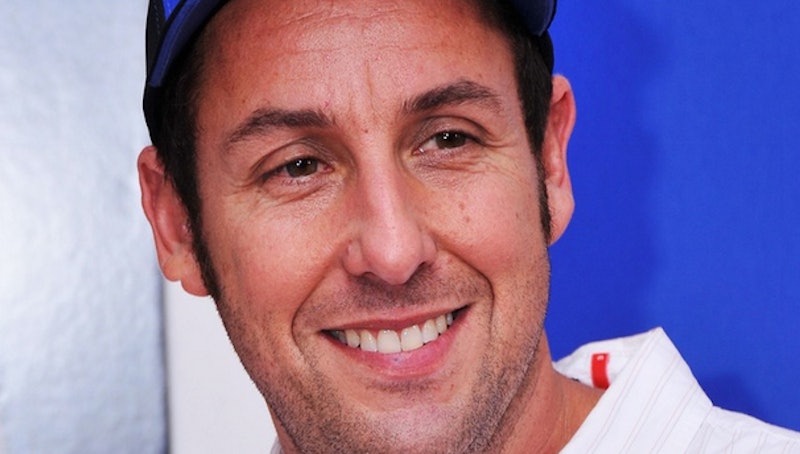 Last April, a group of Native American actors and extras in Adam Sandler's upcoming Western spoof The Ridiculous Six reportedly walked off the set after a producer suggested they leave if they were offended by the crude stereotypes and racist jokes found in the script. According to The Wrap, several of the movie's actors were offended by characters being named Beaver's Breath and No Bra, as well as a scene involving an Apache woman urinating while smoking a peace pipe. Though producers reportedly insisted the jokes weren't meant to be offensive or disrespectful, some of the Native actors who left the set took to social media to criticize the film. Now, Sandler has spoken up. According to The Hollywood Reporter, the actor told journalists on Saturday that the incident was "just a misunderstanding," and called The Ridiculous Six a pro-Indian movie.

Talking to ScreenCrush, Sandler defended the movie's depiction of Native Americans, and said that his goal was never to offend. Said the star, “I talked to some of the actors on the set who were there and let them know that the intention of the movie is 100% to just make a funny movie. It’s really about American Indians being good to my character and about their family and just being good people. There’s no mocking of American Indians at all in the movie. It’s a pro-Indian movie. So hopefully when people see it — whoever was offended on set and walked out, I hope they realize that, and that’s it. It was kinda taken out of context.”

Little detail and no clips of the movie have been released so far, so in Sandler's defense, perhaps the film does present its Native characters in a humorous, non-offensive light. Still, it seems easier for him to brush off the incident as a simple misunderstanding on the part of the Native actors than to address the issues head-on. His comments appear to shift the blame onto the actors for not "getting the joke" or for being "too sensitive," rather than the film and its makers for portraying its characters in what several of its cast members deemed derogatory ways.

Although Sandler's comments this weekend are certainly a start, the actors who walked off the set warrant more of an explanation for why he and the producers didn't seem to take their complaints about the script as seriously as they should have, especially considering Sandler's history of promoting racial stereotypes and caricatures in his movies. The actor may insist that the jokes that prompted Native actors to walk off the Ridiculous Six set were all meant in good fun, but his cast deserves a greater explanation for the laughs supposedly made at their expense.