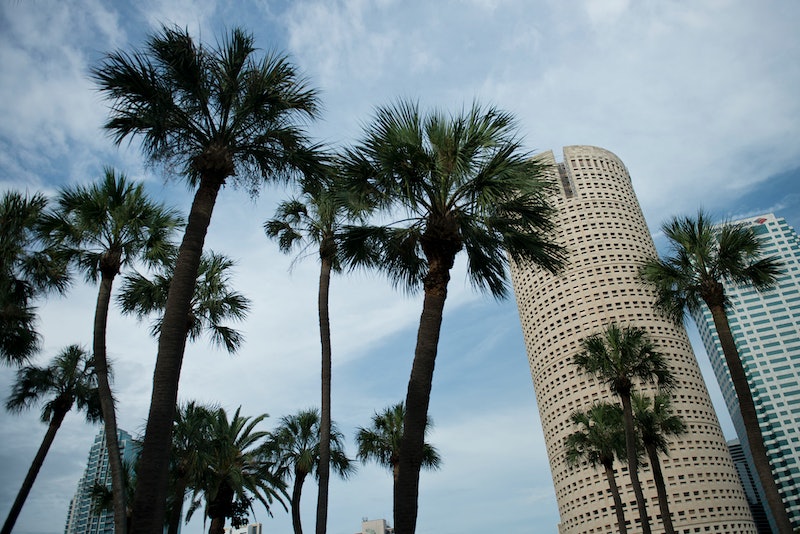 For many people around the country, summer means not just heat, but worse — sweat. But interestingly, not all hot places are created equal: Sweatiness is actually more related to humidity and population density than straight-up temperature. That's why the majority of the 10 sweatiest cities in America are located in the more humid pockets of the country — and if you happen to live in one of those pockets? You are probably stronger than the rest of us. Because swampass is no joke.

I just got back to Los Angeles after spending the first half of my summer in New York, and I'm just beginning to realize how much I used to take for granted the concept of dry heat. Everyone thinks that LA weather is perfect because we have mild (nonexistent) winters, but we also have hot, dry, summers, because we're basically a desert. The East Coast, by contrast, has gross, wet heat, that makes you feel like you're constantly walking around an indoor pool. I thought there was no way LA was going to make the list: I'm sitting outside in long sleeves on a July morning. But it turns out that I was wrong, because we're number eight on the sweaty list.

The Makers of Honeywell Fans paired up with scientists at the environmental consulting company called Environmental Health & Engineering in order to determine the list of the 10 sweatiest cities in the United States. The scientists reached their conclusions by analyzing data including geographical location, average temperature, population density, wind patterns, and infrastructure.

Living in a humid city can feel like you're living in Dante's actual first circle of hell if you're not careful. Staying hydrated and making small lifestyle changes (like wearing loose, light fabrics and keeping your hair tied up and off your neck) can go a long way in making you feel a bit less like dying every time you step outside.

So, does your city make the list? Check it out below:

Charlotte has an average July temperature of 78.5 degrees, and is the 17th most populated city in the US.

The average July temperature in Dallas is a toasty 86 degrees. Sweat City.

I maintain that LA is misplaced on this list, but evidently being the second most populated city in the country got us on it. Honestly, the data is probably just skewed because of how much we all sweat during SoulCycle and hot yoga.

It looks like North Carolina is one sweaty place to live. Raleigh has an average July summer temperature of 81 degrees, and it has that nice southern, swampy thing going for it to amp up its humidity game.

I hope someone shaved down Bo Obama's fur coat in preparation for the 80 degree average summer weather. Side note: do dogs sweat?

Anyone who's ever been to Disney World in the summer can vouch for Orlando's sweltering, sticky weather.

I swear I'm not just being defensive of California, but this also seems out of place to me. San Diego is hot, but it just doesn't get that sticky. I'm giving this list major side eye right now.

Houston has an average summer temperature of 83 degrees and super high humidity, which lands it in the third spot.

Florida really dominates this list, with Tampa (that's it up top, by the way) clinching the title of "sweatiest city in America." You go, Tampa.