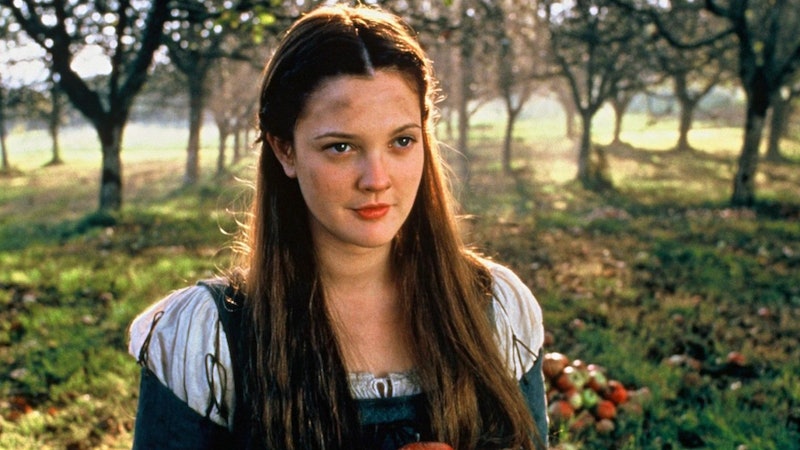 If you have yet to see Ever After, a '90s live action version of the fairytale Cinderella, you are seriously missing out. The retelling of the traditional story is just beautiful, not to mention the wonderful costumes and iconic Ever After renaissance inspired hairstyles are on point. It's also lovely to see Drew Barrymore in her 20s and at a really pinnacle point in her career; well aside from when she was thrown into the spotlight with E.T. the Extra-Terrestrial and, of course, her starring role in Charlie's Angels.

Barrymore's role in Ever After was quite different to her other characters, as she played a well spoken, ladylike princess. But she still had the gutsy protagonist vibes that she is famous for in some of her other roles. Heck, she even opens a can of Charlie's Angels style whoop ass on her evil step sister (who totally deserves it by the way).

Ever After is the perfect movie to channel during summer. The floaty, feminine gowns are just gorgeous, yet they might look a little out of place in our modern world. However, with the popularity of braids and elegant up 'dos — most likely due to the ladies of Game of Thrones — the hairstyles from Ever After would look lovely worn to a summer ball, a party, or even a festival. So here are some of the most iconic hairstyles from the movie so your hair happily ever after needn't be just a dream!

Even dressed in peasant clothes and covered in dirt, Barrymore's character Danielle de Barbarac still manages to look lovely. It just shows that beauty truly does come from within; Danielle is kind, considerate, and a generally all-around nice person.

This style is such a simple yet effective look that would work equally well for a day at the beach or a night out with friends. It is quite a feminine look, so it might work best with a romantic ensemble such as a floaty chiffon dress.

You could create a similar look by crafting a braid on each side of your part and tying them together at the back of your head. Alternatively, "Taniathepirate" of YouTube shows her viewers how to get a similar style in the first part of her tutorial.

This divine, crown-like headpiece is a stunning addition to Danielle's more formal attire. She wears her hair pulled back, with what appears to be a chignon comprised of braids at the back of her head, and then finished off with an elegant hair accessory.

This is a great look if you're wanting to give off some regal vibes like Danielle, and I imagine it would look incredible paired with a white, lace dress. Better yet, why not channel Danielle and her crown on your wedding day?

A style such as this would be perfect for a bride.

This is probably one of the most memorable and iconic scenes of the movie; where Danielle pulls a Cinderella and crashes the ball. However, unlike the original, she does not have a fairy godmother (unless you count her almost fairy godfather Leonardo da Vinci), so she wears a wondrous gown and shoes that were once her mother's accompanied by some wings crafted by da Vinci himself.

To accompany her otherworldly attire, Danielle wears magical, sparkling glitter and jewels on her face, which IMO make her look like an angel. My love of ethereal beauty was probably born out of watching this scene.

To complete her ensemble, Danielle's hair is worn in a crown style braid and decorated with glittering ribbon and gems. Kayley Melissa has a fabulous tutorial on how to create a crown braid; you would just need to add the finishing, sparkling touches.

I love this look and it's such an easy way to inject a hint of elegance into a simple hairstyle. Danielle is wearing a decadent, pearl embellished hair piece in the style of a net, which is placed at the back of her head. A braid is plaited around the rim of the net, presumably to keep it in place, and she wears the rest of her hair down.

This would be a lovely choice as an alternative headpiece to wear to the races or to a formal event.

Danielle's step mother and step sister were bad to the bone — Danielle's other step sister Jacqueline was much kinder to her — but you have to admit they also had a wicked sense of style. They wore the most luxuriously outrageous headdresses whenever they had the chance and they totally pulled them off. Although these headdresses may not have the same effect they did in the Renaissance period, you can take inspiration from this epic headgear.

Be inspired by evil step sister Marguerite and her peacock feather headband; this style, however, is a little more subtle than Marguerite's plumage filled headpiece.

Whichever look you prefer, you're sure to have a happy ending in these fairytale hairstyles. Grab your prince (or princess) and make sure to be home by midnight!

More like this
The Best Hairstyles From The 2023 Grammys
By Olivia Rose Rushing
Pamela Anderson's Most Iconic Makeup & Hairstyle Moments
By Olivia Rose Rushing
9 Valentine's Day Hairstyles For 2023 That Look So Dreamy
By Audrey Noble
'Love Island's Will Got A Farm Animal Manicure & It's *Adorable*
By Sam Ramsden
Get Even More From Bustle — Sign Up For The Newsletter
From hair trends to relationship advice, our daily newsletter has everything you need to sound like a person who’s on TikTok, even if you aren’t.