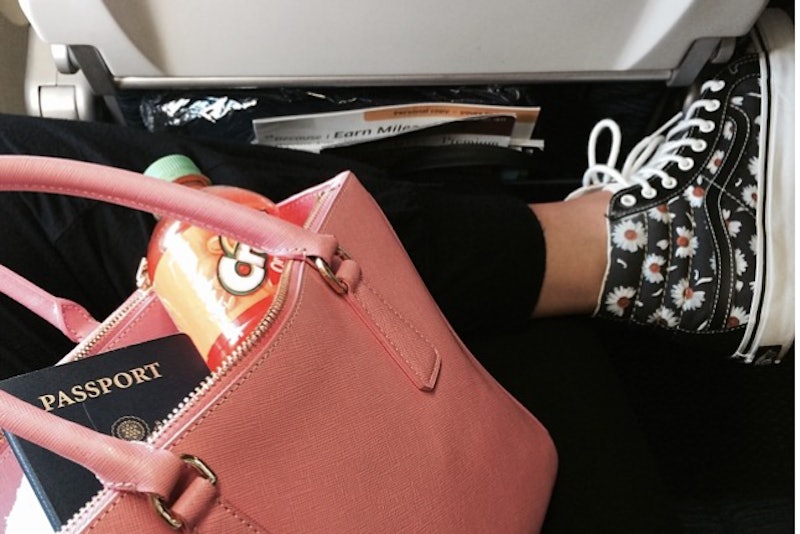 Social media would like to remind you that just because models get to pose in name brand labels, walk international runways, and have their picture plastered across billboards on all major highways does not make them any less human than you or I. Gigi Hadid's airport accessories featured Ray Ban shades and a bagel this weekend, further proving that just because it's her job to look good, she is no more immune from suffering through all the everything bagel and cream cheese feels you and I endure on the reg.

With such a hectic schedule, Hadid is almost always on the go, documenting her travels on all social media accounts and effortlessly sparking some major travel style inspo. So while, unfortunately, we wont be swapping clothes and gabbing about the latest True Detective anytime soon, we can at least scroll through Hadid's many on-the-go ensembles for some ideas.

Check out nine additional times Gigi Hadid gave us all the travel style inspiration a girl could want — and yes, some of them involve food. Naturally.

After a quick trip to Canada to support Formula 1 World Champion pal Lewis Hamilton take home the GP win, Hadid makes her way back to the big apple equipped with a knit sweater, brown suede bag and heeled boots.

2. Dilly Dallying In The Desert

Beating the heat with mirror shades in a "Current Emoji" T-shirt courtesy of designer and older sister Alana Hadid. I'm thinking that cool, calm and collected smiley is deceiving if she's actually in the desert.

3. On The Move With Moschino

Seriously though, Gigi Hadid is the only person who can take a plain, long sleeved black crop top, pair it with white knit pants, throw a Moschino cross over bag detailed with chain strap and make a laid back on-the-go style look chic.

Gigi Hadid is a regulation helicopter hottie in her ripped jeans and tank top. Note the representation of the New York Yankees. Beauty and brains right there.

8. Accessorized With Soda And Sneaks

Gigi Hadid would like us to know the only way to ride the sea is in ripped denim and bare feet.