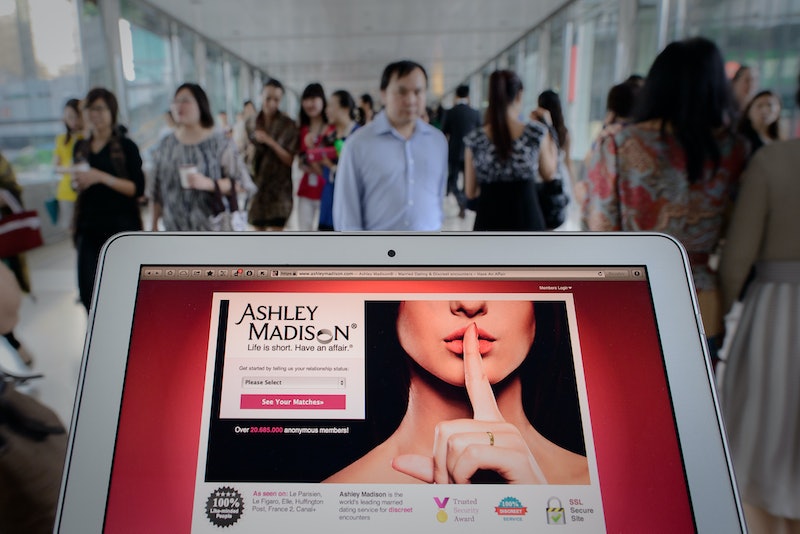 In case you’re late to some of the biggest news of the day: Ashley Madison was hacked. The extramarital-dating site, whose slogan is "life is short, have an affair" definitely has a messy affair on their hands at the moment. The news broke this morning on the blog KrebsOnSecurity that Ashley Madison and its partner sites had been hacked, putting millions of identities, that were supposed to be anonymous, at risk. The hackers, who call themselves the Impact Team, claim to have gotten their hands on millions of pieces of private information and are threatening to release it.

At the moment, Ashley Madison’s parent company Avid Life Media says they have secured the situation and says the site is still up and running, but that doesn’t change the fact that so much information, including “customers' secret sexual fantasies and matching credit card transactions, real names and addresses, and employee documents and emails,” is in the clutches of hackers who know exactly what type of damage can be done.

Here's why a huge dating site like Ashley Madison can fall victim to such a thing.

As CNN points out, the type of information that Ashley Madison has makes for millions of possible blackmailing schemes. All the hackers would have to do is realize they have a millionaire or someone famous in that collection of information they just collected, and they could be rolling in the dough.

2. They're A Prime Target

Honestly, I’m in no place to judge the morals of others. If you want to cheat on your husband or wife, then that’s your choice. But, recent studies show that people still consider extramarital affairs immoral, so Ashley Madison is basically a prime target for hackers, because of the business they’re conducting.

3. The Hackers Claim Ashley Madison’s Parent Company Is Lying About A Key Feature

According to KrebsOnSecurity, the Impact Team published a manifesto when they stole the account information explaining they're upset that the “full-delete” option that Ashley Madison claims will erase a member’s entire profile for $19 doesn’t actually exist. The Impact Team says that Avid Life Media made $1.7 million in revenue last year alone on the service that doesn’t even delete everything as it promises to do.

4. It's Sensitive Information Can Be Personally And Professionally Disastrous

In addition to possibly blackmailing people out of money with the threat of exposing the fact that someone is an Ashley Madison member, the information the company has is so sensitive that it can just be straight up life-ruining. We're not talking about just getting money from members or even using their credit card numbers in other places, but with access to intimate sexual fantasies of members, there's no telling how much damage the hackers could do if they really wanted to. It's going to be really hard to look your boss in the face when she finds out all the dirty things you've been writing on Ashley Madison's site to your future mistress when you were supposed to be working.