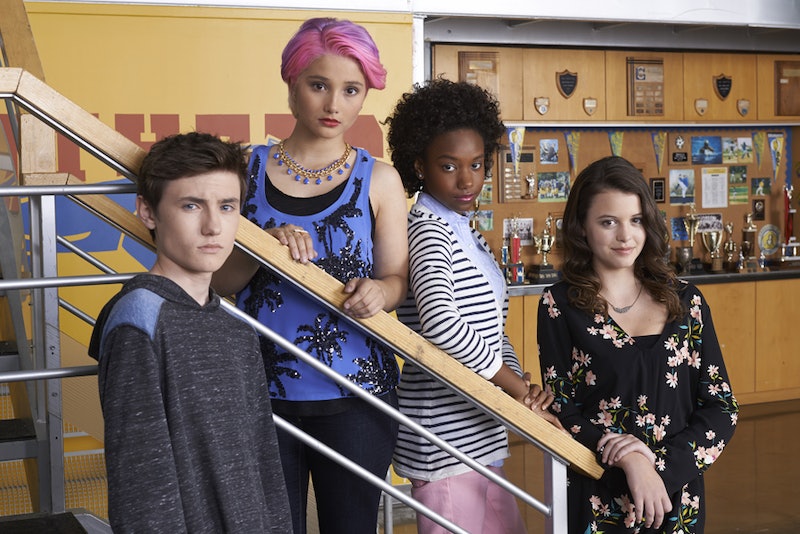 It really is the end of a television era: Degrassi is leaving TeenNick after 14 seasons on the network, and will instead begin streaming new episodes on Netflix in 2016. But while Degrassi will be leaving the network, fans can still tune in to TeenNick for one last semester at Degrassi Community School. Degrassi will air its final summer season on the network beginning on July 20, after which we'll likely say goodbye to some beloved series regulars like Clare (Aislinn Paul), Eli (Munro Chambers) and Imogen (Cristine Prosperi). The goodbye tour begins this summer, so if you're a fan who has missed a few of the more recent Degrassi episodes, now is the perfect time to catch up.

Degrassi may have changed a lot over the years, but there is one thing that has stayed consistent, and that's the show's unending drama. The first half of Season 14 brought some serious drama: Clare had just found out she was pregnant, Zoe and the other dancers on the Power Cheer squad got entangled in some serious risky business, and Miles struggled to deal with his manipulative father's abusive ways.

Forgot some of the details of the storylines? Don't worry — study up with this handy cheat sheet and you'll be all caught up when Degrassi returns on Monday.

After learning that Clare is pregnant with what she believes is Drew's baby, Clare confronts her baby daddy. Clare wants to keep the baby, but Drew isn't so sure — he's not exactly ready to be a dad. Clare tells Drew that while she will raise the baby, he doesn't have to be involved at all, an offer that Drew nearly accepts until Dallas, a teen father himself (remember Dallas' son Rocky? Yeah, me either) criticizes him for chickening out of his responsibilities. Drew has a change of heart, breaks things off with his girlfriend Becky, and tells Clare that he's all in...

...but unfortunately, he's not the father of the baby. After going to a doctor's appointment, Clare learns that the timeline for her pregnancy is earlier than she thought — and that Eli is actually the father. That's too bad, because Eli totally slut-shamed Clare and became the absolute worst after he found out that his ex-girlfriend slept with Drew. After Eli learns that he is the father of the baby, he changes his tune completely and tells Clare that he will do whatever it takes to help out. Whether they can rekindle their romance is another story we'll get the answer to when Degrassi returns.

Miles and Tristan are officially A Thing when Season 14 starts up again, but Miles is not exactly the best boyfriend due to his dependence on weed to cope with his turbulent relationship with his father, who thinks that Miles' relationship with Tristan is hurting his political aspirations. Miles and Tristan breakup due to Miles' increasingly erratic behavior, and Miles' ex-girlfriend Maya grows more and more concerned and attempts to get Miles help. Unfortunately, Miles doesn't seem like he wants to move off of his destructive path.

Miles tries to convince his siblings Frankie and Hunter that his father is the bad guy in the situation. Tensions in the Hollingsworth household increase when Mr. Hollingsworth slaps Miles across the face for talking back to him. Miles eventually gets his siblings to see their father for who he is when their father picks them up from school after the school catches on fire, only to be more concerned for his political image than for his children.

Zoe grabs the Power Cheer reigns from Becky after Becky hurts her ankle in a cheer incident, but becomes frustrated by the school's lack of funds for the team. Zoe decides to fix the problem by selling off the one thing she wants control over after her sexual assault: her body. Zoe sets up an app with Grace that allows the girls on Power Cheer to sell off their anonymous nude selfies in exchange for cash. Zoe attempts to blame the nude scandal on Frankie after Frankie says she wants out, but is eventually forced to confront the truth in front of the school at an assembly.

It wouldn't be Degrassi if there weren't plenty of ships. This season, a few of them sailed while others, well, sunk. Imogen finally confronted Jack about being monogamous, and now they're officially a couple.

Becky and Drew ended things after the baby drama got too much, but it seems that Becky's new music partner Jonah may be a dark horse in the race for her heart.

Frankie and Winston are going strong, with Winston even helping Frankie take down Degrassi Nudes for good.

Alli and Dallas had a rocky few days after Alli told Dallas of her potential college plans in Europe, but they reconciled after a decidedly unsexy sleepover in a hotel.

Study Questions For This Season:

—Will Eli and Clare get back together? —Will Zoe get in major trouble for Degrassi Nudes? —Will someone please explain why Grace is in the "Rubber Room?" —Which Degrassi boy will be obsessed with Maya next? (Because they all eventually do.) —How does Lola's get her hair THAT pink?

Tune into the final season of Degrassi on TeenNick starting July 20.

More like this
Everything To Know About 'FBoy Island' Season 2
By Gretchen Smail and Radhika Menon
An 'Emily In Paris' Fave Is Joining Season 5 Of 'The Crown'
By Bustle Editors
Emma Thompson, Lashana Lynch, & Stephen Graham Lead Netflix’s 'Matilda'
By Sophie McEvoy
Why You Loved 'One Tree Hill' So Much — And Still Do
By Sabienna Bowman and Radhika Menon
Get Even More From Bustle — Sign Up For The Newsletter