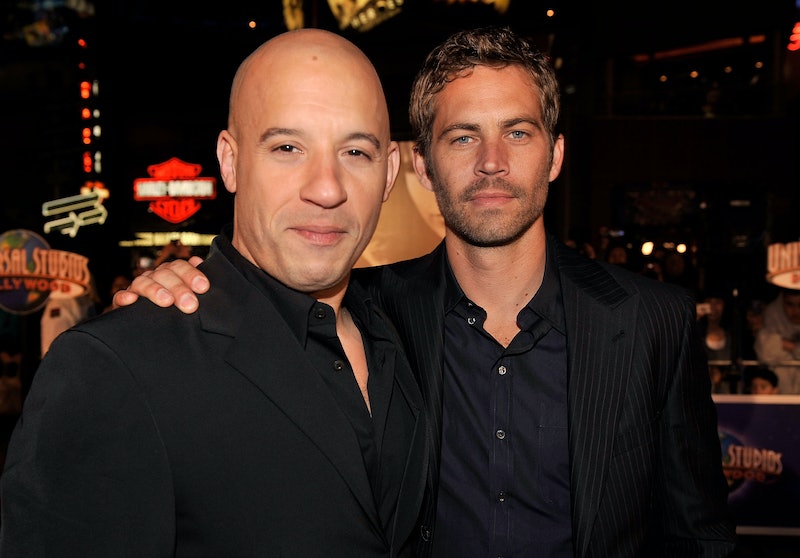 In the wake of the tragic car accident that killed 40-year-old Paul Walker, a question fans can't help but ask is, what does this mean for Fast & Furious 7? The seventh film in the franchise, a series Walker was most known for, is currently still filming according to IMDB and was slated for a July 2014 release. Cast member Vin Diesel shared photos from the set in September as work on the movie commenced, so it's safe to say that only a few months later, the entirety of the filming has yet to be concluded. But maybe that's for the best. Certainly Paul Walker deserves some sort of tribute through his much loved character Brian O'Connor.

Hollywood Life is reporting a source close to the film's cast said "many people within the production haven’t even heard the tragic news because of the holidays, but it's almost positive that the movie will still move forward in [Walker's] honor. Once people get back to work on Monday, many meetings will be happening.”

A rep for Universal, the studio behind the movie, released this statement following the sad news of the actor's passing.

All of us at Universal are heartbroken. Paul was truly one of the most beloved and respected members of our studio family for 14 years, and this loss is devastating to us, to everyone involved with the 'Fast and Furious' films, and to countless fans. We send our deepest and most sincere condolences to Paul's family.

The star's death has upset many: from his fans, to his co-stars, to fellow celebrities, and it seems fitting that the franchise pay tribute to him. Dealing with an actor's death in an ongoing series can be tricky. In Harry Potter they recast Dumbledore when Richard Harris died after only two of the films were completed. The film chose to act like there had never been a change. Glee handled the death of Cory Monteith with a tribute episode to his character, Finn, but refused to say how he died. Chris Colfer's character, Kurt, got that question out of the way in the show's opening moments saying, "Everyone wants to talk about how he died, too, but who cares? One moment in his whole life; I care more about how he lived."

But there's some fans, and one in particular, who want F&F 7 to talk about how Walker died. Nishant Soni said:

I want James Wan [the director] to sequentially study the tragic accident and exactly recreate it on the screen with a Red Carrera GT hitting the pole and killing Brian in Fast and the Furious 7. Make some changes to story line if you have to ... He is a hero, give him a hero's death but an original one. Recreate reality. Ride or Die, remember?

This might hit a little too close to home for the actor's friends and family, though. Wan, the director, expressed his grief on Twitter and the emotion behind his words make me think he wouldn't be able to recreate Walker's actual death for the film.

But as these next days continue and those meetings that Hollywood Life reports supposedly happen, I'm sure we'll see how the studio and the filmmakers plan to continue without Walker. No doubt about it, he does deserve some kind of tribute, even if it's as simple as a dedication to him at the end of the film.