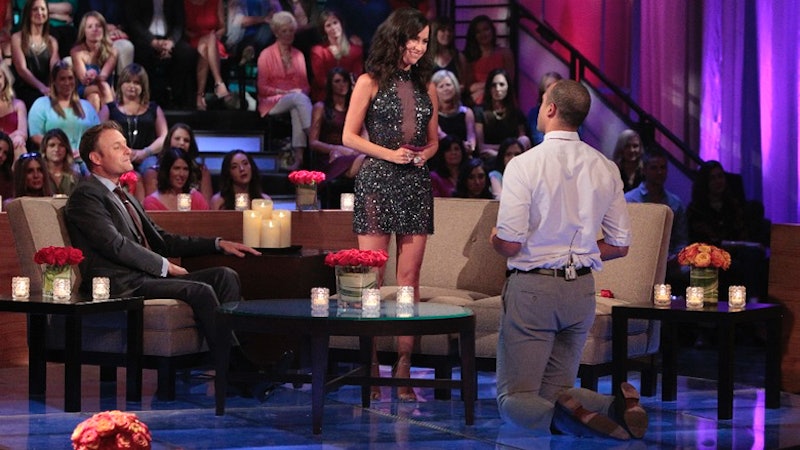 There’s no former Bachelorette contestant from Kaitlyn’s season of mostly miscreants (you guys they couldn’t even identify female parts during the sex-ed date) worse than Ian. Smart, handsome, and funny (especially in his own mind), Ian seemed a clear, quality frontrunner for Kaitlyn’s heart. That is, until he went and screwed it all up when he horrifically insulted Kaitlyn to her face. So, on Monday, did Ian apologize to Kaitlyn during The Bachelorette: Men Tell All, or did he double down on his jerkdom?

First, let’s travel back to “the incident.” Ian didn’t feel like Kaitlyn was spending enough time with his special snowflake self, so he decided to tell her exactly what he thought about her and her quest to find true love on TV. Gems from this conversation include, “I came here to meet the girl who got her heart broken and was devastated by Chris Soules, not the girl who wanted to get her field plowed,” and “I really see you as a surface level person at this stage, and I wonder if you’re really that shallow.” He also bragged about being a model and going to Princeton and traveling the world and I don’t know what else because I blacked out.

Yes, all of that happened. Needless to say, Kaitlyn was pissed and she and Ian both agreed he needed to GTFO before she socked him. That was the last we saw of Ian until Monday's Men Tell All special. After being called out for being a Grade-A jerk to Kaitlyn and the contestants, Ian literally talk off his jacket and got down on his knees for his mea culpa.Though the words he was saying were all about apologies and how much he loves his mother, the whole thing felt so fake, and he totally made it seem like a joke. I mean, his sleeves were pre-rolled in his coat, so he totes knew he was going to take his jacket off.

When Kaitlyn came out, Ian got back on his knees (before getting a cramp and standing up) and told her he's sorry for any backlash that she got based on his comments. Isn't that like a non-apology apology? Like a "sorry you were offended by my words"?

I don't know if I buy it, honestly. I guess we can say that he tried and leave it at that — Ian doesn't need our words, anyway. He's a Princeton grad and a world traveler, you guys!